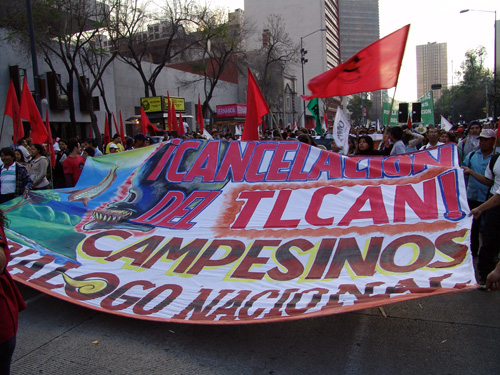 ’This is life or death for us’: Mexico’s farm movement rejects new NAFTA agreement

The smooth ride to a new North American Free Trade Agreement (NAFTA) may have just hit the bumpy roads of rural Mexico. On Tuesday, leaders of Mexico’s farm movement strongly condemned the new agreement announced between the United States and Mexico, calling on the new president they supported in recent elections to get involved and slow the race to the new agreement.

“We need to push our new president to stop the signing of this agreement,” said farm leader Gerónimo Jacobo in an interview. “This is life or death for us. With NAFTA it will be a slow death. Our national sovereignty is at stake here!”

On August 27, U.S. President Donald Trump announced he had reached a deal with the Mexican government on a new version of the NAFTA. In a garbled televised phone call, the president congratulated lame duck Mexican President Enrique Peña Nieto, claiming he had fulfilled his campaign promise to “replace NAFTA” and christening the new deal “The U.S.-Mexico Free Trade Agreement.” For his part, Peña Nieto, whose party was trounced in July 1 elections, claimed the agreement as his legacy.

No one, though, could claim they actually had a new NAFTA. Canada, NAFTA’s other commercial partner, was left out as President Trump rushed to meet a self-declared deadline that would allow the agreement to be signed by Peña Nieto, before Andrés Manuel López Obrador takes office December 1. Canada was offered the opportunity to join the agreement, though negotiations continue.

Surprisingly, representatives from the incoming government of López Obrador (also known as AMLO) participated as observers and endorsed the new agreement. Jesús Seade, López Obrador’s designated NAFTA negotiator, raised a few small issues in the last days of the negotiations, but publicly supported the deal, a stance widely seen as trying to ensure financial stability in the transition to his new government. It was surprising because the incoming president had been a strong critic of NAFTA in the past.

Farmers: Not so fast!

What was surprising to Mexico’s energized farm movement were the anti-agriculture biases in the negotiated text. The movement had gone all-out for López Obrador and his Morena party, turning out more than 50% support across rural Mexico, unprecedented in a country in which the ruling Institutional Revolutionary Party tightly controlled the rural vote. They did so because the candidate had publicly signed on to their radical program for farm reform, the Plan de Ayala 21st Century, after Emiliano Zapata’s original rural reform program early last century. (See my previous article.)

The new program called for support for small-scale farmers of maize and other staple crops as part of a campaign to restore food self-sufficiency in a country that now imports some 46% of its food, mostly from the United States. The Plan de Ayala also called for a renegotiation of NAFTA to stop U.S. farm products from flooding Mexico with cheap, subsidized crops.

The new agreement fails to allow Mexico to protect staple crops from such U.S. agricultural dumping. New research from the Institute for Agriculture and Trade Policy shows that U.S. maize (corn) has been exported in the last three years at prices 10% below what it cost to produce. Wheat has been exported 33% below the costs of production, and rice as also seen a dumping margin. All three crops are priorities for López Obrador’s new Office of Food Self-Sufficiency, to be headed by longtime farm leader Victor Suárez.

At Tuesday’s press conference, farm movement leaders rejected the new deal and called on the current government not to sign it, deferring the decision to the new president with his overwhelming mandate. (His party won 53% of the vote in a five-person race and took majorities of seats in both the House and the Senate.) In a statement, leaders said NAFTA is responsible for the impoverishment of small and medium-scale farmers.

They denounced the new agreements on biotechnology as a backdoor way to force genetically modified maize and other crops into Mexico. López Obrador has been clear since the election that his administration will no longer allow the use of GM maize and soybeans. Farmers fear the new NAFTA could compel him to do so.

López Obrador has been clear since the election that his administration will no longer allow the use of GM maize and soybeans. Farmers fear the new NAFTA could compel him to do so.

Similarly, there are rumors that an annex to the agreement would bar Mexico from putting labels on food packaging warning consumers about fattening, sugary, and unhealthy food. In other countries such measures have proven effective, and Mexico faces a growing obesity epidemic attributed significantly to imported processed food and sodas. Another provision could make it difficult for the new government to pay support prices to small-scale farmers as a way to stimulate local production.

With the actual text of the agreement still secret, farm leaders demanded that the full text be made public and that the new congress hold hearings on the agreement before it is signed.

“We have ghost towns because of NAFTA”

“Peña Neto shouldn’t sign it,” farm leader Rocío Miranda told me. “He has presided over a terrible increase in hunger. We have ghost towns in rural Mexico because of NAFTA.”

Miranda said she is very optimistic about the government’s commitment to small-scale farmers. “The new government represents the people harmed by NAFTA.” But she hopes López Obrador will step in to ensure that the new NAFTA does not contradict his ambitious rural agenda.

“The farmers’ movement is concerned,” she said, as negotiators wait to see if Canada will sign on before the end of September. “The new NAFTA could undermine our efforts to regain our food self-sufficiency.”