There’s been an outcry against secretive trade talks, with thousands joining rallies around the country.

The target of the protesters’ anger in 17 towns and cities is the Trans-Pacific Partnership Agreement.

The cry rang out from thousands of protesters in Auckland, with the other main centres seeing similar marches and outrage throughout the afternoon.

"I just wish that we could have more transparency. And then we would feel more comfortable about things," one protester told ONE News.

Twelve countries around the Pacific are involved in negotiations. The Ministry of Foreign Affairs and Trade says a deal would open up trade in goods and services, boost investment flows and promote closer links across the region.

But critics say there’s too much secrecy.

"I don’t like the idea of the government signing agreements that they’re not prepared to let us know about," a protester said.

The worry for the protesters is that the agreement would surrender New Zealanders’ rights to other governments and overseas corporate interests.

The concerns in Auckland were echoed in Christchurch and Dunedin.

"There’s a lot of effects for all of us and they’re being negotiated in secret," a Christchurch protester said. 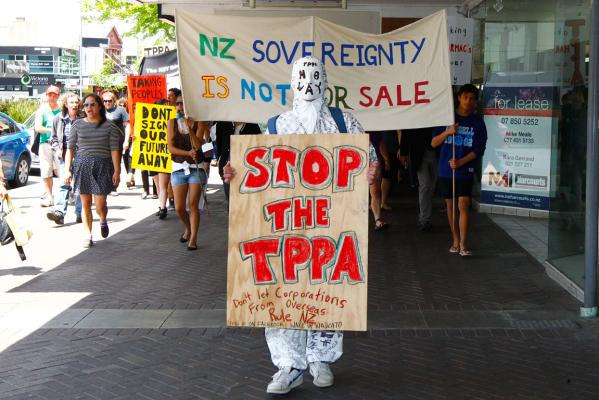 A Dunedin demonstrator said: "Once this TPPA kicks into action, the corporate takeover of New Zealand is imminent. We’re going to be stuffed."

Green Party co-leader Metiria Turei says there’s a real issue about it being a policy agreement "where the controls on regulation and policy are determined by others outside of the New Zealand borders and not by its citizens".

Campaigners are not deterred by rumours that the TPPA may soon be signed.

"It hasn’t been put through yet so there’s more than enough time," one protester said.

The fight still has some life in it yet.