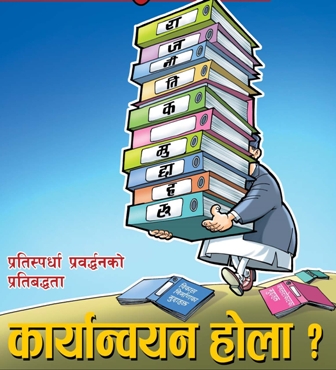 (Cartoon by Abin for SAWTEE)

TIFA: Where is our homework?

The media is abuzz with reports that Nepal is planning to sign a bilateral FTA (BFTA) with the US and to this end a high-level delegation from Nepal is leaving for the US in three weeks’ time to sign Trade and Investment Framework Agreement (TIFA) – a precursor to the BFTA. While there would be several rounds of discussions before the FTA is eventually signed, we need to do our homework even before signing the TIFA as correctly pointed out by the editorial of Nagarik Daily dated Feb 12. This involves, at a bare minimum, consultation with all the stakeholders, which are going to be affected whether positively or negatively by such an agreement. However, that has not happened so far, to the best of my knowledge.

In the context of Nepal, one of the prominent forces that has thrown its weight behind TIFA is the readymade garment sector, which has seen a precipitous decline in its exports to the US market, particularly in the aftermath of the complete phasing out of quotas under the Agreement on Textiles and Clothing (ATC) of the World Trade Organization (WTO) on Jan 1, 2005. Not that our garment industry was doing great in the US market prior to this because the export started declining ever since the US, the then largest market for Nepali garments, provided preferential market access to a select group of countries such as Sub-Saharan African countries through African Growth and Opportunity Act (AGOA), Caribbean countries through Caribbean Basin Initiative (CBI) and several countries in the Middle East such as Jordan through free trade agreements. These initiatives were over and above the North American Free Trade Agreement (NAFTA), which had provided near-zero duty access to a country like Mexico to the US market.

At present, while Nepali exporters reportedly pay up to 12 percent tariff on an average to access the US market for woven garments, countries such as Lesotho, Jordan, Mexico and Honduras pay only 1.9 percent, 0.41 percent, 0.24 percent, and 0.07 percent respectively for the same category of products. This is because Asian least-developed countries such as Bangladesh, Cambodia, Nepal and Laos have neither signed any FTA with the US, nor do their textiles and garments qualify for any benefit under the preferential market access provided by the US under the Generalized System of Preferences (GSP), despite their economic status.

In the face of plummeting exports, Nepali garment entrepreneurs were hopeful of getting duty-free-quota-free market access to the US market under the Doha Development Agenda (DDA) of the WTO, but the tardy pace of DDA means that they are unlikely to get such benefits in the near future. They also lobbied hard to get zero tariff access to the US market through Tariff Relief Assistance for Developing Economies (TRADE) Act, but this initiative has so far proven to be elusive. The only option left for them to get zero tariff access to the US market was to convince the government to sign a BFTA with the US, which they seem to have done in a skillful manner. However, the TIFA text does not contain any language relating to tariff concession per se.

At present, while Nepali exporters reportedly pay up to 12 percent tariff on an average to access the US market for woven garments, countries such as Lesotho, Jordan, Mexico and Honduras pay only 1.9 percent, 0.41 percent, 0.24 percent, and 0.07 percent respectively for the same category of products.

Moreover, it is not only tariff barriers that prevent developing-country exporters from successfully accessing the US market; there are a whole range of non-tariff barriers that can impede trade flows. One such barrier is the rule of origin (ROO) requirement. As per the “yarn forward” requirement, which is the hallmark of US FTAs, it is necessary to either use the fabrics and accessories manufactured in the exporting country or in the US to qualify for duty free access. Since Nepal does not have the necessary manufacturing capacity to supply the basic raw materials, it will have to import them from the US and process them before exporting to the US. One could imagine the ensuing hassles as well as cost escalation resulting from the mandatory requirement to use US raw materials. Whatever benefits Nepal derives in the form of tariff concession will be completely eaten up by the cost escalation associated with the use of US-made raw materials.

Moreover, discussions with the office bearers of Garment Association of Nepal as well as media reports reveal that even when they have been receiving inquiry from various buyers, including from the US, they are reluctant to receive firm orders because they are not sure that they will be able to execute them. This is because of the present political situation of the country (including strikes and road blockades) and “labor militancy” that have crept in of late. What would be the fate of our garment industry, if we are provided with the tariff concession as well as favorable ROO, and they receive the orders, but cannot execute them because of our own political problems? This relates more to our domestic reform agenda to improve our business climate than the TIFA itself, but our preparation to take advantage of the possible opportunity of concessional market access post-FTA is a must.

Any country desirous to sign a bilateral FTA with the US should be wary of five major contentious issues, namely investment, services, intellectual property rights (IPR), environmental standards and labor standards, first four of which are invariably higher than the WTO requirements and the last issue does not exist in the WTO at all. Accordingly they are called “WTO-plus” requirements. All of these issues have been included in the proposed TIFA.

While the provision on “investor-to-state dispute” and “deemed expropriation” modeled on Chapter XI of the NAFTA can be deleterious to our national interest, the “negative list” approach to services negotiations can result in the loss of policy space which we have managed to preserve during the process of our accession to the WTO. Similarly, the wordings of the TIFA on IPR can potentially oblige us to seek membership of various international conventions relating to IPR, including the International Union for the Protection of New Varieties of Plants (UPOV), which we resisted during our accession to the WTO with a view to protecting our farmers’ traditional rights to save, replant, and exchange seeds, among others. Finally, the wordings on labor and environmental issues could be used either to ratchet up our standards, which are costly to comply with or as a form of disguised protection. If we are unable to match these standards, our products can be denied market access thereby rendering the entire bilateral FTA meaningless.

Some countries such as Singapore, Bahrain, and Morocco have literally signed on the dotted lines bestowing full faith on the US trade negotiators to protect their interests while signing BFTA with the US. Others like Jordan and Peru have negotiated several provisions to protect their vital national interests. Similarly, Malaysia and Thailand, which too are negotiating BFTA with the US, are following an extremely cautious approach in the negotiations.

With so much at stake and ample list of good and bad practices to learn from, it would be suicidal to go ahead and sign the TIFA without consultation with stakeholders and adequate homework. This is particularly so because history is witness to the fact that such preparatory work, despite their tedious nature, not only helps our negotiators better negotiate agreements but also to sell the agreement to their constituencies, which will ease the process of implementation once the agreement is signed.