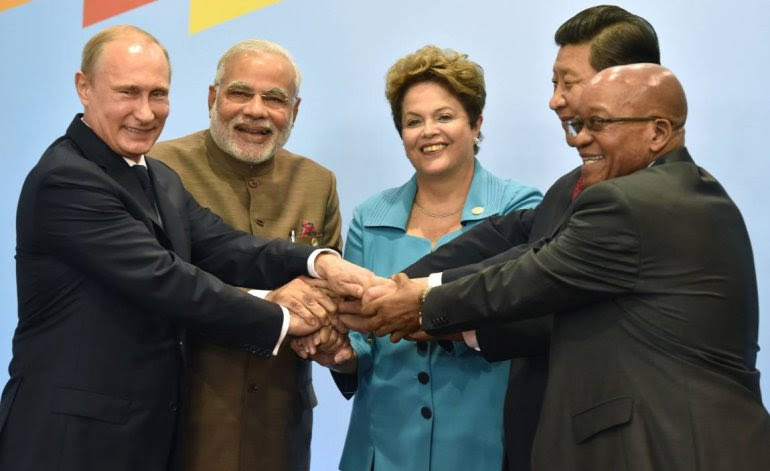 Freely translated by Anoosha Boralessa (Aug 2015). Not reviewed by bilaterals.org or any other organization or person.

The central banks of BRICS bloc bet on the New Development Bank, while the central countries put their money on TiSA: free trade in services.

On 7 July 2015, the Central Banks of the block of countries known by the acronym the “BRICS” (Brazil, Russia, India, China and South Africa) concluded an agreement governing the functioning of the New Development Bank (NDB) and a Contingency Reserve Fund. The head of CEPAL, Alicia Bárcena, qualified this agreement as “the most important multilateral financial agreement since the creation of Bretton Woods.”

The Bank has an initial capital of 50,000 million dollars and this would later be increased to 100,000 million. Its members account for 27% of the global GDP. Its objectives are to finance important development plans in BRIC countries. As such, the reserve fund (for another 100,000 million dollars) will be used to grant loans to participating countries when problems of dollar liquidity arise. In this way, the BRICs seek to establish alternatives to traditional hegemonic institutions such as the International Monetary Fund or the World Bank; to mould these alternatives into sources of financing taking a more inclusive perspective, continuing their search for a greater degree of financial independence from the big powers.

The central countries, for their part, are not left behind. For example, negotiations began in March 2013 that led to a final agreement, on free trade in services (TiSA according to its English acronym). Potential members that include the European Union, the United States, Japan, Australia, Canada, Mexico, Uruguay, Costa Rica, Paraguay, Colombia, Chile and Peru together represent 75% of global trade in services. The project was the target of harsh critics throughout the world, not only due to the lack of transparency in its negotiations, but also because of the contents of the classified information disclosed on Wikileaks. However, there is no need to turn to the draft, to understand its general features.

According to one of the documents on the treaty that the European Union officially disclosed, TiSA proposes to go much further than GATS (the General Agreement on Trade in Services), an institution established in the mid-1990s, under the WTO framework. What TiSA proposes is the establishment of a horizontal discipline of “national treatment” for all service sectors. Thus, one draft of the treaty provides that national governments are expected to allow private capital sourced from other member states to enter the health, education and water services sectors. The agreement restricts states’ power to regulate these service providers. This would generate serious limitations for the most vulnerable sectors of society to access such services. Such would be the case of public hospitals for example, which would compete, side -by-side with private entities, without any prospect of receiving any type of government subsidiary. This would gradually make it more expensive to use. Something similar would occur in the education sector.

It is clear that within these exceptions, it is provided that the European Union has the right “to regulate and introduce new regulations on tenders for services” within its borders in order to comply with “public policy objectives” while the laws and labour requirements in this region will continue to be applied.

Both the US and the EU take very similar positions. It is simply enough to glance at the US Secretary for Trade web page, headed, “Supporting US jobs through Exporting Services,” which defines TiSA as contributing to the expansion of exporting services and job creation in a sector where the US is “the World Leader”.

What is striking is this: no part of the draft refers to developing countries or the possible impacts that opening up service sectors could have on the rest of the world. This is no coincidence. As has already occurred on the map of world trade, the rhetoric of free trade governs barriers outside the most powerful countries, so that they can obtain new markets in peripheral countries to place their goods and services but without leaving their domestic industries unprotected.

Some days ago, in our brother country Bolivia, Pope Francisco said something that would appear relevant here. This is because rightly, the Pope lamented the existence of “new forms of colonialism that seriously affect the potential for peace and justice” and that “adopt distinct fronts such as certain free trade treaties and enforcing austerity measures that always tighten the belt of workers and the poor”. This echoes the declarations of the Minister for Foreign Relations of our country, Héctor Timmerman, who indicated that he was in favour of this type of agreement provided and when they benefitted both parties and provided they did not sacrifice a single job in Argentina.

It is fitting to highlight that in recent years, our country took a tough negotiating position. Its position was to prioritize national welfare before any intention of the big powers to impose treaties to the benefit of private capital. A conduct that at times is not replicated in some of our neighbouring countries that give more weight to the profits big corporate conglomerates can obtain with consequences that are not always judged to be in favour of the well-being of the people.