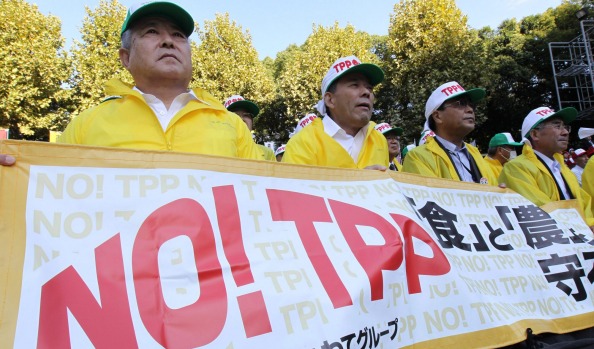 TPP protesters alarmed by corruption, urge leaders not to sign

Bribery allegations against Japan’s lead TPP negotiator have sparked public concerns that corruption may have influenced the corporate-friendly deal.

As the deadline for world leaders to sign the Trans Pacific Partnership, or TPP, approaches, protesters are heating up the fight against the controversial 12-country trade pact, including with a new petition signed by over 10,000 people overnight pressuring President Barack Obama and other leaders to not sign the deal as a bribery scandal swirls around a top Japanese TPP negotiator.

The petition was launched by the advocacy group Fight for the Future after news emerged Thursday that Japanese Economy Minister and lead TPP negotiator Akira Amari was embroiled in a corruption scandal accusing him of accepting at least US$148,000 from a private construction company.

Amari resigned over the allegations, but many are concerned that the bribery, though not clearly linked to the TPP, further compromises the legitimacy of the secretive and business-friendly deal.

“It’s hard to imagine a more perfect example of why the TPP should never become law,” said Fight for the Future Campaign Director Evan Greer in a statement Friday. “Decisions that affect billions of people should never be made in secret.”

The petition calls for an investigation into the bribery allegations aimed at figuring out whether the secret dealings had an impact on the TPP and calls on world leaders to uphold democratic standards by refusing to sign the tainted deal.

“Signing the TPP while there are serious allegations of corruption concerning one of its top negotiators would be reckless and anti-democratic. Do not sign the TPP,” reads the petition. “We demand a full investigation into these bribery charges and a review of all officials involved in TPP negotiations.”

The TPP has been widely condemned for privileging corporate profits over international public interests. The secrecy around the deal and the negotiating process, which gave access to large corporations but largely locked out civil society, has been criticized as an international assault on democracy.

According to Fight for the Future, which has actively campaigned against the TPP, the secretive process made TPP negotiations ripe for corruption.

“Shutting journalists, experts, and the public out of the drafting of these agreements literally guarantees that there will be corruption, and the final text speaks for itself, reading like a wishlist for politically powerful and incumbent corporations,” Greer argued in a statement.

The TPP has been criticized for exacerbating the worst impacts of trade liberalization under existing agreements by further eliminating barriers to trade and strengthening global corporate power. In doing do, the TPP is also set to lock in a future dominated by dirty energy and carbon emissions and doom the planet to global warming.

The full draft text of the TPP was released last November, confirming campaigners’ fears about the threats posed by the massive trade deal. World leader are expected to sign the deal on Feb. 4.

Fight for the Future plans to deliver the petition and signatures to President Obama before the Feb. 4 deadline in a final push to pressure him not to sign the deal.