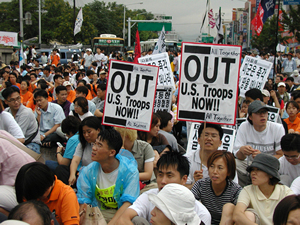 Broadly focusing on the militarization of the Trans-Pacific Partnership, “the Cooperation and Capacity Building” chapter of the “it’s worse that we thought” released text, should provide context to just how threatening this Pacific partnership is to the region.

Cooperation means discussion and consensus, but for the U.S.—perhaps as far back as the 1948 Economic Cooperation Act, but certainly the 1989 Washington Consensus, cooperation and capacity building has taken on an entirely different meaning, one that I think President Bush summarized so eloquently when he said, “If you are not with us, you are against us.”

The TPP is not a partnership. There is no “cooperation,” and the kind of activities that is meant by economic cooperation and capacity building is nothing more than using the kind of “resources and technical information” that partner countries have or can provide to bully forward the kind of neoliberal global corporate governance that much of the world is trying to move away from.

What the conclusion of the TPP has done is draft an “if you are not with us, you are against us” road map, and although the TPP is not a declaration of war, this is an agreement that if ratified, seeks to lay out the clear priorities and processes that broadly defines a national strategy (pdf) for implementing military cooperation within the Asia-Pacific.

It has long been a priority for Washington to advance a maritime policy for economic and security reasons and earlier this year the U.S. Department of Defense has introduced its Maritime Strategy for the region:

“Maritime Asia is a vital thruway for global commerce, and it will be a critical part of the region’s expected economic growth. The United States wants to ensure the Asia-Pacific region’s continued economic progress. The importance of Asia-Pacific sea lanes for global trade cannot be overstated. Eight of the world’s 10 busiest container ports are in the Asia-Pacific region, and almost 30 percent of the world’s maritime trade transits the South China Sea annually, including approximately $1.2 trillion in ship-borne trade bound for the United States. Approximately two-thirds of the world’s oil shipments transit through the Indian Ocean to the Pacific, and in 2014, more than 15 million barrels of oil passed through the Malacca Strait per day.”

The language in the Cooperation and Capacity Building chapter is deliberately vague, but read alongside DOD Operational Directives like the Defense Security Cooperation, it’s very clear that the ongoing provocation by Defense Secretary Ashton Carter in the disputed islands in the South China Seas is effectuating Trans-Pacific partners to provoke, obstruct, and contain China.

Like clockwork, once the TPP negotiations concluded, the U.S. entered within 12-nautical miles of China’s territorial claim of the Subi Reef in the Spratly Islands. That’s why when Defense Secretary Carter said that the TPP was worth as much to him as a new aircraft carrier, you didn’t need a crystal ball to understand that the South China Seas was the “crown jewel” of Obama’s trade and military rebalance. 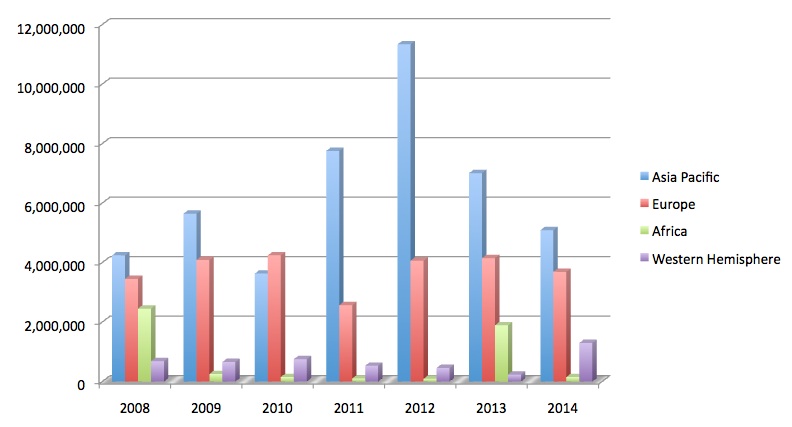 2008-2014 Arms sales by region (except Near East/South Asia, which often doubles the combined budget). Asia-Pacific in blue.

I would argue that the South China Seas has been an organizing tool for the TPP. It was only in 2009, when Obama announced joining the TPP that Malaysia, Vietnam, Brunei (TPP countries), and the Philippines and Indonesia (both having Trade and Investment Framework Agreements and Mutual Defense Agreements with the U.S.) concertedly began to assert territorial definitions in the South China Seas through a multilateral approach. There was already a bilateral agreement that was signed in 2002 called the Declaration on the Conduct of Parties in the South China Seas, signed between China and ASEAN, but perhaps it wasn’t the “Gold Standard” that Obama sought. Complicating the issue, the UN Convention on the Law of the Sea recognizes both multilateral and bilateral approaches to resolving the territorial dispute, despite Washington’s continued push for a multilateral solution as the only option.

Also I think it’s important to understand the DOD already maintains about 400 military installations (pdf) in the region. China, with their artificial island outposts have four. Additionally, Obama has– without any serious disputes from Pacific Island governments or other countries– recently annexed about 1.3 million square kilometers of Pacific Ocean territory through the Pacific Remote Islands Marine National Monument Act (PRIMNM) co-managed by the Department of the Interior and the Department of Defense.

Without coloring judgement, much of the territorial debate around the South China Seas is being undercut with misinformation coming from Western sources, and it’s important that we get some historical accuracy.

The nine-dash line was once an 11-dash line (pdf) that was drawn and supported by the U.S.-backed Kuomintang while fighting the Japanese occupation of China which ended during WWII (more maps here). When the 11-dash line was drawn, there was no disagreement or controversy by either the U.S., the U.K., or the Soviet Union, or any of the United Nations members when it was formed. For the U.S., the expectation had been that Chiang Kai-Shek’s Nationalist party would succeed but it was not until just after “Title IV” of the 1948 Economic Cooperation Act was signed that US support for Chiang Kai-Shek’s leadership began to flounder and the U.S. shifted military resources to Korea.

As much as the media tries to say that the U.S. is not provoking China, how is it not provocative interference when the Brookings Institute writes: “The U.S. government should make clear to the other claimants, and to other ASEAN countries like Singapore and Thailand, that we expect them to be public in their rejection of the nine-dash line under international law.”

Last week, when Defense Secretary Carter provoked China by sailing the USS Lassen through the disputed Spratly Islands, Malaysian Defense Minister Hishammuddin Hussein rightfully said, “I don’t welcome anything that can disrupt the stability of the region,”. “This is our region. We cannot allow other parties to determine our future.” The Malaysian Defense Minister also clarified that the South China Sea issue itself was not under the purview of the defense ministry and would be discussed by ASEAN foreign ministers during the 27th ASEAN Summit to be held in a couple weeks.

Geographically speaking, it’s also not coincidence that the four ASEAN countries that have a stake in the South China Seas dispute against China are also TPP countries. Looking at the non-OECD (pre 2009), countries in the TPP (Brunei, Chile, Malaysia, Peru, Singapore, Vietnam), what they all have in common is that they all strategically impede China’s access to Africa, the Mid-East and Latin America. Maritime access among the BRICS (Brazil, Russia, India, China, South Africa) partners and their regional trade alignments are geographically blocked by this partnership and the “Cooperation and Capacity Building” of integrated TPP militaries, headed by both Pacific Command in Hawaii and Western Pacific Logistic Command (COMLOGWESTPAC) in Singapore can create a series of log jams for non-TPP flagged container ships, and the not so favoured-nation countries like China.

As a result of BRICS, I’m probably more optimistic in stating that these “its-worse-than-we-thought” TPP rules will not win over the global multilateral agreements that will become mainframed in international agreements like the Convention on Climate Change or the Sustainable Development Goals. Given the opportunity to develop accordingly, the new BRICS institutions can provide for Civil Society Organizations to advance Climate-based and Development Goals. Additionally, the “Belt and Road”, or new Silk Road/Maritime Silk Road, will help global campaigners steer the world away from the 1%’s agenda of Global Corporate Governance.

While it may be wise to reserve a dose of cynicism when it comes to the BRICS alignment, we should be careful to not let misinformation campaigns cloud the equitable rebalancing of the global economy. BRICS, after all, has been established as a multipolar institution made up primarily of developing countries and emerging economies no longer content to be subjugated by the old colonial ambitions of leveraging debt against commodity resources. The organization of this alignment can be found in the BRICS Fortaleza Declaration that was signed in 2014, followed by the Ufa Declaration signed earlier this year focusing on trade and investment.

Following speculation bubbles and economic crashes that have thrown countries like Greece and Argentina into turmoil, the BRICS model offers a development model that is not based on excessive debt and speculation. What BRICS provides is not a Wall St. investment driven secret society for Global Corporate Governance, it is a partnership built off the principles of trade and development that is in line with the needs of developing countries.

Regardless of what one thinks about China’s claim in the South China Seas, we should not underestimate that Washington’s strategy for undermining this claim is enmeshed in obstructing the BRICS agenda. Simply put, the U.S. does not want to conform to a multilaterally-led trade alignment like BRICS, and will pull at nothing to advance a maritime policy seeking to embed itself as a unipolar power in the Asia-Pacific.