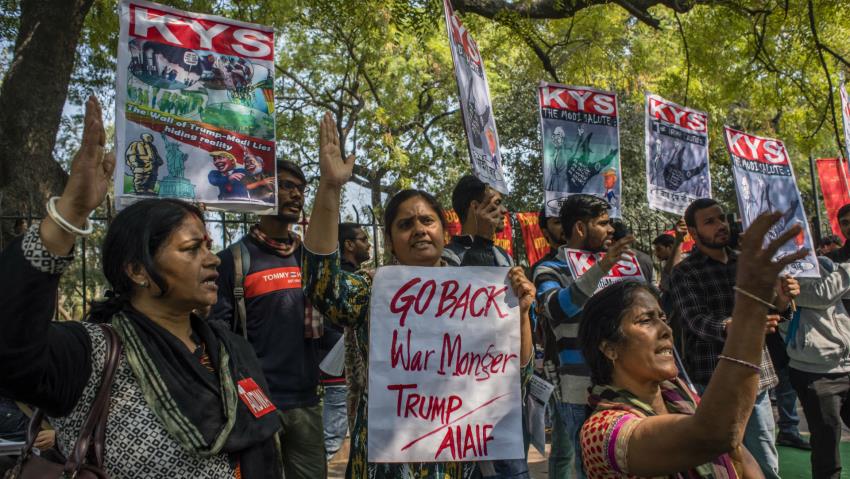 The US Government is taking loans from the market to meet this increasing deficit. It is issuing bonds known as Treasury Bills or T-Bills for this purpose. These T-Bills are being purchased by the Chinese and Japanese Governments in large quantities. This is leading to increased demand for US Dollar (USD) in the global money market because the Chinese have to buy dollars to buy the T-Bills. This increased demand is leading to a rise in the value of the US Dollar.

PRESIDENT Trump wanted India to open her market to imports of chicken, cheese and other products so that the trade deficit between the United States (US) and India could be reduced. However, India is not ready to do this since these agricultural imports will adversely affect the incomes of her farmers. This stand-off is preventing the making of a trade agreement during his present visit. However, both countries continue to work towards a larger free trade agreement (FTA) covering large numbers of imports and exports items.

Thus, the issue of trade remains alive. We must understand the compulsions before Trump. The present high incomes of the US are based on the technological developments that were undertaken by the US in the past. The US had been in the forefront of inventions such as nuclear reactors, jet airplanes, computers and the internet. The US had sold these hi-tech products at high prices, earned huge incomes and paid high salaries and provided welfare benefits such as unemployment compensation to its citizens with this income. However, there has been a lack of such technological innovations in the last two decades. As a result the US economy is under pressure. Salaries of US citizens are declining and the tax collections by the US Government are not increasing.

However, the US continues to provide unemployment benefits to its citizens. It also continues to try to run the world as per its wishes leading to military expenditures in wars like those in Afghanistan and Iran. The expenditures of the US Government are increasing while income is declining. The Budget Deficit of the US Government is, therefore, increasing. The US Government is taking loans from the market to meet this increasing deficit. It is issuing bonds known as Treasury Bills or T-Bills for this purpose. These T-Bills are being purchased by the Chinese and Japanese Governments in large quantities. This is leading to increased demand for US Dollar (USD) in the global money market because the Chinese have to buy dollars to buy the T-Bills.

This increased demand is leading to a rise in the value of the US Dollar. The demand for US Dollars increases by USD 100 if the Chinese Government buys T-Bills of USD 100. The value of the US Dollar has been maintained at artificially high levels by such inflow of foreign loans since the last two decades. The US is enjoying artificial glory with these borrowings. This is like buying a luxury car with borrowed money but not having an income to repay the loan.

The same Indian consumer would have got only 5 apples for the same Rs. 75 if the price of dollar was Rs. 15. Indian consumers are not buying Washington apples because the price of the dollar is high. The high value of the dollar, therefore, leads to high imports into- and low exports from the US. The combined effect of these is high trade deficit of the US. This is keeping Trump worried. He started a trade war with China and imposed import duties on Indian steel to reduce this deficit. He thought that making the imports from these countries expensive will lead to a reduction of the US trade deficit. However, the US trade deficit cannot be reduced by imposition of high import taxes on select items from selected countries.

Say, the income of a household is less. The household is borrowing money to make its ends meet. The homemaker complains that the shopkeeper has charged exorbitant price for the cloth. But this will not solve the deficit of the family. The borrowed money will now be spent in buying chocolates instead of cloth. The deficit will remain even if the shopkeeper reduces the price of cloth because the borrowing continues. Similarly, the US trade deficit will remain intact even if steel imports from India are less because the borrowing by the US Government continues. The borrowed money will now be spent in buying carpets instead of steel.

President Trump wants India to import more from the US. The US trade deficit will not reduce even if India allows imports of US chicken and processed cheese. The imports will only get transferred to another item and another country such as coffee from Vietnam. It is clear that Trump does not aim to solve the problem of high trade deficit or the artificially high levels of income of the US citizens. His aim is only to obtain domestic political advantage by showcasing to the US voter that he has secured favourable trade with China and India; though actually nothing will change.

We have to determine our way forward in this situation. Trump is focused on opening Indian markets for the imports of US agricultural products. We have to decide what we will ask in return from the US. We can seek reduction of import duties on our steel exports, or loosening of technology transfers, or opening of the US economy for our e-platforms such as Flipkart and Rupay. We have to decide which areas we will sacrifice and which areas we will win. I reckon that the share of agriculture in India’s economy will decline and share of services sector will increase according to global trends.

Thus, we may sacrifice our sunset agriculture sector and seek entry in the US market for our sunrise services sector. Trump will be happy to make such a FTA because he will be able to show to his voters that he has secured favourable terms for exports of chicken and cheese. The increased exports of services will not draw the anger of the US voters because it is subtle, indirect and hidden. We must bear the harm to our farmers because that has to happen anyway. We must focus on pushing the exports of our services and conquer the US.