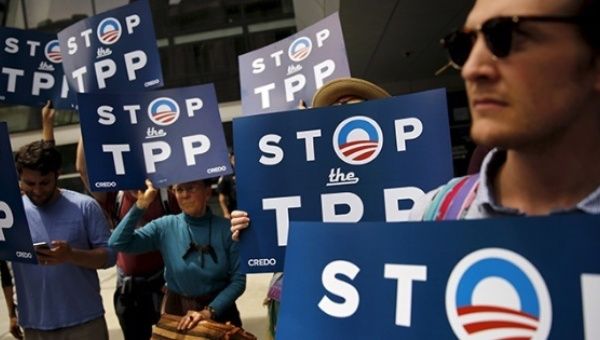 Trump, in another apparent reversal, says trans-pacific trade pact has ‘too many contingencies’

After publicly flirting last week with having the United States rejoin the Trans-Pacific Partnership, President Trump appeared to rebuff the idea once and for all late Tuesday.

In a Twitter post at 10:49 p.m., Mr. Trump said that although Japan and South Korea would like the United States to join the 11 other nations in the multilateral trade agreement, he had no intention of doing so. The decision put an apparent end to a meandering trade policy in which Mr. Trump pulled out of the deal in his first week in office, before suggesting last week that he was having second thoughts.

“Too many contingencies and no way to get out if it doesn’t work,” Mr. Trump wrote from his Mar-a-Lago club in Florida. “Bilateral deals are far more efficient, profitable and better for OUR workers.”

The comments confounded some trade experts on Tuesday night because South Korea is not in the Trans-Pacific Partnership.

Mr. Trump followed up with a shot at the World Trade Organization, which he said was “bad” to the United States.

The declaration comes as Mr. Trump has been in discussions with South Korea about peace talks with North Korea and as the president hosts Prime Minister Shinzo Abe of Japan at Mar-a-Lago, where they are expected to discuss trade, among other issues.

When Mr. Trump withdrew from the Trans-Pacific Partnership last year, he proposed a bilateral trade deal with Japan in its place. But Japan’s deputy prime minister, Taro Aso, ruled out that possibility in March, saying that such a negotiation would lead to unnecessary pain for Japan.

Instead, Japan forged ahead with a deal among the accord’s 11 remaining members, which they reached last month. Japan maintains that this agreement is still fragile, and that negotiating another pact with the United States could put its success at risk.

Japan has said it would be willing to enter a one-on-one deal only if it would serve as a bridge to the United States’ re-entering the Trans-Pacific Partnership.

Other countries have also been cool to the idea of giving any ground to the United States after they spent months reworking the deal after Mr. Trump withdrew.

Get what you need to know to start your day in the United States, Canada and the Americas, delivered to your inbox.

But the stem-winding deliberations about the pact have added another dose of confusion to Mr. Trump’s trade policy as anxiety grows that the Trump administration is on the verge of starting a global trade war.

In recent weeks, Mr. Trump unveiled sweeping tariffs on global imports of steel and aluminum, only to announce generous exceptions for several American allies. He also announced stiff tariffs on up to $150 billion worth of Chinese imports, before his economic advisers suggested that this might have been a negotiating tactic.

After striking a new bilateral trade agreement with South Korea last month, Mr. Trump suggested that he might hold out for a better deal down the road.

And Mr. Trump regularly muses about ending the North American Free Trade Agreement, even as his advisers say publicly that negotiations with Canada and Mexico are proceeding in a positive direction.

The mixed signals have put the president’s economic advisers in an awkward position and raised the hopes of many Republicans in Congress who have been optimistic that he would seek ways to ease trade tensions. Farmers and business groups have been fearful that retaliation from other countries on trade will stall the recent strength in the economy.

“This whole trade thing has exploded,” Larry Kudlow, the director of the White House’s National Economic Council, said last week, explaining that he was pulling together a team to begin renegotiating the Trans-Pacific Partnership.

While rejoining the pact would please some Republicans, it would have been a significant breach of a campaign promise and an embrace of a policy that the president has described as a “rape of our country.” For that reason, many of Mr. Trump’s closest aides have been quietly playing down the prospects of re-entry.

On Tuesday morning, Treasury Secretary Steven Mnuchin said that Mr. Trump made a “big announcement” this year when he said he would consider rejoining the trade pact. However, he cautioned that the United States would only do so if it could cut a much better deal.

Asked on CNBC about the chances of the United States rejoining the pact, Mr. Mnuchin demurred.

“I’m not going to handicap it,” he said.