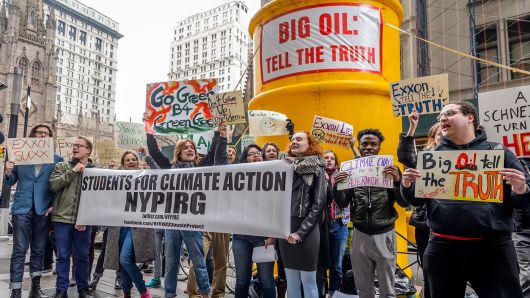 The NAFTA deal between the U.S. and Mexico would encourage further outsourcing of pollution and jobs, offer special handouts to notorious corporate polluters, lock in fossil fuel dependency, and extend Trump’s polluting legacy for years after he has left office. It not only fails to mention climate change – it would prolong NAFTA’s contribution to the climate crisis. Despite progress on a few fronts, the deal fails to adequately protect wildlife, clean air and water, or the health of communities that NAFTA has exposed to toxic pollution.

An environmental audit of the deal’s text reveals that it:

● Supports further outsourcing of toxic pollution and jobs: The deal’s lack of binding environmental standards would allow more corporations to evade U.S. environmental policies by shifting jobs and toxic pollution to Mexico, where environmental policies are weaker. For example, the lack of any binding lead pollution standards means that corporations would still enjoy NAFTA’s incentives to dump their lead waste in Mexico, which has contributed to job loss in the U.S. and toxic lead poisoning in border communities. ● Denies climate change: The deal fails to even mention climate change. This denialism leaves intact NAFTA’s incentives for corporations to dodge the hard-fought clean energy policies of U.S. states by moving to Mexico, eliminating jobs and perpetuating climate pollution. This climate loophole only reinforces the U.S.’s status as the world’s largest outsourcer of climate pollution. ● Rolls back the environmental standards of past trade deals: The deal takes a significant step backwards from the environmental protections included in the last four U.S. trade deals by failing to reinforce a standard set of seven Multilateral Environmental Agreements (MEAs) that protect everything from wetlands to sea turtles. The deal includes standard enforcement language for only one of the seven MEAs, while using weak language for two MEAs and failing to even mention four of these essential environmental agreements. ● Includes weak environmental terms: The environment chapter is primarily filled with non-binding terms that mirror the weak words of the polluter-friendly Trans-Pacific Partnership. For example, the text “recognizes that air pollution is a serious threat to public health,” but then fails to include a single binding rule to reduce the air pollution that NAFTA has exacerbated. Much of the language appears designed to greenwash the deal, not to rectify NAFTA’s threats to wildlife, ecosystems, or clean air and water. ● Copies a failed enforcement system: Even the strongest language will only be effective if enforced. The deal essentially replicates the same failed environmental enforcement mechanism from past U.S. trade agreements. Not once has the U.S. used this mechanism in past trade deals to bring a case against a U.S. trade partner for environmental abuses, despite widely documented violations. ● Offers a dangerous handout to Chevron and ExxonMobil: The deal makes progress in curtailing the overreaching corporate rights in NAFTA’s “investor-state dispute settlement” (ISDS) system...but then uniquely offers those egregious rights to notorious corporate polluters. This special handout is available to all U.S. oil and gas corporations that have, or may at some point have, government contracts for offshore drilling, fracking, oil and gas pipelines, refineries, or other polluting activities in Mexico. That means, for example, that Chevron and ExxonMobil – the two largest corporate climate polluters in history and repeat users of ISDS – would be allowed to challenge environmental protections in Mexico by relying on the same broad corporate rights that they have used to successfully challenge public interest policies from Ecuador to Canada. ● Encourages fracking: The deal preserves a NAFTA rule that effectively bars the U.S. government from determining whether gas exports to Mexico are in the public interest. This automatic gas export guarantee facilitates increased fracking in the U.S., expansion of cross-border gas pipelines, and growing dependency on climate-polluting gas in Mexico. ● Offers corporate polluters a new way to weaken environmental policies: The deal’s “good regulatory practices” rules could give corporate polluters a new way to delay, weaken, or halt new environmental regulations. The rules offer corporations extra opportunities to challenge proposed regulations before they are finalized, and to ask that existing regulations be repealed. These deregulatory rules could make it harder to reverse the Trump administration’s environmental