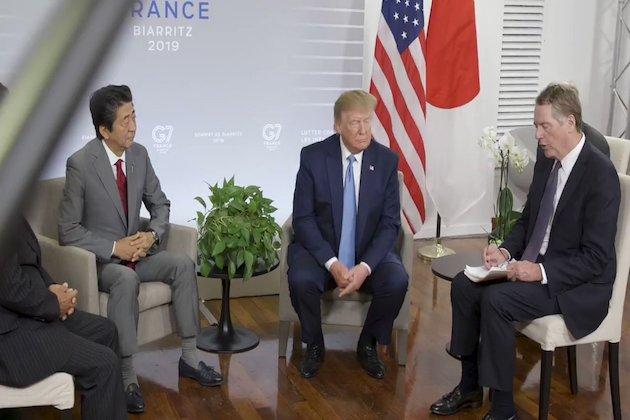 Trump says US and Japan have reached initial trade agreement

By Ana Swanson and Ben Dooley

WASHINGTON — President Trump said on Monday that his administration had reached an initial trade agreement with Japan and would announce a deal in the coming weeks.

The trade pact, while limited, is expected to increase access for American agricultural products like beef and chicken to the Japanese market. That would provide some relief to farmers who have been hurt by Mr. Trump’s trade war with China.

Exact details of the deal have not been released. But people briefed on the negotiations said the pact would lower Japanese tariffs on beef and other American farm products in return for cutting American tariffs on industrial goods like machinery. Unlike most trade deals, the pact is expected to be limited to a few industries.

It is not clear how much protection the deal would offer Japan against Mr. Trump’s threats to place tariffs on its cars, a penalty Japan is eager to avoid. And the deal also appeared unlikely to exempt Japan from Mr. Trump’s 25 percent tariff on steel, according to people familiar with the discussions.

In a letter notifying Congress of its plans Monday, the administration said it would enter into a trade agreement with Japan regarding tariffs, as well an agreement on the rules governing digital trade.

Mr. Trump teased a breakthrough in trade talks with Japan during the Group of 7 meeting in France last month, saying that the two countries were “very close” to a major deal.

“We’re working on a very big deal with Japan, and we’re very close to getting it,” he told reporters after he met with Prime Minister Shinzo Abe of Japan. “It will be one of the biggest deals we’ve ever made with Japan.”

Mr. Abe said the two sides had successfully “reached consensus with regard to the core elements related to agricultural and industrial trade,” but noted that the precise language of the pact was still under discussion.

Speaking to reporters at the event, the United States trade representative, Robert Lighthizer, said the deal would open up $7 billion of new access to Japanese markets. Editors’ Picks Inside the Minds of the Women Who Joined ISIS What Samantha Power Learned on the Job It’s a New Morning for Jennifer Aniston

The administration has been racing to conclude the deal before Mr. Trump travels to New York next week, where he will meet again with Mr. Abe at the United Nations General Assembly.

A deal with Japan would give Mr. Trump a big talking point as he heads into his re-election campaign. Within days of assuming the presidency, Mr. Trump pulled the United States out of a multilateral trade deal — the Trans-Pacific Partnership — that would have given America greater access to Japan’s market and lower tariffs, along with the markets of countries like Australia, Singapore and Vietnam. The pact was welcomed by farmers but disliked by many Republicans and Democrats, and Mr. Trump said he would use America’s leverage to cement a better trade deal with Japan.

Since Mr. Trump pulled the United States out of the T.P.P., Japan and the pact’s 10 other remaining members have proceeded with ratifying the deal, and Japan has entered into a major trade agreement with the European Union.

While Japan initially resisted a bilateral trade deal with the United States and instead insisted that it rejoin the T.P.P., Mr. Abe ultimately agreed to one-on-one trade talks.

The Trump administration’s deal is likely to address a much narrower range of issues than the T.P.P. would have. American and Japanese officials have been eager to announce an “early harvest” deal that would buoy their partnership, as well as Mr. Trump’s chances at re-election, and then continue on to further negotiations on other industries.

The agreements on agriculture are unlikely to go beyond those Japan would have given to the United States under the terms of the T.P.P. Tokyo agreed to lower tariffs on a wide range of agricultural goods, including those from the United States, when it joined the T.P.P., and it has consistently said it would not offer the United States terms better than those enjoyed by the group’s member countries.

The new deal will not touch on many other areas of trade addressed in that agreement. Instead, negotiators envision tackling issues such as pharmaceuticals, energy and services in future talks.

“We have other issues that we’re concerned about and we’d like to see addressed,” said Christopher LaFleur, the chairman of the American Chamber of Commerce in Japan. The current deal is “fine for the moment, fine in terms of seeing some early results,” he said, adding, “We very much hope though that the negotiators will stick with it.”

At the G7 in France, Mr. Trump also said Mr. Abe had agreed to buy hundreds of million dollars of surplus corn that would have been sold to China, but has instead piled up in American silos as a result of the trade war with Beijing.

In Japan, ranchers and farmers have greeted the announcement with puzzlement. The country is already a major buyer of American feed corn and has sufficient stocks of the grain.

“Even if we import it, there’s no path for using it,” said Akio Shibata of Japan’s National Resource Research Institute.

For Mr. Abe, the deal is a sort of quid quo pro, according to a person familiar with the leader’s thinking, who asked for anonymity to discuss the sensitive issue. In the spring, Mr. Trump agreed to delay trade negotiations with Japan while Mr. Abe campaigned for a critical parliamentary election in July. The announcement on corn, the person said, was seen as returning the favor by giving Mr. Trump a political lift among voters in farm states, such as Iowa.

“If Mr. Trump doesn’t have farmers’ votes, he can’t win,” said Kazuhito Yamashita, an expert on trade at Japan’s Canon Institute for Global Studies. “That’s why they made this agreement.”