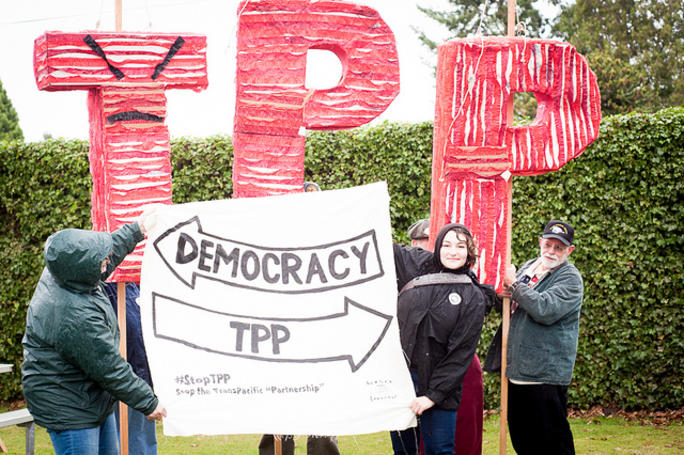 The move would mark a stunning reversal for Trump, who sharply criticized the pact as a “disaster” and made opposition to global trade deals a centerpiece of his economic agenda as a candidate.

The Obama administration had signed the trade agreement, known as TPP, with 11 other countries, including Japan, Vietnam, Singapore and Australia, to lower tariffs and counter China’s influence in the Pacific. An embrace of the TPP would give Trump more leverage in his escalating trade feud with Beijing. It also would give U.S. farms, retailers and other businesses better access to foreign markets if China makes good on its recent threats of new tariffs on U.S. goods.

Thursday’s order comes as Trump pushes forward on a chaotic revamp of the United States’ approach to global trade, seemingly veering from trade wars one day to multinational pacts the next. He has gone from assailing Canada and Mexico to saying he’s within striking distance of renegotiating the North American Free Trade Agreement. He has both pilloried China and praised its leader, Xi Jinping.

But no reversal has been more extreme than his new flirtation with the TPP. His comments were so unexpected that White House officials, lawmakers, business groups and others weren’t sure whether Trump had made a calculated overture or if it was another whimsical idea that he would cool on soon.

Reentering the TPP would not be easy. The 11 other countries reached their own trade deal this year, and it is unclear what conditions they would set before they restarted the entire process with the United States. The deal would be much stronger with U.S. participation, since it is the world’s largest economy. But several countries in the deal have cast a wary eye toward Trump’s swings on trade.

Canada and Mexico are part of the TPP talks, for example, and Trump has blasted leaders from both countries for what he describes as ripping off U.S. workers. Japan is also part of the TPP, and Trump has so far refused to exempt Japan from new tariffs on steel and aluminum imports into the United States.

Trump then told Lighthizer and Kudlow to “take a look at getting us back into that agreement, on our terms, of course,” said Sen. John Thune (R-S.D.). “He was very, I would say, bullish about that.”

“We should be leading TPP,” Sasse said. “China is a bunch of cheaters and the best way to push back on their cheating would be to be leading all these other rule-of-law nations in the Pacific that would rather be aligned with the U.S. than with China.”

But some free-trade supporters viewed Trump’s remarks with skepticism.

“If it holds until this afternoon, that’s a good move,” said Sen. Jeff Flake (R-Ariz.), a free-trade advocate and frequent Trump critic who was not at the White House meeting.

A senior administration official, speaking on the condition of anonymity to describe the White House’s internal approach, said Trump has not set any goals or deadlines for Kudlow and Lighthizer for when a new agreement should be reached.

Instead, the White House is approaching potential new talks as a way to signal that Trump is receptive to free-market proposals if he feels they can be reached in a way that advances U.S. interests, the official said.

Trump walked back a little on his proposal in a Twitter message late Thursday.

“Would only join TPP if the deal were substantially better than the deal offered to Pres. Obama,” he wrote. “We already have BILATERAL deals with six of the eleven nations in TPP, and are working to make a deal with the biggest of those nations, Japan, who has hit us hard on trade for years!”

Trump — and a number of Democrats and labor unions — had railed against the trade deal during the presidential campaign, saying such pacts allow foreign companies to lure away U.S. jobs and erode the U.S. manufacturing base. In June 2016, Trump called the TPP “another disaster done and pushed by special interests who want to rape our country.”

The president’s protectionist impulses since taking office have caused heartburn for many GOP lawmakers who continue to embrace the Republican Party’s traditional support for free trade. If the president does move forward with rejoining the TPP, business groups and many Republican lawmakers would be sure to applaud the move, even though it would be a striking example of Trump reversing a campaign-trail promise.

At least some labor groups were alarmed at Trump’s willingness to restart the TPP process.

“TPP was killed because it failed America’s workers and it should remain dead,” Richard Trumka, president of the AFL-CIO, tweeted Thursday. “There is no conceivable way to revive it without totally betraying working people.”

Trump administration officials are also working to renegotiate NAFTA, and the president told senators Thursday his team was making progress.

Engaging in talks to reenter the TPP would be part of a broader White House strategy to respond to an escalating trade flap between Trump and Beijing. But Trump has been having a hard time rallying other countries to backstop his push to impose new tariffs on Chinese goods.

The president is also running into strong pushback from Republican lawmakers, particularly those representing agricultural regions where China’s threatened retaliation against U.S. exports would hit hard.

The president first raised the prospect of reentering the trade deal at the World Economic Forum in late January. He said then that he would rethink his opposition if the United States secured “substantially better terms,” without offering specifics.

There has been no indication since then that the administration was making any genuine effort to rejoin the agreement.

“This is another encouraging signal from the administration, following what the president said at Davos,” said Wendy Cutler, who was among the TPP negotiators. “I always thought that with time the administration would value the TPP more and more.”

One question is which TPP Trump wants to rejoin: the original 12-nation deal that the Obama administration negotiated, or the 11-nation agreement that is moving toward implementation by the remaining countries.

When the president last year announced he was quitting the deal, the other TPP countries suspended 20 provisions in the original accord and announced a new deal, the Comprehensive and Progressive Agreement for Trans-Pacific Partnership (CPTPP). The provisions, including key intellectual property protections such as those involving biological drugs, were measures the United States had demanded in return for granting access to its market.

U.S. negotiating partners might expect the United States to “pay for” restoring those provisions at this point, Cutler said.

“They do want us back in. But the question is: At what price?” Cutler said.

Trump was not the only one to oppose the TPP during the 2016 presidential campaign. His Democratic rival, Hillary Clinton, came out against the deal as she faced pressure during her primary campaign against Sen. Bernie Sanders (I-Vt.), who was outspoken against the TPP. Clinton had played a role in its formation during her time as President Barack Obama’s secretary of state.

Even before Trump’s election, the Trans-Pacific Partnership began to founder and stall in Congress as it got caught up in political crosscurrents, losing support from some Republicans and progressive Democrats.

In May 2016, as domestic political backing for the TPP was starting to erode, Obama wrote an op-ed in The Washington Post aiming to rally support.

“Increasing trade in this area of the world would be a boon to American businesses and American workers, and it would give us a leg up on our economic competitors, including one we hear a lot about on the campaign trail these days: China,” he wrote.

The TPP is becoming one of the White House’s few remaining options as Trump searches for ways to exert pressure on China to back down from its threat of new tariffs on U.S. exports. U.S. farm groups have said they fear getting caught in the middle of the trade spat that Trump and Beijing have recently escalated, and they want assurances that they will not lose access to foreign markets.

The White House had been looking at using a Depression-era program known as the Commodity Credit Corp. that could be used to extend subsidies to farmers, but Republican lawmakers pushed back hard on that idea during Thursday’s meeting.

“Farmers don’t want a handout. They want access to markets,” Sen. Steve Daines (R-Mont.) said. “The president was surprised by that. He’s like, ‘really?’ He said, ‘Oh, really? Okay, so we won’t do that.’ ”