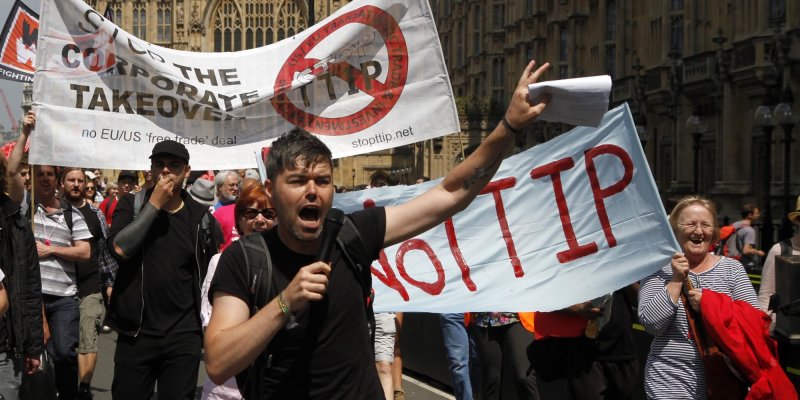 TTIP: Big business and US to have major say in EU trade deals, leak reveals

The European Commission will be obliged to consult with US authorities before adopting new legislative proposals following passage of a controversial series of trade negotiations being carried out mostly in secret.

A leaked document obtained by campaign group Corporate Europe Observatory (CEO) and the Independent from the ongoing EU-US Transatlantic Trade and Investment Partnership (TTIP) negotiations reveals the unelected Commission will have authority to decide in which areas there should be cooperation with the US – leaving EU member states and the European Parliament further sidelined.

The main objective of TTIP is to harmonise transatlantic rules in a range of areas – including food and consumer product safety, environmental protection, financial services and banking.

The leaked document concerns the “regulatory cooperation” chapter of the talks, which the European Union says will result in “cutting red tape for EU firms without cutting corners”. It shows a labyrinth of procedures that could tie up any EU proposals that go against US interests, according to analysis by CEO.

The campaign group said the document also reveals the extent to which major corporations and industry groups will be able to influence the development of regulatory cooperation by making what is referred to as a “substantial proposal” to the working agenda of the Commission and US agencies.

The plans revealed by the document will give the US regulatory authorities a “questionable role” in Brussels lawmaking and weaken the European Parliament, CEO argues.

Kenneth Haar, researcher for CEO, said: “EU and US determination to put big business at the heart of decision-making is a direct threat to democratic principles. This document shows how TTIP’s regulatory cooperation will facilitate big business influence – and US influence – on lawmaking before a proposal is even presented to parliaments.”

Nick Dearden, director of the Global Justice Now campaign group, said: “The leak absolutely confirms our fears about TTIP. It’s all about giving big business more power over a very wide range of laws and regulations. In fact, business lobbies are on record as saying they want to co-write laws with governments – this gets them a step closer. This isn’t an ‘add on’ or a small part of TTIP – it’s absolutely central.”

Mr Dearden said it was “scary” that the US could get the power to challenge and amend European regulations before elected European politicians have had the chance to debate them.

Referring to the imminent EU referendum, he said: “We’re talking about sovereignty at the moment in this country – it’s difficult to imagine a more serious threat to our sovereignty than this trade deal.”

CEO says greater regulatory cooperation between the EU and the US has already led to public health concerns – such as the EU failing to regulate hormone-disrupting chemicals and the recent Glyphosate relicensing controversy.

CEO claims that on both issues the Commission listened closely to US authorities and big business despite the health threats posed by these chemicals to EU citizens.

A spokesman for the European Commission said: “These accusations are unfounded and are not reflected in the EU proposal for simplifying rules for EU exporters. The text on regulatory cooperation will be published soon for everyone to see that this so-called analysis is completely false, presents a biased view of the European Commission’s work and ignores the reality of EU texts. Regulators – not trade negotiators – will continue to lead regulatory cooperation initiatives – both in the EU and the US.”

The Transatlantic Trade and Investment Partnership (TTIP) is a proposed trade agreement between the EU and the US, with the aim of promoting trade and multilateral economic growth.

The EU says that the aim of TTIP is to help people and businesses by opening up the US to firms in the bloc, helping cut red tape that firms face when exporting and setting new rules to make it easier and fairer to export, import and invest overseas.

Anti-TTIP campaigners say the deal will increase the power of multinationals at the expense of democracy and the general good.

One of the main issues around the negotiations is that so many of the talks have been carried out in secret, with media leaks the only way the public is being informed as to what is happening.

The European Commission says that the TTIP would boost the EU’s economy by €120bn, the US economy by €90bn and the rest of the world by €100bn. The trade deal is opposed by unions, charities, NGOs and environmentalists, particularly in Europe, with critics previously telling The Independent that negative impacts include “reducing the regulatory barriers to trade for big business, things like food safety law, environmental and banking regulations and the sovereign powers of individual nations,” or more critically as an “assault on European and US societies by transnational corporations”.

The European Commission says once a final text has been agreed it will be up to member state governments and MEPs to decide on the implementation of the deal.

So-called “regulatory cooperation” in the ongoing EU-US TTIP talks seeks to bring legislation on both sides of the Atlantic into line. This chapter of the negotiations means razing those “regulatory barriers” already in place and preventing new ones from emerging.

Lengthy procedures, including vetting by business for possible economic impacts, are thus envisaged for new regulations. Such measures have already been used informally to weaken EU ambition on financial sector supervision in the years leading up to the 2008 collapse, to offer a free pass to US companies on personal data protection, and to delay or water down EU proposals on animal testing and aviation emissions.

More recently, in the case of toxic hormone disrupting chemicals, we’ve seen the European Commission siding closely with US authorities and big business in refusing to take action to restrict the use of these substances despite the well-documented health threats posed to EU citizens.

Enshrining such procedures into legislation under TTIP will lead to intensified attacks on laws that protect public health, workers’ rights and environmental standards.

This leaked document from the negotiations confirms fears that the Commission will be obliged to consult with US authorities before adopting new legislative proposals while EU Member States and the European Parliament are sidelined. The leak also offers a glimpse at the proposed bureaucratic labyrinth of impact assessments, dialogues, consultations and reviews that could tie up any proposals that go against US business interests.

All in all, the extent to which big business will be able to influence regulations under these proposals is a serious threat to democracy as we know it.