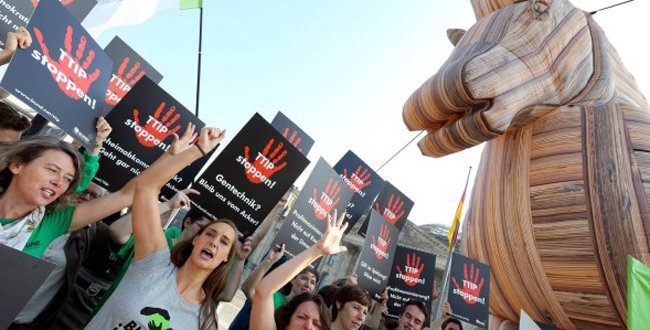 TTIP or the Disintegration of the EU

TTIP is negotiated behind closed door by those representing economic elites of Brussels and Washington. There is little information and the little that is leaked has infuriated different social and ecological organizations. Studies also warn of a financial debacle in the EU.

They negotiate, they discuss and they shake their powerful hands in secluded offices, shielded from all other citizens. They travel from Washington to Brussels and from Brussels to Washington trying to work out their alliance that is almost sealed through documents of countless pages and confidential texts that pass over Governments. The “men in black” of the economic elite have been chairing private meetings since 2013 where they agree their interests in silence, isolated from public debate, with the objective of creating the biggest free trade area in the world. Although they leak information, drip by drip, so as to lay claim to their so-called willingness to be transparent, for sure, little is known about the negotiations of the Transatlantic Trade and Investment Partnership between the United States and the European Union (known by the English acronym: TTIP). In fact so little is known, that it has raised suspicions and has infuriated different social and ecological organizations.

According to the organization Ecologists in Action and the platform “No to the TTIP”, the meetings were “formally” constituted by the European Commission and by the Obama administration. However, it assures that there are “big business lobbyists on both sides that put pressure and participate actively in these meetings.” The organization explains that the treaty model seeks to liberalize “all sectors” to achieve legislative harmonization through unifying laws on both sides of the Atlantic.

The objective of the agreement can be summed up in three key points according to the draft leaked in March 2014. The intention is to eliminate “all custom duties” and reduce non-custom barriers. At issue is a section that is ambiguous because its details have not been articulated and because it covers a number of financial, legal and economic laws and regulations etc. On the other hand, the objective is to cede to the companies involved rights to challenge laws and regulations of states if such norms hinder trade and their economic development. “A chapter that is particularly controversial is the one on investment protection. This provides that any international private investor can challenge any environmental, labor or social legislation that interferes with its profits before international tribunals.” Both organizations emphasize this.

For this reason, the Ecologists en Accion and the “No to the TTIP” consider that the agreement will mean reductions in labor rights and they will be justified by “cost reduction based on the anti-trade union policy of the US – that has not ratified ILO conventions – and on labor reforms imposed by the Troika”. They also highlight that the application of “the most profitable” legislation for big companies will affect various areas. In the first place, they decry that liberalization of sectors of the economy will provoke the privatization of public services. Regarding environmental policies and the right to health, they think that there will be a free path for the practice of “fracking” and that this will increase the sale of genetically modified food which to date have been prohibited in the European Union. Furthermore, intellectual property will also be impacted. It adds, “North American legislation is applied that facilitates cyber surveillance and access to personal data and penalizes file sharing on the internet; and furthermore, it will shield patents by reducing, for example, potential access to generic medicine.”

“Reform would lead to the economic disintegration of the EU.”

A study carried out by Tufts University (US) claims to demonstrate that the proposal would lead to the economic disintegration of the European Union. The preparation of the analysis was based on the United Nations Global Policy Model to assess the impact of the TTIP on a global economy undergoing prolonged austerity and low growth on both sides of the Atlantic. The report pointed out that if the treaty is implemented, the biggest impact would be on the economies of North Europe and that all EU states will suffer losses in terms of exploitation, Gross Domestic Product (GDP) and wages. So too would job and public benefits of different governments suffer.

Regarding the decrease in net exports, the analysis reveals that Nordic countries will face a debacle of a 2.7% GDP loss; France would follow (1.9%), then Germany (1.4%) and [finally] the United Kingdom (0.95%). On job losses, the study calculates that approximately 600,000 jobs will disappear: in Germany, 134, 000; in France 130,000 and in South European member states job losses would total 90,000. On the other hand, France would be the country the most affected, incurring wage losses totaling 5,500 euro per worker. Northern European countries follow (a reduction of 4,800 euros per worker). In third place is the United Kingdom (4,400 Euro loss per worker) and in fourth place is Germany (3,400 euro loss per worker).

The study also reports that the TTIP would lead to a loss of government income. Specifically, it warns that the surplus of indirect taxes over subsidies will decrease in all EU member states. France would again be the biggest loser (loss of 0.64% GDP). Therefore, according to the analysis, the agreement will provoke major financial instability and an accumulation of imbalances.