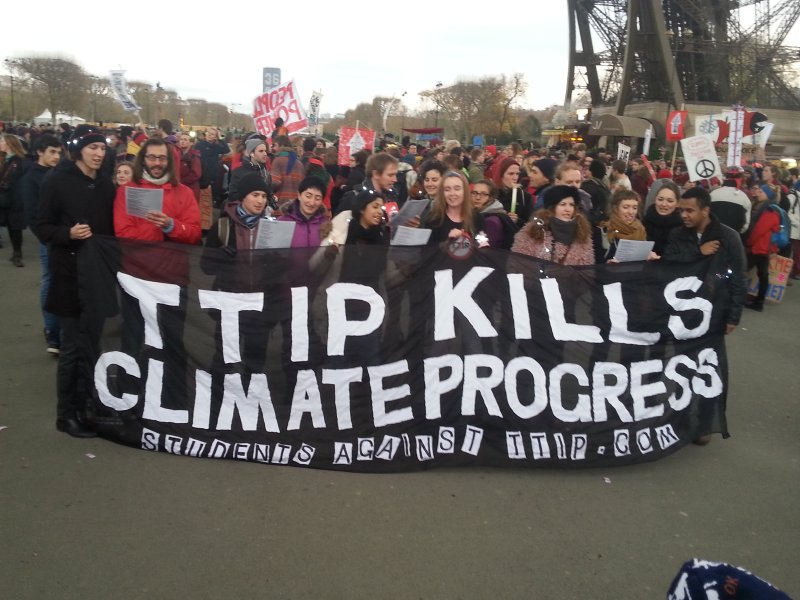 The controversial Transatlantic Trade and Investment Partnership (TTIP) being negotiated between the EU and USA will have negative effects on public health, jobs and the climate, according to the official impact assessment published today.

The 394-page report has taken two and a half years to complete, and provides a unique insight into the damaging social and environmental consequences of TTIP for the people of Europe and the USA.

John Hilary, Executive Director of War on Want, said : “The revelations in this new report hammer the final nails into the coffin of TTIP. The official assessment has shown the true extent of the threat that this dirty deal poses to our common futures, and it is not pretty. We call on the EU to stop the negotiations now to prevent these dangers from becoming a reality.”

The impact assessment warns that TTIP will lead to increased levels of diet-related diseases such as obesity and diabetes as a result of increased consumption of unhealthy foods such as soft drinks and processed foods that contain high degrees of salt and fat. TTIP also jeopardises attempts to curb the negative effects of alcohol and tobacco consumption in Europe, according to the report, as lower-cost US imports will lead to increased levels of cancer and stroke.

Using the most direct language, the impact assessment notes that TTIP risks undermining the human right to health in Europe, with the worst consequences reserved for the poorest and most vulnerable in society. It also states that TTIP is in direct conflict with the Sustainable Development Goals adopted by all countries at the United Nations just last year.

The impact assessment report calculates that TTIP will lead to the loss of at least one million jobs in the EU and USA combined, and more than two million if the ‘ambitious’ version of TTIP is achieved. The impact of these job losses will be highest among low-skilled workers, according to the report, who will also find it more difficult to secure alternative employment once they have lost their jobs.

European workers in the electrical machinery sector will be particularly hard hit, with as much as 7.5% of the entire workforce (over 100,000 jobs) set to go as a result of TTIP. The beleaguered European steel industry will also see job losses from TTIP, according to the report, adding to the problems faced by the sector as a result of previous market liberalisation.

Meat production in the EU is confirmed as another of the sectors that will face the most job losses from TTIP, as unfair competition from industrial-scale US agriculture drives European farmers out of business. Countries such as Ireland have been warned by the European Commission to expect severe shocks to their beef industry as a result of TTIP.

The impact assessment calculates that TTIP will lead to an increase of over 21 million tonnes in CO2 emissions in the EU and USA combined. This is despite the fact that the USA and EU already account for per capita CO2 emissions that are higher than the world average – over three times higher than the average, in the case of the USA. It also flies in the face of the commitments made by all countries in the Paris COP21 talks of December 2015.

The impact assessment further notes that TTIP will lead to an increase in air pollution across Europe, with rises expected in emissions of carbon monoxide, sulphur dioxide, nitrogen oxides and PM10 particulates – all known to pose threats to human health.

The full text of the TTIP sustainability impact assessment report is online here.