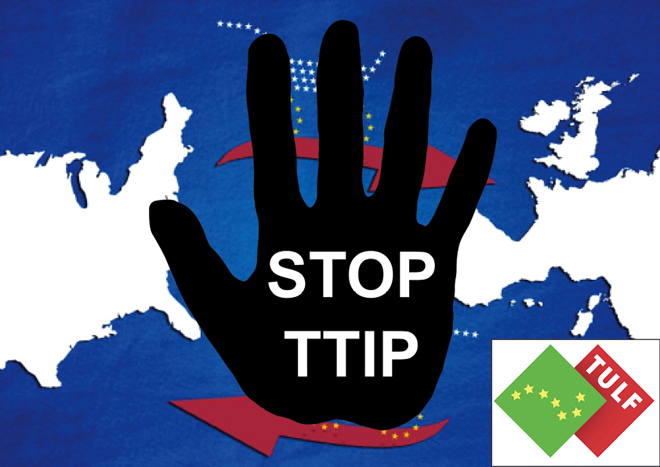 A TULF Fact Sheet on TTIP is available on this website. Below is a brief summary of the issues involved.

The TTIP are a set of negotiations between European capital and American capital (which willingly agree on most things) in response to the shift in growth from the north to the so-called BRIC countries (Brazil, Russia, India, and China). Real growth has stagnated for decades in both continents, giving rise to the dominance of financial speculation and a shadow banking system, and this is a further attempt to create growth at the expense of people and our environment.

It seeks to increase profitability for big business in the United States and Europe at the expense of workers and their rights, of the public and the services they rely upon, and of the environment and food safety. It is being carried out by unelected technocrats who held private meetings with big business in advance and, whether on the European side or American side of the negotiations, largely agree on what needs to happen.

It would further cement liberalisation and privatisation and open up new areas for private exploitation. It would greatly restrict “public good” clauses in public procurement contracts. It would confer new rights on corporations, allowing them to sue sovereign states for policies that negatively affect their profits, and to have their case heard in unaccountable courts.

It would do away with some of the modest financial reforms that were introduced in response to the economic crisis, creating more instability, risk and speculation in the economy, and would result in significant loss of jobs in EU countries.

It is vital that unions oppose these negotiations. It will be tempting to merely concentrate efforts on the most offensive ISDS part; but all areas that negatively affect workers, the public and democracy must equally be opposed.

These negotiations are being carried out in secret, with very little comment or analysis by the media. Therefore the trade union movement must start with a public awareness campaign both with members and with workers more generally.

If we wish to secure public services and to halt privatisation and outsourcing we must fight to prevent TTIP being agreed.

The TULF encourages workers to sign this petition, calling for such a campaign to be led by the ICTU.