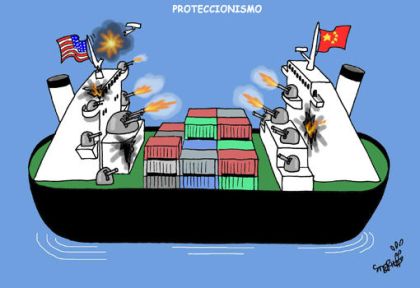 The Nelson Report’s Chris Nelson reports that Chinese officials were seen entering the offices of the U.S. Trade Representative in Washington, D.C. Wednesday evening at 10:30. Negotiations on the proposed bilateral investment treaty, BIT as it is commonly known, are continuing at an accelerated pace, with new rounds only two weeks apart.

U.S. officials, according to the World Trade Online site, want to make a “substantive announcement” with the Chinese at the Asia-Pacific Economic Cooperation forum less than two weeks from now in Lima.

Concluding a major deal with Beijing in a “feverish rush,” in the closing days of the Obama administration in Washington, does not look like it will be advantageous for U.S. businesses.

In the beginning of October, Treasury Secretary Jack Lew said the U.S. would not lower standards for the sake of reaching a deal. “It fundamentally has to be a high-quality agreement that offers access in both directions in a meaningful way if it’s going to come to closure,” he assured an audience at the Peterson Institute for International Economics.

Moreover, Lew made the case for continuing talks at this sensitive time. “We are,” he said, “making progress, but not there yet, and we obviously are looking at a calendar that gets shorter and shorter, so the time to really put a shoulder into it is now.”

Now, the Chinese either are trying to take advantage of a president seeking to bolster a legacy or are not really interested in concluding a deal, but in any event they are not budging.

“The late night USTR/Chinese meetings shows how serious the negotiations are, but to say a deal is ‘close’ is simply wrong,” says a cleared advisor to the Nelson Report, the influential Washington-insider newsletter. “The still outstanding issues to be resolved are the hard ones, and since the Chinese aren’t even compromising on some of the easier ones, how likely is it they are compromising on the tough ones!?”