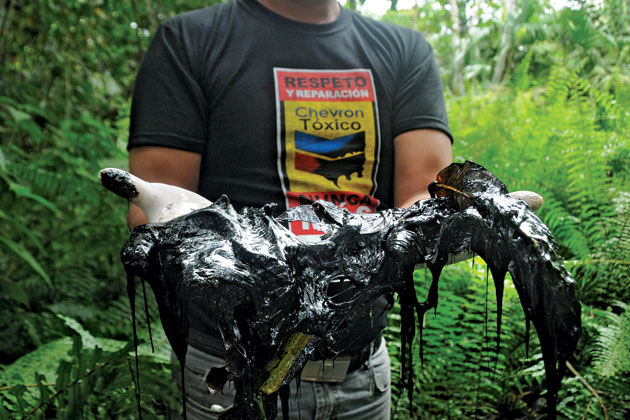 The U.S. Supreme Court on Monday let stand a $96 million international arbitration award issued in 2011 in favor of energy company Chevron Corp (CVX.N) in a dispute over the development of oil fields in Ecuador.

The justices declined to hear the South American country’s challenge to an August 2015 ruling by the U.S. Court of Appeals for the District of Columbia Circuit upholding the award in Chevron’s favor issued by The Hague’s Permanent Court of Arbitration in the Netherlands.

With interest, the arbitration award stands at approximately $106 million, Chevron said. Chevron spokesman Morgan Crinklaw said in a statement the company was pleased that the Supreme Court rejected the appeal and that Ecuador "will be held accountable."

The dispute stems from a 1973 deal that called for Texaco Petroleum Co, later acquired by Chevron, to develop oil fields in exchange for selling oil to Ecuador’s government at below-market rates. Texaco filed several lawsuits in the 1990s accusing Ecuador of violating the contract.

Chevron initiated an arbitration proceeding at The Hague in 2006, claiming Ecuador’s courts failed to resolve the lawsuits in a timely manner, violating a treaty between Ecuador and the United States. A panel awarded Chevron $96 million plus interest, which was subsequently upheld by the Dutch court system.

Chevron then filed a federal lawsuit in Washington, seeking a judgment confirming the panel’s decision in order to collect the award. After a federal judge affirmed the award in 2013, Ecuador appealed to the Court of Appeals for the District of Columbia Circuit.

Ecuador said the arbitration tribunal has no jurisdiction in the case because the bilateral trade agreement took effect five years after Texaco ended operations in Ecuador in 1992.

The case is not part of a separate legal battle brought by a group of Ecuadorean villagers who claim Texaco caused billions of dollars in pollution damage when it began exploring oil deposits in the 1960s.

Chevron continues to fight claims from the villagers, who have filed lawsuits in Canada, Brazil and Argentina seeking to enforce a $9 billion judgment rendered in Ecuador against Chevron.

In 2014, a U.S. judge in New York issued a scathing ruling finding that the villagers’ American lawyer, Steven Donziger, committed fraud in securing that judgment. Donziger, who denies any wrongdoing, has appealed.