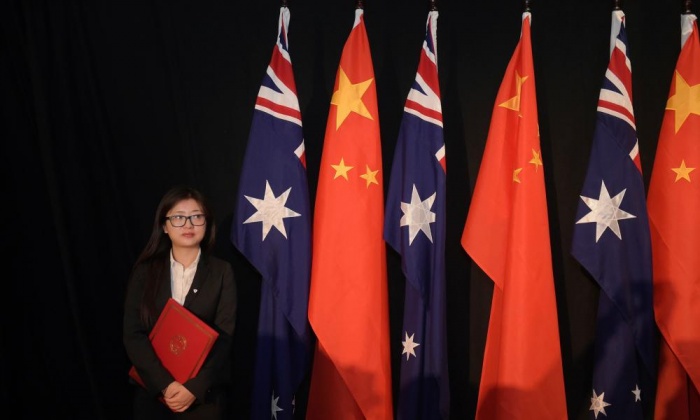 A woman holds a copy of the free trade agreement during a signing ceremony on Wednesday in Canberra. Photograph: Lukas Coch/pool/Getty Images

The manufacturing union is demanding the Labor party block the Abbott government’s free trade agreement with China, with its leader arguing the “deeply shameful” deal makes it too easy to bring foreign workers to Australia.

In a sign of the pressure that will be brought to bear on the opposition as it considers its stance on the just-released FTA, the Australian Manufacturing Workers’ Union warned Labor against making a pragmatic decision to offer its overall support.

The union movement’s concerns relate chiefly to provisions on the movement of Chinese workers to Australia. The deal commits Australia to allow Chinese workers who install and service machinery and equipment to enter the country and stay for up to three months.

The relevant chapter appears to suggest that labour market testing – forcing employers to prove Australians are not available to perform the work – is not needed as a condition for temporary entry.

Attached to the FTA is a memorandum of understanding to allow Chinese workers to be brought to Australia for infrastructure development projects worth $150m or more.

These “investment facilitation arrangements” are available for projects in the food, agribusiness, resources, energy, transport, telecommunications, power supply and generation, environment or tourism sectors – so long as they involve companies that are substantially owned by Chinese enterprises.

The document says there will be no requirement for labour market testing to enter into the umbrella arrangement but direct employers can then seek a labour agreement with the immigration department to sponsor temporary skilled workers.

This agreement can specify sponsorship obligations “including any requirement for labour market testing” – language that seems to leave the door open to imposing the rule at the department’s discretion.

The manufacturing union’s national president, Andrew Dettmer, urged Labor to stand against the deal when the parliament votes on any legislation required to implement the FTA commitments.

“Labor should not be at any time saying there’s some form of realpolitik to be applied here. This is not the case,” he told Guardian Australia.

“It would appear from our first reading of it ... that there is no capacity for us to influence the content of this agreement and it’s a deeply shameful event in Australian political history.”

“For a government that’s claiming to stop the boats, they don’t seem to have any problem importing foreign workers from China to be exploited.”

“With the threshold as low as $150m, Australian workers could find themselves locked out of jobs for all large-scale residential and commercial real estate developments, as well as other constructions projects in the infrastructure, tourism and resources sectors,” Hicks said.

The Australian Council of Trade Unions backed concerns that the deal would “make it much easier for employers to bring in Chinese workers without having to advertise jobs to local workers”.

Labor – which is preparing for the party’s national conference next month – has kept its options open when it comes to assessing the deal.

The full text of the agreement will first be subject to an inquiry by parliament’s joint standing committee on treaties. Parliament will then consider any amendments to legislation that is needed to implement the deal.

Labor’s Senate leader and trade spokeswoman, Penny Wong, said it was critical to strengthen the relationship with China but the party wanted to ensure it was a high-quality trade agreement that created Australian jobs.

“The impact of the agreement on the Australian labour market warrants particular attention,” she said. “Any provisions on labour mobility must enhance, not constrain, job opportunities for Australians.”

Labor has set out criteria for assessing the benefits of the deal, including market access outcomes for Australian farmers that were at least as good as the New Zealand FTA.

Labor says it would not support “provisions which give Chinese companies operating in Australia superior legal rights to those enjoyed by Australian companies” and also wants “retention of labour market testing or comparable safeguards on temporary migration”.

The Business Council of Australia’s president, Catherine Livingstone, said the agreement would unlock significant opportunities for two-way trade and “deliver lasting benefits for the whole community”.