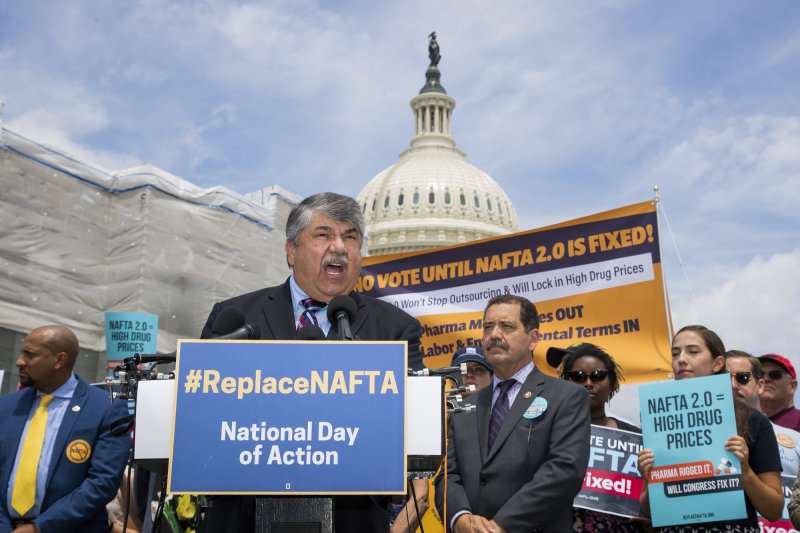 The head of the largest U.S. union confederation urged House Democrats to withhold support for the stalled U.S.-Mexico-Canada free trade agreement until the Trump administration makes more changes to the enforcement provisions.

The comments from AFL-CIO President Richard Trumka come as Democrats and the White House are nearing a deal on the USMCA and as President Donald Trump has intensified his public calls for lawmakers to pass it.

Trumka told a gathering of freshmen Democrats, which Speaker Nancy Pelosi participated in, that they need to stand firm to get the best USMCA deal possible.

“He said he has picked more pockets at the five-yard line when he negotiates, to get more for his members that he possibly can,” said Representative Jimmy Gomez of California.

Trump criticized Pelosi Tuesday for not yet putting USMCA up for a vote.

“I think the woman is grossly incompetent. All she has to do is put it up for a vote,” the president told reporters at a Cabinet meeting.

Some freshmen in swing districts in the meeting said they want to see a deal this year, according to lawmakers. They argue that Trump has been able to convince farmers that the damage due to his trade war with China is due to the USMCA being held up.

Trumka assured the anxious members in the group that he wants to do a deal, lawmakers who attended said.

“He said he is working to get to yes and will do everything he can to get there,” added Florida freshman Representative Donna Shalala, who said she wants to get the agreement enacted this year.

The key sticking point in the talks is a Democrat demand that Mexico make stronger commitments to enforce its labor laws and for strong punishments — including the banning of imports — if Mexico fails to meet them.

“Labor enforcement in my judgment is the last hurdle,” the top Democratic negotiator, Ways and Means Committee Chairman Richard Neal, told reporters Tuesday. “If we can get Richard Trumka to agree with the labor-enforcement mechanisms on the basis of this is better than what we have, I think that would go a longer way toward securing support on a cross-caucus basis.”

Neal said he believes the USMCA can be approved in 2019.

“It would help stabilize markets,” he said. “I don’t know how people can defend the current Nafta when we have these new mechanisms before us, which are a substantial improvement.”

The key role that Trumka is playing in the USMCA talks has led Republicans like Senator John Cornyn to suggest the AFL-CIO is taking charge of the talks.

“Nobody has veto authority with respect to the decisions of the House Democratic caucus led by Speaker Nancy Pelosi,” he said. “We are partners with the men and women of organized labor.”