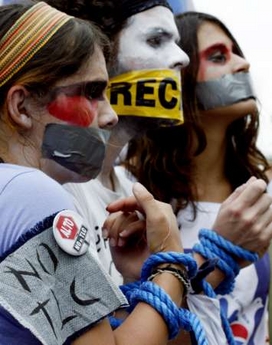 Some 800 members of the university community demonstrated yesterday against a resolution by the Supreme Elections Tribunal (TSE) that they say infringes upon university autonomy.

At issue was a July 12 resolution by the Tribunal that said university personnel, like other public officials, cannot use public resources to campaign for or against the Central American Free-Trade Agreement with the United States (CAFTA). 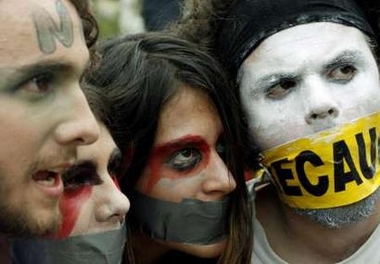 One group of protestors marched from UCR to the Tribunal downtown, and another rode in about 12 buses from UNA. Students, rectors and trade unionists gave speeches and demonstrated, and about 50 police officers stood guard near the building, which was cordoned off with yellow cord and tape.

Responding to widespread outrage from the university community, the Tribunal clarified its resolution last week in a statement. We “consider desirable and necessary that public universities of the country stimulate national debate (on CAFTA)” through such activities as classes, conferences, research and publications, the statement read. Prohibitions against using public resources should not impede these activities - even when their purpose is to propose “critical visions and alternatives to the national reality,” as long they do not “degenerate into propagandistic activities.” 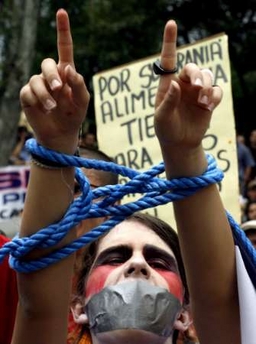 Some protestors were not assuaged. “It is not sufficient,” said William Jiménez, general secretary of the UCR Union of Retirees. “They are trying to demobilize the public universities with this clarification.”

But Olman Segura, Rector of National University, said he is “delighted” with the Tribunal’s recent statement. He said the march had been planned before the Tribunal released it, and he joined protestors only to “reiterate the importance of university autonomy.”