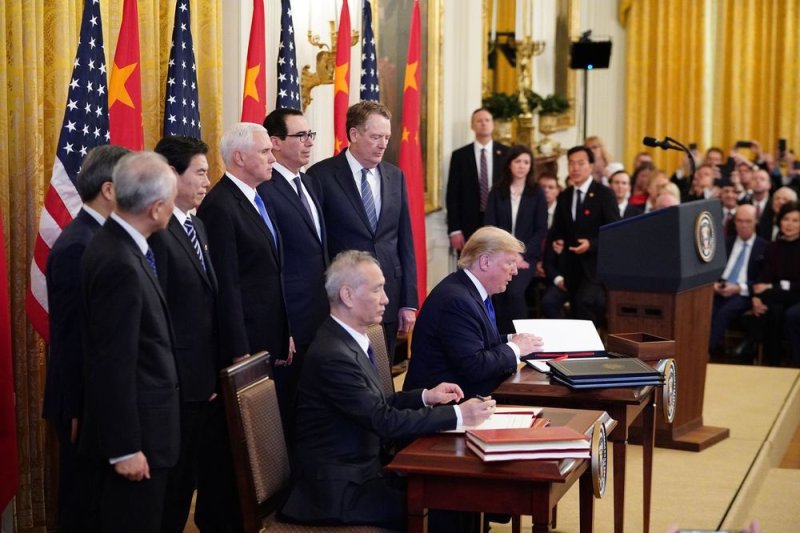 US and China sign phase one of trade deal

The U.S. and China signed what they billed as the first phase of a broader trade pact on Wednesday amid persistent questions over whether President Donald Trump’s efforts to rewrite the economic relationship with Beijing will ever go any further.

The deal commits China to do more to crack down on the theft of American technology and corporate secrets by its companies and state entities, while outlining a $200 billion spending spree to try to close its trade imbalance with the U.S. It also binds Beijing to avoiding currency manipulation to gain an advantage and includes an enforcement system to ensure promises are kept.

Read the full text of the agreement here.

The ceremony in a packed East Room at the White House included Trump, dozens of American business people and U.S. lawmakers and Chinese officials and marked a rare moment of friendship lately between the world’s two largest economies. Acrimonious talks stretching back almost three years have roiled financial markets, cast a cloud of uncertainty over investment decisions and hurt growth in both nations.

“This is a very important and remarkable occasion,” Trump said. Fixing what he sees as the injustices of past trade deals is “probably the biggest reason why I ran for president,” he added. “Together we are righting the wrongs of the past.”

In a letter to Trump read out at the ceremony, Chinese leader Xi Jinping said the deal proved the two sides could work together to bridge their differences and declared it “good for China, the U.S. and the whole world.”

The deal, sealed on the same day the House voted to refer articles of Trump’s impeachment to the Senate, seems most focused on arriving at peace in the trade war. Among its requirements is a resumption of the economic dialogues that past administrations have held with China.

But the new pact has already been criticized for what is missing. It does nothing to address areas like what U.S. authorities have long claimed is China’s state-backed hacking of American companies and government institutions. Nor does it require the Asian power to reform the vast web of state subsidies that form the spine of its model of state capitalism and have helped fuel the rapid growth of Chinese companies internationally.

The administration says many of those issues will be covered in a second phase of a deal, though when those talks will begin and how long they will take remains uncertain. In the meantime, the U.S. is also set to maintain tariffs on roughly two-thirds of imports from China, something that Trump on Wednesday said was essential as leverage over the country until it agreed to further reforms.

Asked about a phase two deal, Chinese foreign ministry spokesman Geng Shuang said Thursday afternoon that Beijing and Washington would have to to accommodate each others’ main concerns while implementing phase one.

“The two sides need to work together in the spirit of equality and mutual respect to strictly observe the trade agreement, accommodate each other’s core concerns and implement the phase one agreement,” Geng told reporters in Beijing.

“As soon as this kicks in we’re starting phase two,” Trump said. “I will agree to take those tariffs off if we’re able to do phase two, otherwise we don’t have any cards to negotiate with.”

Trump’s top negotiator, U.S. Trade Representative Robert Lighthizer, told reporters ahead of the signing that the administration was focused on implementing the initial agreement in the short term. Any further negotiations would only come after that, he said, adding that the initial implementation of phase one could take until the spring.

Business groups broadly welcomed the agreement. But the lack of clarity on where things would go next also led many to call for those to be pursued more urgently so that tariffs could be lifted. The U.S. Chamber of Commerce said it was critical for the two sides to begin negotiations on a second phase “as soon as possible”.

“The work isn’t done yet,” said Craig Allen, head of the U.S.-China Business Council, which represents American companies doing business in the Asian nation. “The phase-one agreement should be swiftly followed by continued phase-two negotiations on remaining issues.”

Democrats in Congress, meanwhile, blasted the agreement, saying Trump — in agreeing to the limited pact — gave away vital leverage he might have used to resolve tougher issues in the trade relationship, including China’s “massive subsidies” to some key industries. “The administration, in order to get a deal at all costs before the 2020 election, has thrown the American worker and American business overboard,” Senate Minority Leader Chuck Schumer said.

Chinese state media greeted the deal with cautious optimism but also fear it could fall apart. “It is such a paradox that makes many people worry: Can a preliminary trade agreement, reached during a period when China-U.S. strategic relations are clearly declining, really work,” the English-language Global Times said in an editorial.

Trump called the deal more focused than a broader one that was on the table in May when talks broke down, triggering a summer of escalation that prompted wild swings in financial markets. He argued the deal was tougher as well. But missing from the agreement are many of the requirements for Chinese legal changes that U.S. negotiators accused Beijing of abandoning then, prompting the May breakdown.

The deal states China must apply criminal penalties on anyone caught stealing commercial secrets and do more to stop the sale of pirated goods online, as well as fake pharmaceutical products. It also requires Beijing to deliver an action plan within 30 days of the deal taking effect on how it intends to meet its commitments on intellectual property.

Separately, it includes a broad commitment for China to stop pressuring American companies investing in the country to share technology with local joint-venture partners and for the government to stop supporting or directing Chinese firms to buy up strategic technologies by acquiring foreign companies. Both have been chief complaints of the U.S., which has curbed inbound investments from China, particularly in the tech sector.

One stated aim of the U.S. crackdown on China and companies like Huawei Technologies Co. has been to curtail their efforts to control strategic sectors like fifth-generation mobile networks and, as part of Xi’s “Made in China 2025” program, to dominate 21st century industries like artificial intelligence and robotics.

In his letter to Trump, read out by Chinese Vice Premier Liu He at the ceremony, Xi cited the “spirit” of the deal and urged Trump to allow investment by Chinese firms and said he hoped that “the U.S. side will treat fairly Chinese companies”. He also urged the U.S. to allow continuing collaboration by universities and other institutions “to promote the mutual trust and cooperation between the two countries.” Both Chinese investment and research exchanges as well as the thousands of Chinese students in the U.S. have been a target for national security hawks in Washington who argue they are part of a broader technology cold war playing out.

Officials insist that they are harvesting significant commitments from Beijing that mean the first phase of the agreement will benefit U.S. businesses and workers even if discussions never go any further. Already Promised

Many of the IP commitments in the deal, however, appear to be ones that China had either made already or was moving to address. Over the past year, it has made a rapid-fire series of legal changes to beef up protection. A new foreign-investment law that took effect on Jan. 1 bans administrative agencies from forcing companies to transfer technological knowhow as a cost of entry to the Chinese market. It exposes officials who disclose or leak trade secrets gleaned from regulatory approvals to potential criminal penalties.

The Trump administration says what separates its deal most from others is the enforcement mechanism it establishes. Rather than rely on a slow-moving World Trade Organization dispute system that Trump in any case has already hobbled by blocking the appointment of top judges, the new agreement with China would allow the administration to move to punish Beijing with tariffs or other measures within 90 days if officials decided it was breaking its promises.

But even Lighthizer acknowledged Wednesday that the effectiveness of the mechanism will depend on Beijing. “This deal will work if China wants it to work,” he told reporters. And Senator Ron Wyden, the top Democrat on the Senate Finance Committee, likened the mechanism and its requirement for consultations to a weak “telephone tree.”

The deal is also unique in the breadth of specific Chinese purchase commitments it contains, which some critics in the U.S. see as uncomfortably reminiscent of the sort of state-directed central planning American diplomats have spent decades trying to get China to abandon. Even those purchase promises, the details of which are contained in a secret annex to the agreement signed on Tuesday, face questions.

The text of the pact released Wednesday specifies $77.7 billion in additional Chinese purchases of manufactured goods including aircraft, $32 billion in new purchases of agricultural products, $52.4 billion in energy and $37.9 billion in services in the two years through December 2021.

China has committed to increase purchases from the U.S. over two years*

But it also left significant questions over whether U.S. farm exports to China to reach the $40 billion to $50 billion annual level that Trump has promised, which would mean doubling the $24 billion in agriculture and related products it imported from the U.S. in 2017, before the trade war began. “Signing the deal is the easy part,” Ken Morrison, a St. Louis-based independent trader, said by phone. “I have yet to hear a sound argument on how China will execute this deal.”