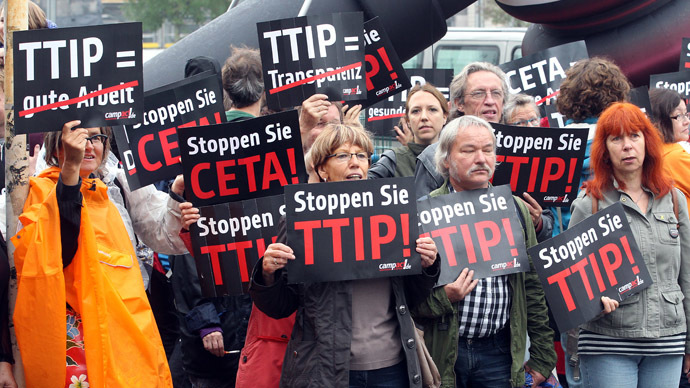 US and EU begin laying the groundwork for a trade agreement

Two weeks after reaching a handshake agreement to calm trade talks and back off new tariffs, the United States and European Union are beginning to lay the formal groundwork underpinning any deal.

On Tuesday, the State Department sent a cable to U.S. embassies across Europe, directing them to identify business areas ripe for lowering of tariffs or cutting of red tape, according to a readout of the cable provided to CNBC. The communication placed particular emphasis on deals that would increase U.S. energy and soybean exports, two areas highlighted in a joint statement the U.S. and the EU put out following the July 25 meeting.

The State Department declined to comment, citing a policy not to confirm or deny internal communications. But the move represents an effort to source deliverables for talks set to take place when a delegation from the European Union visits Washington later this month.

European Commission President Jean-Claude Juncker and high-level U.S. counterparts have been discussing additional meetings to take place in the coming weeks, an EU spokesperson told CNBC. In the meantime, Juncker’s senior trade advisor and an unnamed senior EU trade official will visit Washington on Aug. 20 to "flesh out the ideas that are being exchanged."

Business executives dining with President Donald Trump at his Bedminster, New Jersey, property on Tuesday evening peppered Trump with questions about the status of various trade negotiations. According to attendees, he demurred on China ("It’s really hard to get to a deal," one attendee paraphrased him as saying) but pivoted to Canada, Mexico and Europe, citing "good discussions with the EU" led by top Trump economic advisor Larry Kudlow.

Deal in the pipeline?

Among the considerations in current talks is potential U.S. involvement in Germany’s Nord Stream 2 pipeline, a Russian natural gas pipeline into Germany that became the subject of sharp criticism from Trump during this year’s NATO Summit.

During the expanded bilateral meeting between the EU and the U.S. on July 25, Juncker told Trump that "most" EU countries disagree with German Chancellor Angela Merkel’s decision to broker the Nord Stream 2 deal with Russia, according to a senior administration official, who said the U.S. could potentially get a "piece" of the pipeline business.

An EU spokesperson said the pipeline was "briefly touched upon in the meeting, in the context of the EU’s intention to import more LNG from the U.S." and that the project "does not contribute to the Energy Union’s objectives."

The White House has yet to discuss the specific role the U.S. would play in the pipeline deal, but experts suggest its most effective position would be to serve as a counterweight to Russian dominance of the energy supply and pricing market. Constructing new liquefied natural gas terminals across Europe would be a major step toward that goal.

"Merely the development of the projects — even if they’re not done — starts to create pressure on the Russians," says Mark Lewis, managing partner of Bracewell in Washington, D.C., who specializes in oil and gas transactions. "The key is to have those terminals in Lithuania and Poland and the northern Baltic."

On Aug. 9, the European Commission published a report on talks with the United States and Europe’s LNG diversification, touting the 14 projects underway that could receive U.S. gas if U.S. regulations on LNG exports are lifted and the price is right.

"Diversification is an important element for ensuring the security of gas supply in the EU," said Commissioner for Climate Action and Energy, Miguel Arias Cañete. "Increasing imports of competitively priced liquefied natural gas from the U.S. is therefore to be welcomed."