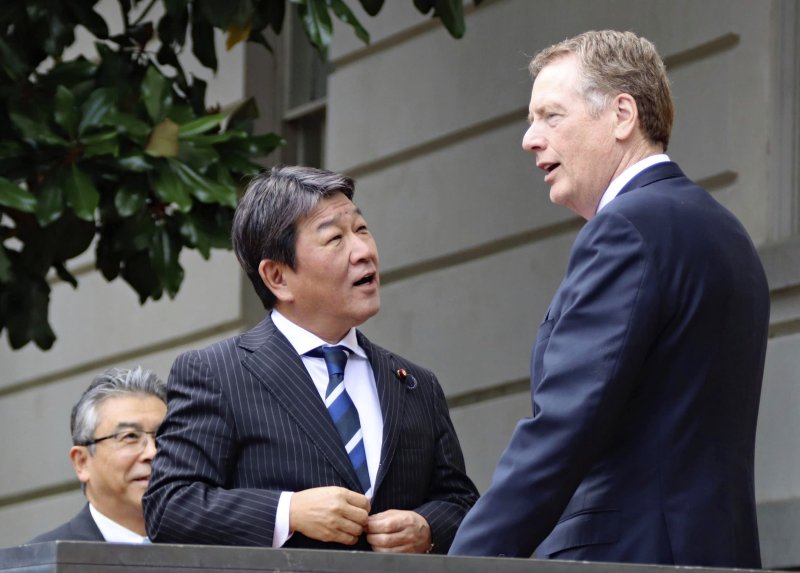 US and Japan to discuss next trade talks in early 2020, USTR says

WASHINGTON (JIJI) – The United States and Japan will begin consultations early next year in order to enter into negotiations on a broader trade agreement than the one signed in October, the Office of the U.S. Trade Representative said in a statement on Wednesday.

U.S. Trade Representative Robert Lighthizer said in the statement that President Donald Trump is expected to sign the implementing proclamation for the recently signed trade agreement next week.

The statement was issued after Japan completed the domestic procedures needed for the pact’s effectuation, which the two countries hope will come on Jan. 1, 2020. The Diet endorsed the bilateral pact on Wednesday.

“I commend Japan’s quick action to approve” the pact, Lighthizer said. Washington’s eagerness for the potential new round of bilateral trade talks comes as Trump looks to score diplomatic wins ahead of his reelection campaign next year.

The recently signed trade deal focuses on tariff cuts for such things as agricultural and industrial products, while sidestepping more contentious areas such as automotive tariffs. U.S. industry groups and farmers have said the deal is insufficient, and called for a more comprehensive trade accord covering more goods and services.

Reflecting such domestic voices, Trump told the press on Wednesday during a trip to Britain that the October agreement “is a partial deal,” adding, “The rest will come next year.”

The Trump administration plans to bypass U.S. congressional approval procedures for the pact based on a special measure under the Trade Promotion Authority law that grants the president unilateral authority in trade negotiations.

Tokyo and Washington have agreed to launch discussions on the scope of negotiations on the potential second trade deal within four months of the first deal going into effect. Japan hopes to include in the agenda for the upcoming negotiations unresolved issues, such as possible elimination of U.S. tariffs on Japanese automobiles and auto parts.

Under the recently signed pact, Japan will open its beef and pork markets for U.S. produce at levels on par with those it promised under the Trans-Pacific Partnership multilateral free trade agreement, which entered into force late last year.

Meanwhile, the pact excludes rice, for which Japan is cautious about opening its market further. Japan has also avoided setting a low-tariff import quota for U.S. dairy products. The U.S. side is expected to push for improvements in these areas.

Also on Wednesday, U.S. farm industry groups lauded the Japanese parliament’s approval of the trade accord.

The U.S. Meat Export Federation said the pact, which will give U.S. red meat “greater access for Japanese consumers,” is “a major breakthrough for U.S. agriculture.”