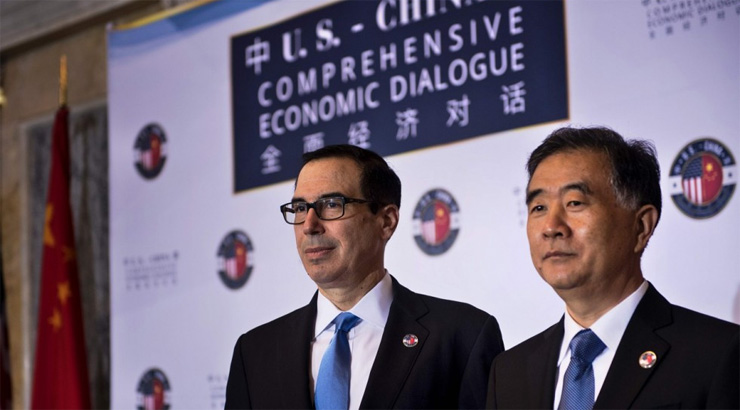 US Secretary of the Treasury Steven Mnuchin and Chinese Vice Premier Wang Yang pose for a photo before an opening session at a US and China comprehensive Economic Dialogue at the US Department of the Treasury on Wednesday.

US, China fail to agree on trade issues, casting doubt on other issues

WASHINGTON: The United States and China failed on Wednesday to agree on major new steps to reduce the U.S. trade deficit with China, casting doubt over President Donald Trump´s economic and security relations with Beijing.

The annual economic dialogue session in Washington ended with canceled news conferences, no joint statement and no new announcements on U.S. market access to China. The two sides had a "frank exchange" but failed to agree on most major bilateral trade and economic issues that were important to the United States, a senior U.S. official said on condition of anonymity because he was not authorized to speak publicly.

"China acknowledged our shared objective to reduce the trade deficit which both sides will work cooperatively to achieve," U.S. Treasury Secretary Steven Mnuchin and U.S. Commerce Secretary Wilbur Ross said in a brief statement, highlighting a rare point of consensus.

The Chinese embassy in Washington cast the talks in a positive light, saying in a statement that both sides had acknowledged "significant progress" on the 100-day talks and would to work together to reduce the trade deficit.

"The two sides will expand areas of cooperation in services and increase trade in services; expand mutual investment, and create a more open, equitable, transparent and convenient investment environment," the embassy said.

Both sides agreed that one of the solutions to address the trade imbalance is for the United States to expand exports to China, instead of reducing imports from China, said Chinese Vice Finance Minister Zhu Guangyao after the conclusion of the talks.

To address the imbalance, China has been urging the United States to remove regulations on export control and increase the exports of high-tech products to China, the official Xinhua news agency cited Zhu as saying.

China will push for this in a one-year action plan for economic cooperation which both sides discussed, Zhu said. The session had been billed as a follow-up to Trump´s first meeting with Chinese President Xi Jinping at his Mar-A-Lago, Florida, estate in April when Trump hailed Xi´s cooperation in curbing the threat from North Korea.

Trump said that this would lead to better trade terms for China. The two leaders launched a 100-day economic plan that has produced some industry-specific announcements, including the resumption of American beef sales in China and pledged to grant limited U.S. access to some financial services sectors.

But there have been no new initiatives since, and Trump has grown increasingly frustrated with China´s lack of pressure on North Korea. His administration has threatened new sanctions on small Chinese banks and other firms doing business with Pyongyang.

Ross and Mnuchin said the U.S. position on the China trade relationship would be guided by "the principles of balance, fairness, and reciprocity on matters of trade will continue to guide the American position so we can give American workers and businesses an opportunity to compete on a level playing field.

"China´s delegation leader, Vice Premier Wang Yang, left the Treasury building without speaking to reporters. Earlier, he had warned that confrontation between the two countries would be damaging.

Investors interpreted the negative signals from the talks and lack of new trade announcements as making it more likely that Trump would forge ahead with broad steel tariffs or quotas based on a national security review, sending steelmakers´ shares soaring.

Shares of United States Steel Corp closed up 4.8 percent, while AK Steel rose 3.6 percent and Nucor rose 2.2 percent. Trump, asked by a reporter at the White House after the stock market closed whether he would impose steel tariffs, said: "Could happen."