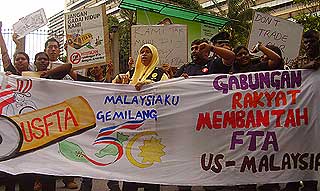 THE US-Malaysia Free Trade Agreement talks, which is poised to enter into its ninth round, is due to be delayed further pending the appointment of a new US top trade official, according to a senior US State Department official.

Deputy assistant Secretary of State Scot Marciel said the US Trade Representative is "not in place" as he is still undergoing the confirmation process.

"But we’ll need the US Trade Representative to do that and that will take a bit more time to come forward with concrete proposals on the way ahead. That sounds like a bureaucratic answer but that’s the reality," he said, at a media briefing in Kuala Lumpur yesterday. Former Dallas mayor Ron Kirk who has been selected as the US Trade Representative, replacing Susan Schwab, is awaiting the Senate approval before taking up the position.

Marciel, who also serves concurrently as the US ambassador to Asean, accompanied State Secretary Hillary Clinton to Indonesia earlier.

Clinton was the first US State Secretary to visit the Asean secretariat in Jakarta.

En route to Thailand for the 14th Asean summit on Saturday, Marciel said he has been briefing officials in the region and bilateral discussions and getting feedback from the various countries.

The US is Malaysia’s number one trading partner and has, in recent years, ranked as among the top three foreign investors.

For 2008, it was the second largest investor with investments totalling RM8.7 billion.

So far eight rounds of negotiations have been concluded and talks were delayed as the new administration took over in Washington.

Meanwhile, the chief US negotiator for the bilateral talks Barbara Weisel also said the trade office is still waiting for Kirk’s nomination.