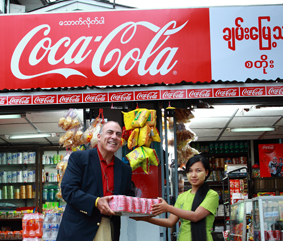 WASHINGTON, May 21 (KUNA) — The US and Myanmar signed Tuesday a Trade and Investment Framework Agreement (TIFA), creating a platform for "ongoing dialogue and cooperation" on trade and investment issues between the two countries.

The TIFA was signed between Acting United States Trade Representative (USTR) Demetrios Marantis and Deputy Commerce Minister Dr. Pwint San of the Republic of the Union of Myanmar.

The USTR said in a statement that as part of this dialogue, the two sides will work together to identify initiatives that support the ongoing reform program and promote inclusive development that benefits the people of Burma, including the poorest segments of its population.

For his part, Marantis affirmed that the US "supports reforms that lay the foundation for a peaceful and prosperous future.

According to the statement, on the important issue of labor rights, a continuing area of concern to US stakeholders and the international community, the agreement signed today "recognizes the importance of respecting, promoting, and realizing in each Party’s laws and practices the fundamental labor rights as enumerated by the International Labor Organization (ILO) and of effectively enforcing their respective laws and regulations on worker rights."

Under the TIFA, the US will seek to work with the government in Nay Pyi Taw "to achieve further improvements in the protection of worker rights."

Following the easing of sanctions in 2012, data showed that through the first three months of 2013, bilateral trade totaled USD 90 million, including USD 89 million in US exports to, and USD one million in US imports from Burma.

In 2012, Burma’s total two-way goods trade with the world was roughly USD 20 billion.