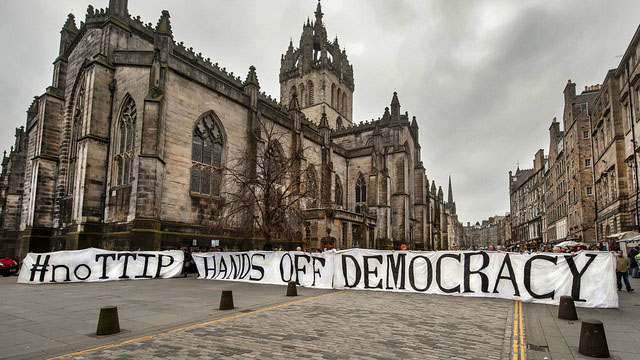 US ’open’ to new talks on free trade pact

The US is open to resuming talks on the stalled free trade deal with the European Union, commerce secretary Wilbur Ross said on Tuesday (31 May).

"It’s no mistake that, while we withdrew from TPP [Trans-Pacific Partnership], we did not withdraw from TTIP [Transatlantic Trade and Investment Partnership]," Ross told the CNBC broadcaster.

"The EU is one of our largest trading partners, and any negotiations legally must be conducted at the EU level and not with individual nations," he said. "Thus, it makes sense to continue TTIP negotiations and to work towards a solution that increases overall trade while reducing our trade deficit,” he added.

Ross’s comments came as US president Donald Trump complained on Monday about Germany’s trade surplus with the US and vowed to correct the imbalances.

"We have a MASSIVE trade deficit with Germany, plus they pay FAR LESS than they should on NATO & military. Very bad for U.S. This will change," Trump tweeted.

The US president also vented his frustration over Germany’s trade policy and Nato allies’ spending when he met EU leaders last week.

His behaviour prompted German chancellor Angela Merkel to warn that Europe could no longer rely on its allies and needed to take its fate into its own hands.

During Merkel’s visit to Washington in March, the chancellor attempted to convince Trump to revive TTIP.

Merkel reportedly spelled out to Trump that he cannot do individual deals with EU members and that the US administration would have to negotiate with Brussels.

Ross later told the Financial Times, a British newspaper, that the US is open to revive talks on TTIP, adding that Europe will have to compete with with China and Japan to show willingness to do the first deal with the new US administration.

But despite his statement, Merkel’s economic minister Brigitte Zypries last week said “it is not likely the US will resume negotiations over TTIP".

Launched in 2013, talks on the trade deal stalled after Trump came into office in January, pursuing a more protectionist US trade policy.

The EU has been cautious over American overtures on the trade deal, and accelerated discussions to agree on free trade with Japan and to reform an older trade accord with Mexico.

Malmstroem reiterated that at the Brussels Business Forum last week, arguing that the EU needs time “to evaluate and reflect”.

“We both need a bit more time, and to know there was shared ambition and common ground,” she said.

Among his first acts as president, Trump withdrew the US from another major trade agreement, TPP, which 12 countries had signed in the Asia-Pacific region.

Earlier this month Asia-Pacific trade ministers agreed to try to revive TPP without the US.