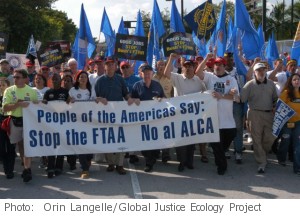 The United States has not proposed a new trade bloc in the Americas since negotiations for the Free Trade Area of the Americas collapsed in 2005.

US planning a new trade agreement with Latam, but through NAFTA

The President Barack Obama administration is “exploring” a regional trade plan for the Americas that would be the most ambitious hemispheric initiative in years, but contrary to the failed experience of George Bush’s FTAA (Free Trade Area of the Americas), this time it would be instrumented through Nafta (North American Free Trade Agreement) partners Mexico and Canada, according to a Miami Herald interview of Andres Oppenheimer with Secretary of State John Kerry.

“It’s something I actually have asked some folks here to explore, and I’ve had conversations with a couple of people outside of here who were very knowledgeable about hemispheric relationships,” Kerry said. “And they’re very encouraging about it, so we’re going to try to do our due diligence on this, and I’m really hopeful.”

Since NAFTA will turn 20 years old in 2014, U.S. officials say next year’s anniversary will be a golden opportunity to re-launch it and then try to expand it to the rest of the continent..

The US, Mexico and Canada would be “the major block of it, reaching out to the rest of Central America, the Caribbean, Latin America,” Kerry said who admitted that the plan would be to start in North America, because several South American nations are “not yet willing to forge closer commercial ties with the United States”.

According to Oppenheimer top aides to Kerry say the plan to re-launch NAFTA could come as early as February, when President Barack Obama is scheduled to meet with his Mexican and Canadian counterparts at a North American Leaders’ Summit in Mexico. That summit is supposed to be a regular annual meeting, but it did not take place this year.

The United States has not proposed a new trade bloc in the Americas since negotiations for the Free Trade Area of the Americas collapsed in 2005, when Brazil, Argentina and Venezuela effectively killed the idea at a summit in Mar del Plata, Argentina, attended by then President George W. Bush.

Since then, the United States has signed separate trade deals with Peru, Colombia and Panama, but has not tried to resurrect plans for a regional free trade deal in the Western Hemisphere.

Instead, the Obama administration has launched a Trans-Pacific Partnership (TPP) negotiation with 11 Pacific rim countries — mostly Asian countries such as Japan and Malaysia, but also including some Latin American Pacific Coast countries, such as Mexico — and a separate Transatlantic Trade and Investment Partnership (TTIP) with 28 European Union nations.

If Washington signs the proposed trans-Pacific and trans-Atlantic trade agreements, several major Latin American countries not included in the TPP — such as Brazil, Argentina and Venezuela — would be left outside the two biggest global trading blocs.

Kerry’s remarks about his intentions to explore a re-launching of NAFTA came in the context of a question of why the Obama administration has been the first one in many years that has not proposed a hemispheric trade agreement, and why he has personally spent so little time in Latin America.

Since Kerry’s appointment as secretary of state in February, he has made 20 foreign trips, but only two to Latin America. He has visited 36 countries, but has yet to visit Mexico, one of the most important nations in terms of U.S. relationships.

According to top Kerry aides, the three NAFTA countries are planning to discuss, among other things, a regional energy agreement. Last week, Mexico’s Congress passed a historic bill that will change the constitution to end 75 years of total government control over its oil reserves, allowing foreign investors to help develop unexplored oil fields.

A regional energy agreement could make NAFTA the world’s leading producer of oil and gas, particularly since the successful development of shale deposits and the fracking technology.