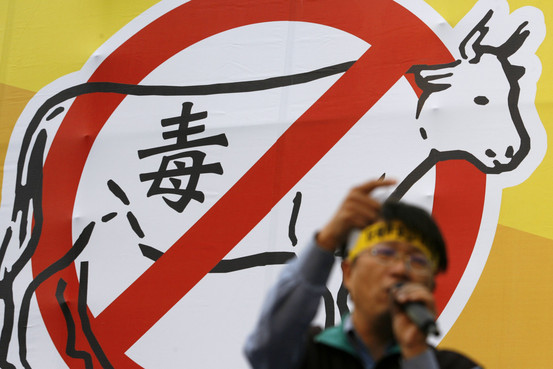 WASHINGTON — The United States has ruled out a free trade agreement with Taiwan amid a dispute over beef imports, days after the island signed a sweeping accord with longtime adversary China.

Taiwan’s President Ma Ying-jeou has tried to sell the landmark accord with China to voters in part by arguing that the island will now be able to pursue free trade agreements with more countries, as Beijing would no longer object.

"The United States has no plans to begin talks with Taiwan about an FTA at this time," David Shear, the State Department pointman on China-Taiwan ties, said Wednesday at the Carnegie Endowment for International Peace.

"Despite our excellent relations, I am disappointed by the lack of progress the United States and Taiwan have made on trade issues" in recent years, said Shear, a deputy assistant secretary of state.

Negotiations between the United States and Taiwan on a Trade and Investment Framework Agreement, often a precursor to a full-fledged FTA, have been dormant since 2007. Shear said such talks would be the best forum to discuss trade.

With lawmakers from farm states leading the charge, the United States has been pressing for years for lucrative Asian markets such as Japan, South Korea and Taiwan to accept more US beef, causing friction with the close US partners.

The countries imposed restrictions in late 2003 after mad cow disease was detected in an American herd. Some scientists believe humans can contract the brain-wasting illness by eating infected animals’ brains and spinal cords.

Taiwan agreed with the United States in October to let in more beef products but the island’s parliament reimposed restrictions three months later after a public outcry.

Despite the disagreement, Shear said he hoped the beef issue would not "overshadow" other trade and he stood by US security commitments to Taiwan.

The United States in January approved a 6.4 billion-dollar arms package for Taiwan, defying protests from China.

"There’s no hesitancy on the US part to sell arms to Taiwan," Shear said in response to a question.

"We’re in constant touch with the authorities in Taiwan in this regard and we’re always willing to hear their views as we consider what we’re going to do with regard to future possible arms sales," he said.

The last package included helicopters, Patriot missiles and mine-sweepers but not a top item on Taiwan’s wish-list — F-16 fighter-jets. Security experts say China has secured a growing edge over Taiwan as it invests heavily in its military.

Lin Chong-Pin, a professor at Taiwan’s Tamkang University who formerly served in the defense ministry, said there was "tremendous frustration" on the island over weapons sales.

"There is growing doubt in Taiwan, that perhaps in the future under consistent pressure from Beijing or Washington, the United States may one day say, ’Sorry, we won’t be able to do it’," he said.

China considers Taiwan, where the mainland’s defeated nationalists fled after losing the civil war in 1949, to be a province awaiting reunification, by force if necessary.

But Ma has worked to improve relations since taking office in 2008, culminating in the sweeping June 29 Economic Cooperation Framework Agreement with the mainland.

Ma says the deal will boost the economy and help Taiwan enter the global mainstream, but his opponents fear it would chip away at the island’s self-rule and could in time turn it into a Chinese territory like Hong Kong or Macau.

Obama recently pledged to move ahead on a free trade agreement with South Korea, but parts of his Democratic Party are unenthusiastic about free trade deals for fear of hurting low-paid US workers.