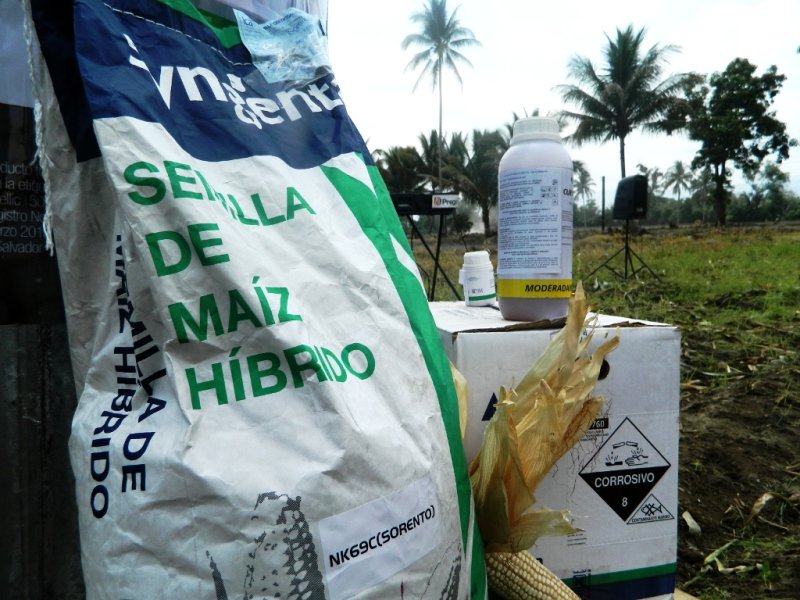 US tying aid to agribusiness in El Salvador, groups warn

WASHINGTON — Criticism has mounted in recent months against the U.S. State Department for pressuring the government of El Salvador to reform a popular domestic seed-distribution program, allegedly in favor of gaining greater access for U.S. agribusiness companies.

Civil society concern over the issue culminated earlier this month, when farmers and activists rallied outside of the U.S Embassy in San Salvador. They also sent a petition, spearheaded by U.S.-based groups, outlining their concerns to Secretary of State John Kerry.

The embassy has reportedly been claiming that an Agriculture Ministry program to provide corn and bean seeds to small-scale farmers contravenes a controversial trade accord known as the Central America Free Trade Agreement, or CAFTA.

The petition, delivered on June 6, “denounce[ed] the manipulation of [development] funds by the U.S. Department of State against the current policy of purchasing Salvadoran non-transgenic seeds distributed” by the Salvadoran Agriculture Ministry, according to arelease.

“[W]e are outraged that the Embassy invokes … CAFTA to demand that the government of El Salvador remove the provision that promotes seed production by small domestic producers, with clear intentions to advance the interests of transnational agricultural companies.”

The issue revolves around the procurement policies used over the past two years by a Salvadoran government program called the Family Agriculture Plan. When it started a decade ago, the scheme was used merely as a way to reward political supporters. Yet following reforms two years ago, the plan has been widely lauded as a model for the entire region.

Supporters say the Family Agriculture Plan benefited some 400,000 small-scale farmers in El Salvador last year. The program is also being credited with rebuilding an agricultural sector and economy that has been badly damaged in recent years — including, according to critics, by CAFTA itself.

“In part because of CAFTA, El Salvador had been importing some 80 percent of its grains, even though it used to be able to produce most of its own,” Alexis Stoumbelis, executive director of the Committee in Solidarity with the People of El Salvador, a Washington-based advocacy group and an organizer behind the recent petition, told MintPress News.

“So the Family Agriculture Plan has been critical in rebuilding agricultural markets. The idea is to strengthen foods security and eventually move towards food sovereignty, to buy the best kind of seeds for the climate and ensure quality control for the country’s farmers.”

While technicalities related to trade and aid are at the heart of the current diplomatic dispute, Stoumbelis says this isn’t what’s motivating local anger.

“What’s central for farmers and others benefiting from this program is having the ability to buy produce from their neighbor,” she said.

“This is an issue of national sovereignty and democratic decision-making. We appear to have an embassy using the fact that this [aid deal] isn’t finalized to dictate to the government how it should legislate, including in such a way that goes against the kind of long-term sustainable economic growth the country is trying to promote.”

This is not the first time that U.S. diplomats have been accused of forcibly using their offices on behalf of big business. In a report last year, Food & Water Watch, a Washington-based watchdog group, suggested that the State Department over the past decade has sent centralized directives to U.S. embassies to promote biotech products and respond to industry concerns.

“Between 2007 and 2009, the State Department sent annual cables to ‘encourage the use of agricultural biotechnology,’ directing every diplomatic post worldwide to ‘pursue an active biotech agenda’ that promotes agricultural biotechnology, encourages the export of biotech crops and foods and advocates for pro-biotech policies and laws,” the report, which used documents released by WikiLeaks, noted.

“The State Department views its heavy-handed promotion of biotech agriculture as ‘science diplomacy,’ but it is closer to corporate diplomacy on behalf of the biotechnology industry.”

At issue in El Salvador is an aid package worth some $277 million through a U.S. agency known as the Millennium Challenge Corporation. Set up by former President George W. Bush, the MCC is unique among U.S. aid agencies in its focus on disbursing grants rather than loans, but only in return for specific commitments related to good governance.

The current money, meant to be used largely for infrastructure and tourism projects along the country’s southeast coast, is the second such agreement between the United States and El Salvador. While the MCC approved the new tranche in September, development advocates say the State Department has repeatedly used the pending grant to pressure the Salvadoran government to enact legislation.

“The U.S. has offered an evolving set of demands, making the MCC approval process look more and more like a carrot-and-stick mechanism,” Stoumbelis said.

A year ago, the Salvadoran government passed a U.S.-pushed law opening up opportunities for public-private partnerships. But when that legislation disallowed such partnerships in certain key sectors — education, water, public security — Stoumbelis says U.S. officials expressed their disapproval and required additional reforms. Thereafter, the U.S. Embassy said the MCC money would be contingent on the passage of a money-laundering law, but then required additional reforms after that passed, too.

This spring, the embassy took issue with the procurement policies behind the Family Agriculture Program, saying it violated provisions in CAFTA that ensure that international and national companies are given equal standing in public procurement processes.

“The seed point is important, because it is an example where the government of El Salvador has to give confidence with respect to their obligations on [free trade agreements],” John Barrett, an economic counselor at the U.S. Embassy in San Salvador, said in April, asquoted in Spanish in the local media. “Everything has to be transparent and published.”

Neither the State Department nor the MCC would answer questions from MintPress. On Thursday, however, the U.S. Embassy in San Salvador did release a lengthyfact sheet outlining its positions on the issue.

“Failure to comply with [CAFTA] provisions risks creating a perception of non-transparency and failure to respect due process … A system based on such principles benefits, not hurts, all small farmers and the country’s agricultural productiveness.”

The embassy also noted that MCC is now “holding the government to its commitments … prior to signing.”

The issue, perhaps, is that nearly all of the companies that ended up being chosen are domestic.

“In January of 2014, the Salvadoran government produced a new call for bids, which provided a much more open bidding process with no exclusions, and even included categorical consideration of seed ‘importers,’” Nathan Weller, program and policy director for EcoViva, a California-based group that works on issues of sustainability in Central America, told MintPress from El Salvador.

“The [Salvadoran] government is currently working with three businesses that import seed from international sources, because they offered the cheapest price and best product. It’s important to note that these three businesses also participated in past procurement processes, and clearly have not been excluded based on domestic or foreign affiliation.”

Weller says it is particularly perplexing that U.S. officials would point to the Family Agriculture Program as uncompetitive, given that the initiative itself has successfully opened up the government’s procurement process.

Prior to 2012, he says, just five companies fulfilled the government’s corn procurement, and even then at prices double what is currently on offer from the domestic producers. Under the reformed procurement process, the government today gets its corn and bean seeds from 18 producers — and at far lower prices.

Previously, just a single producer made up nearly three-quarters of corn orders. That company, Semillas Cristiani Burkard, bid through a subsidiary of Monsanto, the U.S. agribusiness giant.

Today there is “frustration with inconsistencies perceived with United States, per their tacit approval of past seed acquisition by the Salvadoran government in a less transparent and non-competitive way by historically accepting higher prices for an inferior product, from fewer or even a singular business,” Weller said.

“In this case, through procurements prior to 2012, a Monsanto affiliate was awarded over 70 percent of the procurement order with more expensive seed product that offered yields achievable only with expensive chemical additives provided by the same company.”

Ultimately, the current dispute may hinge on interpretations of obscure trade agreement language. Yet even under that agreement, the State Department’s actions strike some as odd. After all, if U.S. corporations feel they have a legitimate claim regarding discrimination by the San Salvador government, CAFTA has arbitration mechanisms specifically for this purpose.

“Instead, we have an embassy interceding on behalf of U.S. corporations,” Stoumbelis, of Committee in Solidarity with the People of El Salvador, said. “The most concerning part of this is that the MCC approval process is becoming a Trojan horse for the U.S. trade agenda — on behalf, apparently, of U.S. agribusiness.”