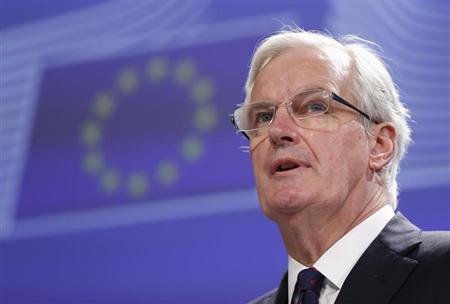 US, UK want financial services as part of trade pact

By Doug Palmer and Douwe Miedema

WASHINGTON — The United States and the UK aim to include financial services in a proposed free-trade agreement between Washington and the 27-nation European Union, the British ambassador to the United States said on Thursday.

The accord would aim to smooth out regulatory differences that have stunted U.S.-EU trade in areas such as agriculture, chemicals, pharmaceuticals and autos. The EU is already the largest U.S. trading partner.

"We are pretty keen, pretty clear, that as the owners of the two most significant international financial centers, on either side of the Atlantic ... that we would both like to see financial services covered by these negotiations," said Peter Westmacott, the UK ambassador to the United States.

He was speaking during an event at the National Foreign Trade Council, a U.S.-based business group.

EU financial services chief Michel Barnier has also come out in favor of the move, a spokeswoman for the bloc said.

A Treasury Department official said, "The United States will seek to obtain improved market access for services on a comprehensive basis, including for financial services."

Finding common ground on regulatory and market access issues could encourage banks and insurers to expand across the Atlantic instead of moving to other parts of the world.

The agreement would likely address issues such as what percentage of people on the board of a foreign bank need to be U.S. citizens, and what stake foreign banks can hold in U.S. financial institutions, another UK diplomat said.

Thornier problems would have to be dealt with separately, the diplomat said, such as derivatives regulation and the challenge of "too big to fail" banks.

The White House formally notified Congress in March of its plan to negotiate a comprehensive trade and investment agreement with the EU.

That letter outlined the administration’s desire to negotiate new market openings for U.S. services companies and to improve regulatory cooperation across the Atlantic. It did not specifically mention financial services sectors such as banking or insurance.

But working groups from the U.S.-EU business coalition are already looking at market access barriers and regulatory issues related to insurers and banks and considering comments from companies, a U.S. business official said.

Talks on the free-trade pact are expected to begin in July, although no dates have been announced.

Britain hopes the Group of Eight summit meeting in Northern Ireland in June can help set the stage.

"We think it might be sensible drawing the world’s attention to the importance of (the trade pact) before, during or after the G8 summit ... that might be a good time to get it all going," Westmacott said.