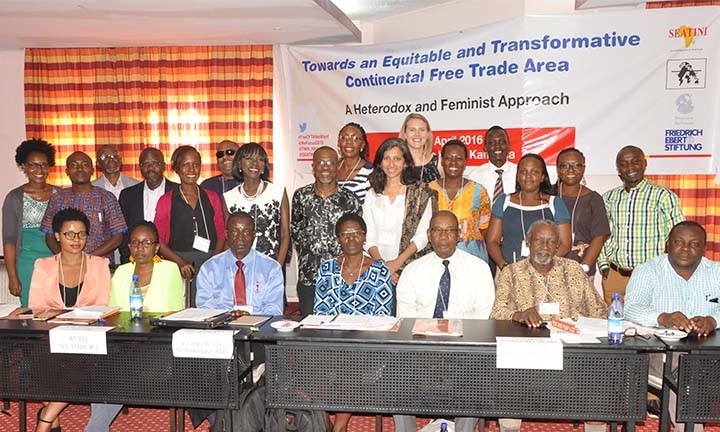 Regions Refocus has compiled five “Virtual Teach-ins” of footage from the workshop “Towards an Equitable and Transformative Continental Free Trade Area: A Heterodox and Feminist Approach.”

These videos capture teach-ins delivered at the workshop Towards an Equitable and Transformative Continental Free Trade Area: A Heterodox and Feminist Approach (East Africa), co-convened by Third World Network-Africa, Regions Refocus, and Southern and Eastern African Trade, Information, and Negotiations Institute (SEATINI) in collaboration with Friedrich-Ebert-Stiftung, in Kampala, Uganda, from 27-30 April 2016.

The workshop’s methodology of “slow thinking” enables progressive thinkers and movement leaders to collectively analyze existing literature and hone specific policy proposals. Highlighting the sectoral imperatives of a transformative trade agenda in Africa, these teach-ins present heterodox and feminist economic analysis of Africa’s role in the global trade system and the potential interventions of the CFTA into this context.

Virtual Teach-in #1: What’s at Stake with the CFTA?

This Virtual Teach-In, featuring Tetteh Hormeku of Third World Network-Africa, provides an introduction to the Continental Free Trade Area currently under negotiation by the African Union. Providing a rationale for a heterodox and feminist approach to the CFTA and civil society advocacy surrounding it, this Virtual Teach-In outlines the transformative potential – and pitfalls – of the CFTA in relation to the agenda for structural economic transformation in Africa.

Virtual Teach-in #2: The Myth of Trade-Led Industrial Policies in Africa

Professor Julius Kiiza, lecturer at Makerere University’s Department of Political Science and Public Administration, leads this teach-in on the relationship between trade and industrial policy. In a forceful argument that African countries must avoid “sleepwalking into a disaster,” Professor Kiiza challenges the neoliberal orthodoxy of promoting open markets and incentivizing foreign direct investment (FDI). Calling for state-led “smart industrial policy” (as opposed to the fallacy of market-driven trade policy), Professor Kiiza outlines a distinction between “orthodox” and “strategic” trade and industrial policy.

Framing his remarks in terms of the rural economy – encompassing both farm and non-farm activities, with agriculture at its core – Third World Network-Africa’s Tetteh Hormeku delivers this teach-in on the agrarian transformation required for Africa’s economies. To ensure food security but also – crucially – to support agrarian transformation beyond food production, African states should invest in extension services, irrigation, concessional lending and other financial instruments, the provision of technology, and support of property rights especially for women, Tetteh explains.

Jointly led by Jane Nalunga, Director of SEATINI, and Tetteh Hormeku of Third World Network-Africa, this teach-in focuses on the relationship between the potential CFTA and the financial services sector, within the context of the ongoing financialization of the African and global economy. Jane and Tetteh speak of the need to re-think policies introduced during the period of structural adjustment and to revisit efforts by newly independent African states to build economic growth through financial instruments that benefitted their people, including through agriculture.

As a sector responsible for much of the resource generation – and expatriation – in Africa, extractive industries formed the subject of this teach-in by Pauline Vande-Pallen of Third World Network-Africa. Examining the relationship between gender, employment, sustainability, and extractivism, Pauline poses the question of how continental frameworks – the African Mining Vision (AMV), in addition to the CFTA – can expand opportunities for women and communities in mining areas. Focusing on salt mining in Keta, Ghana as an example of domestic indigenous enterprise that is both environmentally sustainable and employing the skills and leadership of women, Pauline considers concrete ways forward for extractive sector policy to ensure and expand opportunities for women and communities in mining areas.