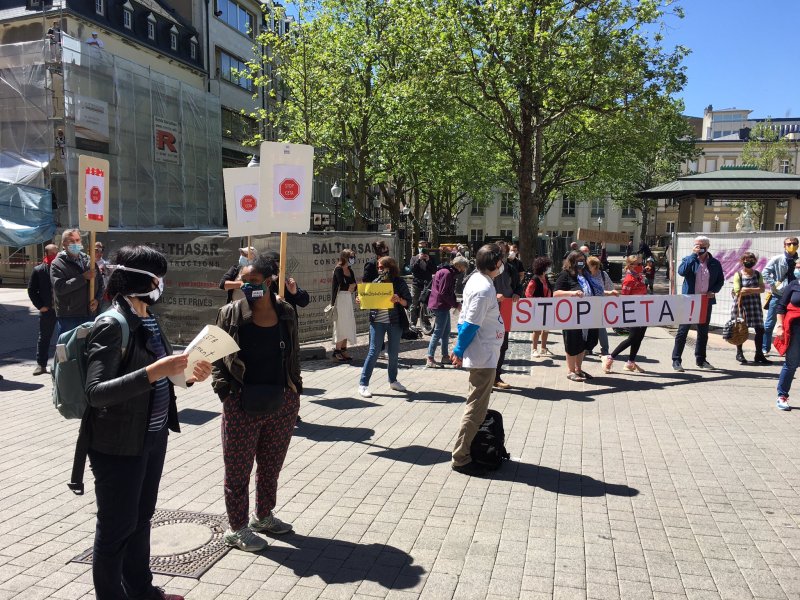 MPs are voting on the controversial agreement this Wednesday after the vote had to be rescheduled due to the outbreak of the pandemic, despite calls to further postpone it. The impending vote has sparked anger from environmental organisations. Stop TTIP/CETA and Votum Klima for instance called the vote a political scandal.

According to Blanche Weber, who represents the Stop CETA platform, the vote on the agreement could be a severe blow to people currently feeling the sting of the ongoing health crisis. She argued that it was irresponsible to pass such an important vote while Luxembourg still finds itself in the state of emergency. What makes matters even worse, she argued, is that the ongoing crisis has clearly kindled the desire for a more local economy within society.

"Stop CETA! Stop CETA!", Jeff Cigrand can be heard shouting on Place d’Armes. The president of the "d’Partei" political party took it upon himself to protest the agreement in order to respect the social distancing measures.

The Left similarly oppose the agreement. MP David Wagner argued that it was "catastrophic" that the Greens and the LSAP support the idea that the vote should take place this Wednesday. His critique was unequivocal: "I don’t know if it’s merely a joke or opportunism."

Opposition parties had joined efforts to call for the postponement of the vote - without success. LSAP president Georges Engel stated that the functioning of the Chamber of Deputies should not be impacted by the current situation.

According to David Wagner, the Greens will vote against the agreement because it goes against the principle of a circular economy. In his words: "CETA and other agreements following a similar guideline are complete ’bullshit’. And the worst part: we are still going in a direction where we produce even more intercontinental trade [instead of local production]."