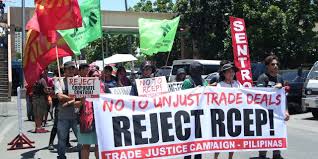 Workers, farmers, fishers, indigenous peoples, rural women, and health and trade justice advocates have all come out on the streets over the last few weeks to lead various protest actions across the region against the Regional Comprehensive Economic Partnership Agreement or RCEP—touted as the biggest regional free trade and investment deal.

The negotiations are now at a critical stage and governments are desperate to project substantial progress in the talks. Over the last few months, various media sources and insider information have reported that State parties are close to forging a deal that will further open up markets, ease restrictions on investments, provide greater investor protection, and oblige governments to adhere to higher standards of intellectual property rights protection. Leaders are expected to come out today with a Joint Declaration announcing a preliminary deal, which will signal a continuation of the talks until a final deal is forged by year’s end or within the first quarter of 2020.

The RCEP talks were launched in 2012 and the aim was to conclude a modern, comprehensive, high quality, and mutually beneficial economic partnership by 2015. It was seen as a way to boost economic growth and equitable development and advance regional cooperation and integration.

The fact that the negotiations have dragged on longer than expected and missed numerous deadlines indicates a lack of consensus among State parties on how ambitious a deal RCEP should be.

Despite the failure to come to an agreement, the joint statement will try to mask this lack of consensus and project broad unity among the State parties. It will celebrate the substantial progress in the talks and cite the number of chapters already concluded. The statement could even announce that a partial agreement has been forged and that negotiations will move forward to iron out the remaining kinks. They will try to downplay the fact that many of the more contentious issues—what civil society groups have called the toxic elements of the deal—like investor state dispute settlement mechanism, the TRIPS+ provisions, concerns over plant variety protection, and the enforcement mechanism in the intellectual property rights chapter- have been set aside for the time being as State parties themselves have raised concerns over these provisions.

Over the last seven years, people’s opposition to this mega deal has been consistent and resolute. Despite the lack of transparency, civil society organizations and social movements have consistently engaged the RCEP negotiations from the inside and outside.

We have participated in good faith in the stakeholder engagement processes struggling to put into 2-minute interventions concrete concerns over the negative impact the agreement would have on peoples’ rights and welfare. The messages have been clear. RCEP is a threat to peoples’ lives and livelihoods. It is an agreement that advances the agenda of corporations first and foremost. It is an agreement cloaked in secrecy and negotiated with limited public scrutiny. And the people have consistently called on their respective governments to heed the concerns of the people and cease from forging this deal.

We have met with our government and trade negotiators, providing technical inputs and concrete positions on the critical issues. We have issued our statements to the media, and we have organized public discussions to inform grassroots movements and the public about this proposed agreement and its potential impacts on peoples’ rights and welfare.

We will remain vigilant in our opposition to RCEP in the wake of efforts by States to push for an interim agreement now and continuing negotiations to ratchet up the level of ambition in the future.

We will join the wave of peoples’ resistance across the globe against neoliberalism and corporate globalization and continue to demand economic policies that recognizes the primacy of human rights, and advances the interest of the poor and marginalized over the interest of corporations.