We oppose the negotiations of the EU-Mercosur FTA going forward 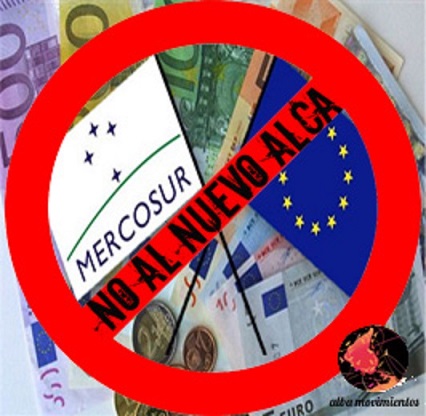 Translated by Anoosha Boralessa, March 2016. Not reviewed by bilaterals.org or any other organization or person.

We, ATTAC Argentina, members of the CADTM – AYNA network, express our opposition to the negotiations, recently relaunched by the Mauricio Macri government, to sign a Free Trade Treaty (FTA) between the countries of Mercosur and the European Union,

During the recent visit of the French President, François Hollande, who arrived in Argentina with a party of 30 businessmen, an item placed on the bilateral agenda by Argentina was the request that France unblocks the treaty negotiations, put on hold from 2004. In this respect, both Brazil and Argentina, as well as other countries of the South, asked EU countries to open their agricultural sector in exchange for the request of the Northern countries to open service and manufacturing sectors. The current request is that the French government intervenes to unblock the negotiations with a view to signing the treaty.

This position taken by the Argentine government does not take us by surprise. From the time of the presidential campaign, “Let us change”, the Front of Mauricio Macri openly said that Argentina had “to enter the 21st century and to trade economy and culture”. Thereafter, the new government is pushing to agree to regional agreements such as the Pacific Alliance, to establish bilateral agreements with the United States and to deepen trade relations with the European Union.

The signing of an FTA with the EU is nothing new in Latin America. The European block has already signed treaties with Mexico, Peru, Colombia, Chile and Ecuador, as well as with several Central American countries. In each case, the negotiations have been conducted without allowing civil society and Parliament to participate and denying them any access whatsoever to the drafts under negotiation. Once the treaties were signed and published, this became evident, because this produced a total lack of transparency: the treaties signed will produce significant negative results while many of the benefits promised have never materialized. For Latin American countries, the agreements meant leaving to a side any kind of protection for national production chains, their industry and small and medium sized businesses, as well as abandoning the possibility of state companies that guarantee the provision of, for example, public services such as education and health. Also, the effects on workers, both male and female, have been highly negative, when one considers the job losses and the enlargement of the service economy that leaves thousands without access to employment. These treaties do not take into account the gaping asymmetries between these countries and the EU, which at the global level, is considered the principal trade power.

FTAs in general are founded on the premise that free trade in se is a motor for economic and social development. But, just as ten years ago we denounced the meaning of the FTAAs, today again we must do the same thing with other mutations of free trade such as FTAs driven by the European Union. For this reason, we demand that the Argentine government withdraws from the negotiating table for this agreement.

We, ATTAC Argentine, declare our opposition to the inroads free trade is making in the region. We also make a call to discuss and to look for forms of independent and democratic organization in order to construct alternative proposals to regional integration that prioritize the interests of the people. No to FTAs! No to the Mercosur – EU free trade treaty! Yes to integration for the peoples! The world is not a commodity!