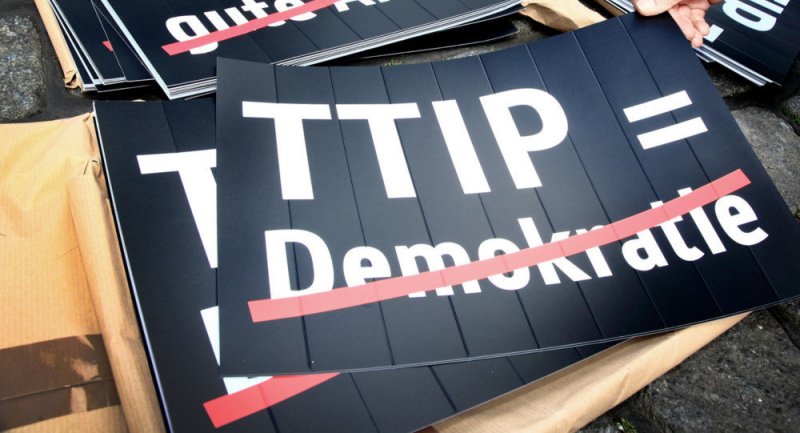 What I didn’t read in the TTIP reading room

Katja Kipping was one of the first German MPs to gain access to the new TTIP reading room opened in Berlin this week, and she has written up a report of her experience. We thought it was well worth translating from the original, ‘The Opposite of Transparency’.

TTIP, the EU-US free trade deal, has secrecy written all over it. Those responsible for it live in dread of any public scrutiny. If it was up to me, I would give everyone who’s interested the chance to make up their own minds on the text of the agreement in its current form. Sigmar Gabriel, Minister for Economic Affairs and a top cheerleader for TTIP, has now set up a reading room in his ministry where since the beginning of February German MPs can each spend two hours looking at those texts on which consensus has already been reached.

A political friend of mine asked me the day before whether she could come with me into the reading room. I had to say no. After a long, tough struggle with the government, at least MPs are able to read the text, but they are the only ones. We are not even allowed to take security-cleared specialists with us into the reading room. As for members of the public, who will ultimately have to bear the brunt of TTIP, they are to have no access whatsoever to the secret text. Not what transparency looks like in my book !

Even the registration procedure for the reading room speaks volumes. Once I’d registered, I was sent the instructions on how to use the room. The first thing that I noticed was that the terms and conditions had already been the subject of negotiations between the European Commission and the USA. Get your head round that : TTIP isn’t even signed yet, and already individual countries have lost the right to decide who gets to read the texts, and on what terms.

The following extract from the rulebook for MPs who, like me, want to use the reading room reveals the attitude towards democracy that lurks behind TTIP : “You recognise and accept that in being granted access to the TTIP texts you are being extended an exceptional degree of trust.”

Now I’d always thought that elected MPs have a right to information. Yet the TTIP negotiators (and who gave them their legitimacy ?) reckon they are GRANTING us access out of the goodness of their hearts. Access as a sign of exceptional trust. Whoever wrote that – did they really think that we MPs would feel flattered ? To me it smacks more of totalitarianism. ‘Granting access’ and ‘extending trust’ is not the language you use if you really believe in democracy.

Tuesday 2 February was my day. I’d registered for the reading room. A guard took me in through security and asked me to lock away my jacket and my bag. He checked that I wasn’t taking any camera or mobile phone into the reading room, and then knocked on a door. The heightened level of secrecy made me all the more excited as to what I was going to find, but the room itself was nothing special. There were eight computer work stations, and I was only allowed to sit at the one designated for me. A friendly woman sat in the room. She got me to sign the visitor rules – if you don’t sign, you don’t get in, so I signed. There was a thermos of coffee and a plate of biscuits in the corner. Yet no amount of caffeine or blood sugar would have made it possible to get through the 300 or so pages of text in the two hours I had available to me.

The criticism has often been made that the TTIP texts only exist in English. Not every MP has grown up using English as a second language, and you can just imagine what would happen if US senators were only granted access to the texts in French. So much for equality between negotiating partners. There were dictionaries in the room but no internet access, and thus no way of using any translation apps, which didn’t make the translation of the technical legal wording any easier.

Even those MPs who have no difficulty reading official English texts are faced with a problem : without a legal commentary you are still in the dark as to the potential impacts of many of the terms used. Let me give an example that I expressly did not see in the reading room, but in an insider report coming out of Brussels.

The US side has assured the EU that there will be no restriction on its ability to introduce ‘science-based regulations’ in future. Any unbiased person might conclude from this that it will still be possible to restrict the use of certain types of genetically modified organisms within the EU. But the USA considers large parts of the EU’s food safety regime not to be ‘science-based’, so a resourceful trade barrister could make use of the clause in question to launch a successful lawsuit against those food safety regulations. For us MPs to have a proper understanding of the potential significance of the terms used, we’d need not only to have the full text of TTIP but also to get all the wording checked by international trade lawyers, and these are precisely the people we are not allowed to have in the room with us. In some cases, however, you don’t need that much imagination to work out how a crafty lawyer could make use of the wording – in the interest of big business, of course.

What I DIDN’T read

Given that Sigmar Gabriel claims that TTIP is going to be of particular benefit for small and medium-sized enterprises in Germany, I was naturally curious to read what the documents had to say about them. Now, I am not allowed to tell you anything about the text that I read. But I never signed anything to say that I can’t reveal what I DIDN’T read. So, for the record : I read nothing that even vaguely supported Gabriel’s claim.

Of course, this is no great surprise. A recently leaked Council document made no secret of the main objective of the EU negotiators in the TTIP talks, namely : access to the massive procurement contracts of the USA. The complex tendering processes involved are not the usual stamping ground of small businesses, either here or there.

The two hours I had in the reading room were obviously not enough to read all the documents. Yet afterwards I realised that nothing I had read would make me rethink any of my previous criticisms of TTIP. I read nothing to alleviate my concern that the US side wishes to make life more difficult for public and community enterprises and to secure better terms for transnational corporations in the battle for public tenders. I also read nothing to calm my fears that EU negotiators are prepared to sacrifice our social and environmental standards for the prospect of winning lucrative contracts for big European firms.

I hope I’m not breaking any state secret if I register my amazement that the documents are simply crawling with typos. The word ‘and’ is regularly written ‘andd’ and ‘the’ often appears as ‘teh’. Either the negotiators are really shoddy workers or this is one of those famous security measures we’ve heard about. Just in case anyone manages to get round the camera ban and copies a screenshot of the secret documents, these specially introduced ‘errors’ will enable the authorities to work out who was the source of any leak.

It is revealing in itself that the Ministry for Economic Affairs is prepared to go to such lengths in order to keep the text of TTIP under wraps. And they have every reason for doing so. Anyone who was going into these negotiations to enhance environmental protection, consumer protection and labour standards would have nothing to fear from transparency. Anyone who’s engaged in selling out democracy, on the other hand, is obviously going to want to avoid public scrutiny. If Sigmar Gabriel and the negotiators are really so convinced of the benefits of TTIP, why don’t they just make the text available to everyone online ?