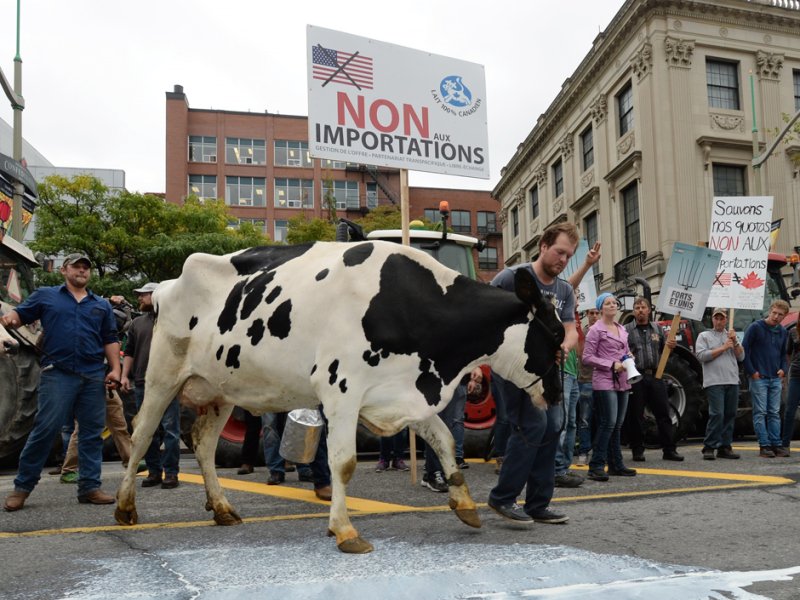 Why Canada should get out of NAFTA – while it still can

The pressure’s on. While Canadian Trade Minister Chrystia Freeland gamely smiles and tells reporters every day that a deal on NAFTA is “close,” President Trump tweets that he’ll “cause the ruination of Canada” with 25 percent tariffs on Canadian-made cars if the renegotiated deal isn’t “totally on our terms. Totally.”

“And every time we have a problem with a point, I just put up a picture of a Chevrolet Impala,” Trump adds. The Chevy Impala is made by General Motors workers in Oshawa, Ontario.

It’s not an idle threat. TD Bank economists project job losses of 160,000, most of them in Ontario, if Trump imposes a 25 percent tariff on cars made in Canada. Scotiabank economists project the tariffs would cut Canada’s economic growth by 25 percent – in an economy that’s already slowing down, facing mounting unemployment, and growing public anger.

But the losses wouldn’t stop with the auto industry. They’d bubble out from there because the auto sector is at the very heart of manufacturing in Canada, the driving force of the economy. The impact would be devastating on the jobs, wages, and living standards of all those whose livelihoods are connected directly and indirectly to the auto industry. The effect would be immediate on cities like Windsor, which is wholly dependent on the Detroit automakers Ford and Chrysler.

It’s unlikely that Trump would stop at tariffs on auto, steel, aluminum, newsprint, and softwood lumber. Punishment would be total, as demonstrated by Trump’s $200 billion in punishing tariffs on China, with another “$267 billion ready to go on short notice if I want.”

Canada exported $57 billion in cars and another $15 billion in auto parts to the U.S. in 2017. The tariff threat using a U.S. “national security” law shows just how far Trump is prepared to go in order to force Canada to sign onto a NAFTA agreement “totally on U.S. terms.”

Previous free trade deals have hollowed out manufacturing and industrial jobs from the U.S. (and Canada) as corporations moved operations to low-wage, low-tax, and de-regulated and unregulated jurisdictions around the world. Gigantic super-profits followed for the big corporations, and mass unemployment, wage cuts, and falling living standards for workers.

Trump has promised to bring those jobs back to the U.S., and he may have accomplished part of that with the U.S.-Mexico deal, which requires that 75 percent of autos be produced in the U.S. and Mexico in order to be sold in North America. The deal also requires that 40 percent of Mexican autoworkers be paid a minimum of $16 an hour, which Trump expects will slow the exodus of U.S. auto plants to Mexico. This is no benign gesture to raise wages and living standards of exploited Mexican autoworkers, who earn $3 an hour and will never be able to buy the cars they build. It’s about keeping auto jobs in the U.S. by making it unprofitable for automakers to move their operations over the border.

For Canada, it will encourage U.S. Big Three automakers to move operations to the U.S. It will put even more pressure on unions and workers, to drive down livable wages in Canada to poor levels paid in the majority of right-to-work states where unions barely exist. It will pressure unions to adopt more of the two- and even three-tier wage rate systems that permeate the U.S. and have penetrated the auto industry in Canada for two decades.

But the U.S. wants more. Dairy farmers in the U.S. have been told that Canada’s supply management system in agriculture is the cause of their very real misery.

Supply management has protected farmers in Canada for decades, putting a financial floor under dairy and poultry producers, providing milk, egg, and poultry quotas in exchange for guaranteed incomes. These protections are under attack by agribusiness—multi-national corporations in agriculture which aim to increase profits at the expense of farmers.

Trump’s demands include opening the Canadian market to U.S. Class 7 ultra-filtered milk used to make cheese and yogurt, worth $200 million USD a year. This would create havoc in Canada, forcing plant closures and job losses in production. An estimated 15 percent cut to milk quotas could bankrupt small farmers, dealing a lethal blow to supply management in the dairy sector, greater than the impact of all previous trade concessions (TPP, CETA, etc.) combined.

But Canada isn’t the problem. It’s U.S. capitalism’s “sink or swim” free market policies which have created a glut and dropped the price of milk through the floor, forced family farmers into enormous debt, and pushed many into bankruptcy and foreclosures. It’s U.S. policy that has abandoned farmers from New England to the Midwest states, and it’s the Trump administration that’s to blame.

Trump also wants many other concessions. Chief among them is NAFTA’s Chapter 11 Investor State Dispute Settlement Mechanism that allows corporations to sue governments for “future lost profits.” Another is Chapter 19’s dispute settlement mechanism, which sets up expert panels to settle disputes between NAFTA governments over trade. Canada has won every dispute over softwood lumber that the U.S. has launched because of these impartial panels.

Trump also wants complete access to Canada’s cultural industries and its public services, including health, education, childcare, long-term care, and everything else.

Trump wants continued and unfettered access to oil and other natural resources. He is opposed to climate change remediation or any action that would impede corporations and corporate profits.

The past months have been an education for working people, with a front row seat to watch how U.S. vulture capitalism and the Trump government regard Canada and the world. What the U.S. president and administration propose to do to Canada to get their NAFTA terms is exactly what they do to every other country where they do business. Their tactics, including insults and threats of economic sanctions and instability, have shocked Canadians, but for the U.S., this is business as usual.

The Canadian federal government should assert Canada’s sovereignty and independence, and get out of NAFTA now, while we can. It should end the continuing integration of Canada into the U.S. economy and the pattern of subservience to U.S. economic, social, and foreign policy demands.

Instead of NAFTA, we need a trade policy that is multi-lateral and mutually-beneficial with countries around the world. We need an economic policy that puts job creation at the top of the agenda, starting with an industrial strategy that develops value-added manufacturing to build the whole country, and public ownership of oil, gas, and other natural resources.

Our priorities should be strong universal social programs, health, education, and childcare; reversal of climate change; and foreign policy objectives of peace and disarmament, instead of rearmament, war, and aggression.

Another world is possible and urgent.

Elizabeth Rowley is a politician, writer, and political activist. Elected as the first woman to lead the Communist Party of Canada, Rowley has been active in the fight for public education and healthcare, local democracy, and for labor and civil rights. She writes for People’s Voice, Canada’s leading socialist newspaper.