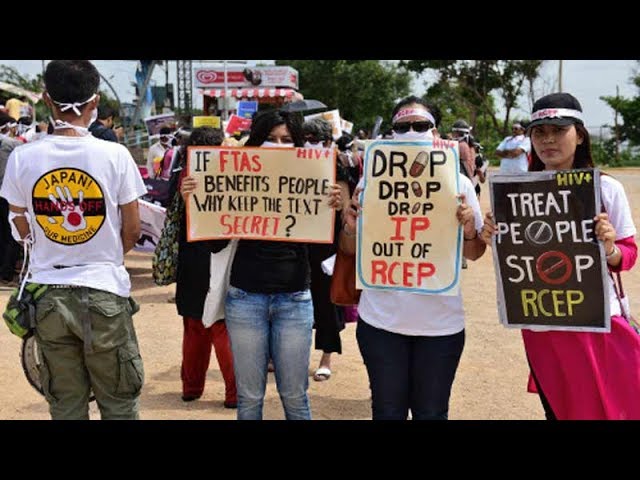 Why race against clock on trade pact ‘shrouded with secrecy’, asks NGO group By Minderjeet Kaur

A coalition of 61 NGOs has asked the government the reason for racing against the clock in concluding the world’s largest trade pact — the Regional Comprehensive Economic Partnership (RCEP) — with details “shrouded in secrecy”.

Azlan Awang, a volunteer with the Bantah RCEP coalition, said the negotiations will be concluded on Sept 27 but the public had no access to information on the impact of the agreement on everyday life.

“It is a big agreement impacting everyone but the details are shrouded in secrecy.

“We believe that the rakyat must know the scope of the RCEP being negotiated to avoid any clear and present dangers to Malaysia,” he told reporters here.

He said the group is unable to comment much on the agreement except for leaked versions of the negotiation text a few years ago, which revealed an alarming set of commitments and obligations that covered almost every aspect of Malaysia’s socio-economic life.

Azlan asked the reason to sign the pact as Malaysia enjoys good trade relations with other countries and “we can go directly to them”.

The coalition was previously active in the Trans-Pacific Partnership Agreement, a now-defunct proposed trade agreement involving 12 countries, including the US and Mexico.

Azlan said they feared RCEP may favour the foreign corporate sector and they may flood the market with foreign goods and take advantage of new rules to bypass the country’s regulations.

For instance, he said provisions to export local timber directly to other countries may be allowed. “But converting the logs into furniture and other items is what adds value and creates jobs.”

He said the agreement may also allow vaping services to be advertised.

He said Bantah was shocked to know that the government was at the tail-end of the negotiations when the coalition of NGOs was called to Putrajaya to give its opinions and views.

“Their argument for not calling us earlier was that they had heard our views on TPPA before this.

“We understand the economy is not at its most dynamic stage now and needs injection but to sign a pact that may not benefit us is not the way.”

“Therefore, the government cannot rush into an agreement. Information and public engagements are needed,” said Azlan.