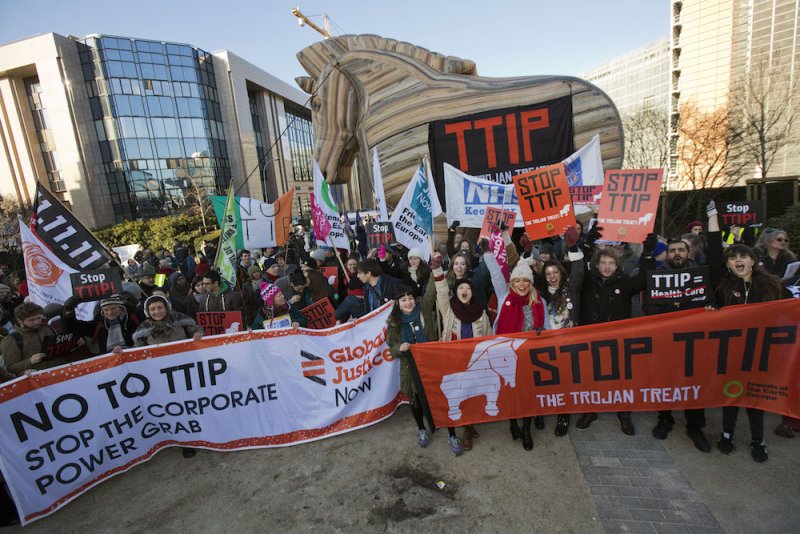 Why TTIP will live on – but not in the EU

by Ioannis Glinavos, Senior Lecturer in Law, University of Westminster

The Transatlantic Trade and Investment Partnership – also known as TTIP – could be the next casualty in the Brexit fallout. But not in the way you might expect. The controversial trade agreement between the EU and United States could well fall apart, only for the UK to pick up the pieces for its own trade deal.

For the UK, leaving the European Union means leaving the numerous trade deals it is party to. This includes the free trade it has with the 27 other EU members and the EU’s agreements with 50 other countries. It also means exclusion from the deals currently being negotiated – an agreement with Japan and, of course, TTIP. But for the EU, Brexit could mean the end of TTIP altogether.

The idea behind TTIP, billed as an ambitious and comprehensive trade and investment agreement, is to promote growth in Europe and the US by opening up the US to EU firms and vice versa. It will do so by cutting the red tape of regulation that firms face when exporting, and would set new rules to make it easier and fairer to export, import and invest overseas.

Sounds like a great thing overall then? Not necessarily. Many have expressed concerns over the openness of the negotiations, the content of the deal and the influence of big business into drafting and approving standards.

The two main sticking points are a clause called the investor-state dispute settlement, which would allow companies to sue states directly for alleged violations of the terms of the deal, and also how it will affect the legal protections of agricultural products. It might sound trivial but trade in agricultural products is a major issue for negotiators trying to satisfy say, on the one hand, French wine and cheese producers and, on the other hand, American GM crop growers and enhanced meat producers.

The EU gives strong legal protection for numerous products – particularly in the form of designated origins (Cornish pasties must come from Cornwall and Feta cheese from Greece, for example). This gives them a competitive advantage in a big market – which is why the US opposes it.

There are also concerns about food safety and quality, especially around modified food products available in the US, but currently banned in Europe. These concerns have to be weighed up against the huge market that European exporters would have access to in the US. It is a market that currently has big restrictions to it – British lamb and venison cannot currently be exported to the US, for example.

Due to long and organised resistance, the project, which started in June 2013, has been faltering. No agreement has yet been reached, nor does it seem close to being found on the most contentious issues. Brexit might be the final nail in the coffin.

It is widely acknowledged that the main driver for TTIP has been the UK. The reason for this is that successive British governments have seen their role as the bridge between an economically liberal US and a protectionist and traditional EU.

The UK had been a foothold of Anglo-Saxon capitalism in a Europe that is dominated by governments which are very protective over their industries and generally play a large role in their economies. Once this bridge with the UK is severed, what is there to ensure that reluctant European policymakers will push through a deal in the face of widespread popular resistance?

Without the British push towards liberalisation the deal risks dying a quick death, contrary to recent proclamations from both the EU and the US that a deal is expected by the end of the year.

There is an ironic twist in the fate of TTIP, however. Once it leaves the EU, the UK is likely to pursue its own trade deal with the US. And it is extremely unlikely to differ from TTIP for a few reasons.

First, trade deals take a lot of time to negotiate. The EU is having such a hard time concluding deals not because it is bureaucratic and sclerotic, but because it has to negotiate a long series of contentious issues. Second, considering Britain’s long history of championing openness and free trade, coupled with the economic struggles it will face in a post-Brexit world, who can seriously argue that issues like the environment and small farmers will be a negotiating priority?

We are heading for TTIP on steroids. Contrary to the hopes of some Leave supporters, Brexit might save Europe from TTIP, but not Britain.