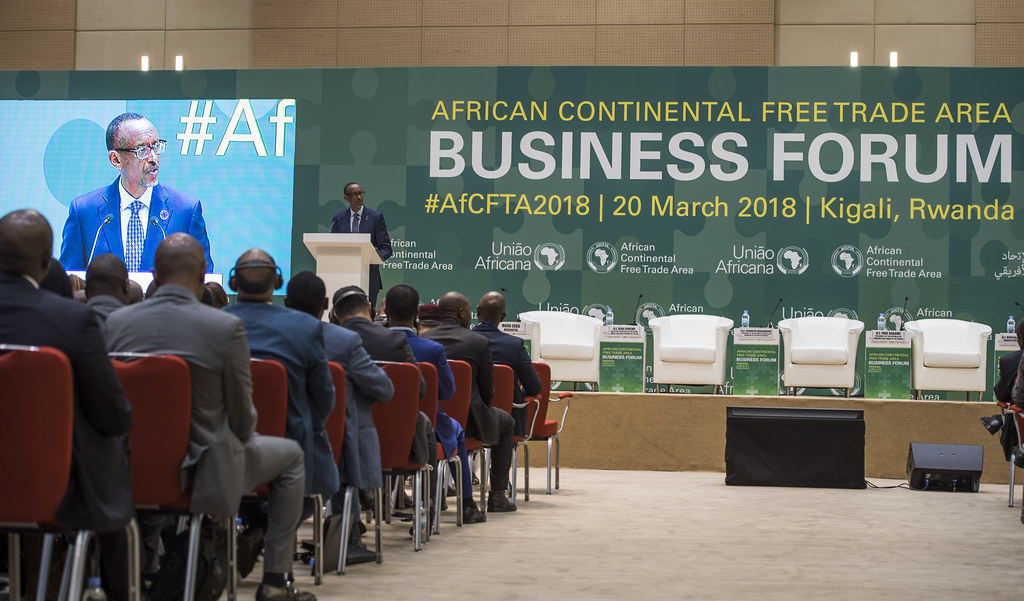 Why we need to talk about the African free trade area

By Andreas Grünewald and Arif Rüzgar

On 1 January 2021, the world gained another free trade area with the official launch of the African Continental Free Trade Area (AfCFTA), covering 55 member states, i.e. all the African countries except Eritrea. Its establishment has been widely welcomed not only in Africa but also in Europe – and indeed worldwide. It will give the African Union the chance to become a strong, independent player in the world economy – at least that is the optimistic forecast. And it is true that the economic weight of the countries making up the new free trade area has so far been modest in relation to gross world product. With an estimated cumulative gross domestic product (GDP) of around 3.4 trillion US dollars, the AfCFTA cannot rival other free trade areas such as the European Economic Area (EEA), with 19.2 trillion dollars (2018 total), or the North American Free Trade Area (NAFTA), with 23 trillion dollars. However, measured by population, the AfCFTA is one of the largest free trade areas in the world with 1.2 billion people (as opposed to 524 million in the EEA and 480 million in NAFTA).

The huge potential in terms of the pool of workers and consumers alone is enough to arouse hopes that the establishment of the free trade area will lay the foundations for a sustained economic boost for African economies. Multiple economic studies fuel these hopes. The United Nations Economic Commission for Africa has calculated that if tariff and non-tariff barriers to trade are dismantled quickly, the AfCFTA could boost trade between African countries by 50 to 100% by 2022. According to the World Bank, the free trade area also has the potential to lift 30 million people out of extreme poverty and increase the real income of African workers by around 10% over a 15-year period.[1] However, the great deal of goodwill that exists for the free trade area in Africa and also in Europe is not only a result of these numbers. Just as importantly, the AfCFTA is perceived as a pan-African initiative which African countries are using to take their economic fate into their own hands and initiate a process of pan-African development and integration. Many African intellectuals share this point of view, as do the European Commission and the German federal government, both of which are supporting the establishment of the free trade area financially and with specialised personnel.

Voices critical of the AfCFTA have so far received little public attention. However, there are good reasons to cast doubt on the high hopes pinned on the African free trade area. For example, economists at the Economic Policy Research Centre in Uganda point out that the growth potential anticipated as a result of the establishment of the AfCFTA is overestimated.[2] First, tariffs between African countries are already relatively low. Reducing them further will not be enough by itself to bolster trade within Africa. Second, and more importantly, the needs of African economies are not currently aligned.

Most African countries have a similar foreign trade profile, exporting mainly commodities, including agricultural products, metal ores and energy sources such as oil and natural gas, and importing consumer or capital goods. This means that African countries have only a few products to offer their potential African trading partners for which there is actually any demand among the latter. The lion’s share of their trade is with industrialised countries in the Global North, which mostly export industrial products. Trade between African nations accounts for only 17% of Africa’s total trade volume.

It is unrealistic to expect this proportion to increase to 60% due to the AfCFTA, as the African Union has in mind, while tariff reductions and the dismantling of non-tariff trade barriers remain the main tools for achieving this. Instead, what is needed is an active national and pan-African financial and economic policy that stimulates industrial production and diversifies African economies. This would lay the foundations for a sustained economic upswing, having a corresponding impact on distribution, and for a pan-African economic integration process, and would also increase trade between African countries.

Advocates of the African free trade area take the opposite approach, trusting that the removal of trade barriers will deliver a lasting economic boost for Africa. This belief is based on a free trade ideology that has shaped the world economy in recent decades and is enthusiastically propagated and applied by major players such as the World Trade Organisation (WTO), the World Bank and the International Monetary Fund (IMF). The European Union and in particular Germany are also advocates of this ideology, at least as long as it is to their advantage, and so it is no surprise that they are supporting the AfCFTA with both financial and human resources. At the same time, European governments have ensured that their own economic interests are also protected under the umbrella of the African free trade area. The free trade agreements that the EU has signed or is about to conclude with African regional economic blocs (such as the Economic Community of West African States (ECOWAS) and the Southern African Development Community (SADC)) or individual countries (such as Tunisia and South Africa) will remain in force within the AfCFTA. What’s more, ’most favoured nation’ clauses, such as those in the EU trade agreements with Ghana, Côte d’Ivoire and Cameroon, mean that the European Union can be sure that future tariff reductions undertaken by these countries within the AfCFTA will automatically be passed on to the EU.

In its current form, the African free trade area’s positive effects for participating countries remain limited. Those in Africa who stand to gain from the free trade area include, first and foremost, diversified economies such as South Africa and Nigeria as well as large companies that can tap into new commodity and sales markets. On the flip side, smaller countries with weak economies as well as small and medium-sized enterprises (SMEs) and agricultural smallholders who can do little to stave off the resulting extra competition will lose out. It is also doubtful whether workers’ income or conditions of employment will improve significantly, as labour law has not featured so far in the negotiations. On the contrary in fact: regulations to protect labour markets or the environment are explicitly not provided for in the AfCFTA. Thus, the AfCFTA is more likely to lead to greater regional disparities in Africa than to an economic development and integration process from which all African countries would reap the rewards. Last but not least, the problem of the fragmented, unequal integration of African economies into the world market will also persist.

From a left-wing perspective, the case needs to be made more strongly for not limiting the economic integration and development process in Africa to trade issues and instead focusing on debates on industrialisation and economic diversification, and therefore on an active financial and economic policy. The political debate about the African free trade area certainly offers opportunities in this regard, because the negotiations on the implementation of the African free trade area have by no means come to an end despite the start of trading under the AfCFTA. Some key decisions, for example on rules of origin, have yet to be made. These could be followed by discussions aimed at actively shaping the economic development and integration process from a policy perspective. An expansion of the range of topics, for example to include standardised labour rights and binding environmental standards, is also an important point that should be called for by leftist actors and trade unions. So let’s start talking about the African free trade area!