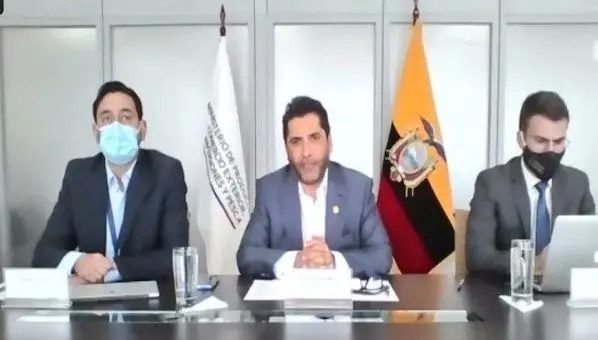 Will a US-Ecuador trade deal lead to a broader pact?

Ecuador and the United States have negotiated a phase-one trade deal, which is to be signed Tuesday in Quito. The deal addresses a limited scope of areas but would be part of a larger agreement to be negotiated later, according to Ecuadorean Production Minister Iván Ontaneda. What does the U.S.-Ecuador phase-one trade deal consist of, and what are the most sensitive or controversial aspects of the trade relationship that will need to be overcome? How likely are the two countries to engage in talks for a broader trade agreement in the near future, and how would that differ from the phase-one treaty? How might changes in the U.S. presidential administration in January, and in Ecuador following the scheduled February 2021 election, affect the future of the two countries’ trade ties?

Iván Ontaneda, Ecuador’s minister of production: “This phase-one trade deal consists of a short instrument focused on establishing disciplines and norms oriented toward four fundamental aspects: 1.) Modernize and technify customs processes to improve regulations, reduce costs of transaction and facilitate export and import operations; 2.) Harmonize regulatory measures and procedures involving trade and investments, ensuring transparency and efficiency among regulatory institutions in both countries; 3.) Establish mechanisms that prevent, control and sanction acts of corruption related to trade and investments, inside public and private institutions; 4.) Strengthen our micro, small and medium enterprises (MSMEs) through cooperation mechanisms that incorporate them into the commercial flow, providing access to credit, digital commerce and promotion. A key aspect of this phase-one trade deal is that it does not involve controversial or sensitive aspects. For example, market access of products, particularly agricultural ones, will not be included. If a future and more complete treaty with the United States takes places, then those subjects would be negotiated. However, this phase-one trade deal does contain subjects that strengthen institutionality in regulatory issues, the reduction of processes and formalities, and the modernization of customs procedures as well as ease export, import and transit operations for economic operators. Our government’s main objective is to begin negotiations for a broad trade agreement with the United States. Together, we have overcome several aspects that negatively affected our trade relations in the last four years, not only with the United States, but also with many of our country’s commercial partners. The incorporation of our roses to the Generalized System of Preferences and the signing of the phase-one trade deal are direct results of these actions and evidence the excellent bilateral relations being rebuilt with the United States. This deal is an important step toward a broader trade agreement; it develops greater confidence among public and private actors in both our countries, allowing for the political push needed to begin this negotiation. We are confident that the administrative changes in both countries will not affect the progress achieved in the improvement of our bilateral relations.”

Nathalie Cely, president of the Centro de Competitividad in Quito and former Ecuadorean ambassador to the United States “There is no doubt that political and commercial relations between the United States and Ecuador are at their best. Recently, there have been important advances, such as the elimination of the 6.8 percent tariff for roses (which was requested in 2014 through the GSP system) and the reconstitution of the U.S.-Ecuador Trade and Investment Council in the last two years. Most importantly, negotiators from the United States and Ecuador recently reached an agreement on a first set of general trade issues on which there were no controversies, calling it ‘phase one’ of an eventual U.S.-Ecuador trade agreement. These first areas of agreement are trade facilitation, best practices in regulation, benefits for SMEs and fighting corruption in trade. These developments are very positive and evidence the political will from both countries in eventually reaching a trade agreement. However, there still are complicated issues to be resolved, such as the agreement of a new bilateral investment treaty (which Ecuador denounced in 2017), the negotiation of trade policy on agricultural products and finding a way to solve the existing legal conflicts between U.S. companies and the Ecuadorean state. None of these issues are uncontroversial like those of the phase-one agreement. Eventually, the next president of Ecuador will have to make the decision of whether to continue with the positive momentum of the negotiations or not. Elections will be held in February 2021 and, according to the Click Pollster, Andrés Arauz, of radical left positions, leads the polls ahead of Guillermo Lasso, a conservative banker who sees a trade agreement with the United States as vital. If Lasso wins, we can count on the political will to negotiate a comprehensive trade agreement. This would not be the case with Arauz. Finally, on the U.S. side, it is still early to gauge whether President-elect Biden will align himself with the anti-trade agreement views within his party or will want to distance himself from President Trump’s own animosity of global trade. However, Biden’s former role as the lead in U.S.-Latin America relations during the Obama administration is an encouraging sign of things to come.”

Frank Samolis, partner and co-chair of the international trade group at Squire Patton Boggs: “To begin with, it is important to view the current state of U.S.-Ecuador trade from a historical perspective. Ecuador once received benefits under the Andean Trade Preference Act (ATPA), but was later declared ineligible while two other beneficiaries, Peru and Colombia, went on to negotiate free trade agreements with the United States. Then, during the Correa administration, bilateral relations sunk even further, as Ecuador renounced the bilateral investment treaty and trade discussions were terminated. Then, in November 2018, talks under the auspices of the Trade and Investment Council were resumed after a nine-year hiatus. The announcement by both countries on Nov. 19, 2020 sent a very positive message. The phase-one agreement will likely include provisions on trade facilitation, good regulatory practices and provisions for small and medium enterprises. The tougher issues which lie ahead include Ecuador’s status under the Generalized System of Preferences program, which expires at the end of the year, and market access treatment for agricultural goods such as broccoli, artichokes, roses and tuna. However, the commitment of both countries to engage in productive trade negotiations, after several years of animosity, will incentivize a successful conclusion. The incoming Biden administration is not likely to scuttle these talks, viewing an agreement as a positive reinforcement of the broader geopolitical dimensions. It will likely put a greater emphasis on labor and environmental issues, but otherwise will continue to support the talks moving forward.”

Pablo Arosemena, president of the Chamber of Commerce of Guayaquil: “The signing of the first phase agreement between the United States and Ecuador will address: 1.) trade facilitation, that is, the simplification of international trade procedures between both countries; 2.) the importance of reducing regulatory burdens; 3.) benefits for small businesses through simplified customs procedures in order to enhance their role in value chains; and 4.) how to make progress in the fight against corruption. An example of this is the automation of customs control methods to control and limit corruption. The most important issues, such as tariff reduction for various products, including those that are sensitive (for instance, agricultural items), will be left out of discussion in this phase. However, there is still time for negotiations. From the point of view of the current administration, there is a high probability of reaching an extended trade agreement. It will depend on the results of the next presidential election in Ecuador and how the new government handles trade matters with our main trading partner. If pro-market candidate Guillermo Lasso wins the next presidential election, the trade deal is likely to be executed.”

Germán G. Creamer, associate professor of finance and business analytics in the School of Business at the Stevens Institute of Technology: “Phase one of the trade deal between Ecuador and the United States will facilitate bilateral trade by reducing paperwork and improving regulatory practices. It will also promote small- and mid-size companies, which represent about 82 percent of the companies that trade with the United States, and it will implement anti-corruption practices such as the automation of customs control methods. This first phase reverses the previous Ecuadorean government’s decision to terminate a U.S.-Ecuador bilateral investment treatment in May 2018. Additionally, it accelerates the definition of a U.S.-Ecuador free trade agreement, mirroring similar agreements that the rest of South American Pacific countries (Colombia, Peru and Chile) have already signed with the United States. The free trade agreement is critical as the United States is Ecuador’s principal trading partner and can significantly increase employment and support small- and mid-size companies. The Biden administration may support this broader trade agreement as it has already indicated the importance of recovering U.S. leadership in international markets. This new agreement will require the support of the U.S. Congress, which may approve it to neutralize China’s increasing commercial and financial importance in Latin America. In Ecuador’s case, if the conservative presidential candidate, Guillermo Lasso, is elected, he will support any initiative of free trade with the United States. The main risk is that Andrés Arauz, the candidate of leftist former President Rafael Correa, may put a brake on any new trade initiative with the United States. For this reason, it is essential that the current administration advance as much as possible on a sound U.S.-Ecuador trade deal before elections take place in Ecuador.”

source: The Dialogue
Ecuador US
Subscribe to bilaterals.org weekly