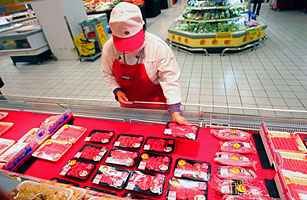 The U.S. Defense Department’s approval of a new arms package to Taiwan on Wednesday was the best new year’s gift that President Ma Ying-jeou could ask for. Ma’s new year started with an embarrassing diplomatic crisis this week over U.S. beef imports. Lawmakers from Ma’s party overturned a U.S.-Taiwan agreement, just signed in October, lifting a ban imposed in 2003 on U.S. beef parts. The new legislation, passed Tuesday, reinstitutes the ban on the import of beef skull, brains, eyes, spine, intestines and ground beef from places with cases of mad cow disease within the past ten years, which includes the U.S.

After a case of mad cow disease was discovered in Washington state in 2003, 65 nations imposed partial or full bans on U.S. beef, plunging the American beef industry’s exports down by over 75%. Those numbers have yet to recover to their 2003 level of over 1.2 million metric tons, even as nations have softened their positions. Japan, the U.S.’s biggest export market, along with Hong Kong, Taiwan and other countries retrenched slightly in 2006, instituting new, partials ban on beef parts thought to be prone to potential infection. South Korea lifted its U.S. beef ban in 2008, a move which led to enormous protests that almost derailed Lee Myung-bak’s presidency. (See the top 10 cases of public panic around the world.)

The World Organization for Animal Health (OIE), the relevant standard-setting body recognized by the World Trade Organization, deemed in 2007 that the U.S. is meeting appropriate beef safety standards. Many Taiwanese, however, are still not convinced. After the new agreement was signed in October, thousands protested in Taiwan, with one student even eating a cow dung burger (worms and all) in front of the presidential office to demand the government renegotiate. "The Ma administration underestimated people’s worries," says Yen Chen-shen, a research fellow at National Chengchi University’s Institute of International Relations. "They never really tried to ensure Taiwanese consumers that this is going to be safe."

With these public fears in mind, Ma’s party lawmakers, who have the legislative majority, joined the opposition this week to pass the controversial amendment. The U.S. immediately expressed its disappointment, saying the move "undermines Taiwan’s credibility as a responsible trading partner." Upcoming bilateral trade talks, originally scheduled for February, have been indefinitely postponed. Taiwan, the sixth largest importer of U.S. beef and the U.S.’s ninth-largest trading partner, had been hoping the talks would pave the way for a Free Trade Agreement with the U.S. Yen says Ma probably was counting on progress in U.S. trade to balance fears over Taiwan’s increasingly close economic ties with China. Taiwan and China are set to talk about a key trade agreement early this year, which has caused concern among the opposition, which advocates a more distanced relationship with its neighbor.

Still, the U.S. Defense Department’s face-saving gift on Wednesday is surely a comfort to Ma, whose popularity was down to 33% in December 2009, after local elections where Ma’s party lost ground. Despite objections from China about selling arms to Taiwan, the U.S. awarded Lockheed Martin Corp the contract to provide Patriot missile systems as part of a $6.5 billion arms sale package to Taiwan passed by the US Congress in 2008. The U.S. missile systems could shoot down Chinese short-range and mid-range missiles. China has over 1000 missiles pointed at Taiwan, a democratic island China claims as its own.

Though some feared the legislature’s move would undermine U.S.-Taiwan ties, ultimately beef is a minor issue, says Loh. As China’s economic and political clout rises, Taiwan is an important strategic ally to the U.S. "The U.S. will go easy on Ma," he says. "After all, Washington needs Taiwan to balance the mainland. I think this is what Ma is counting on."