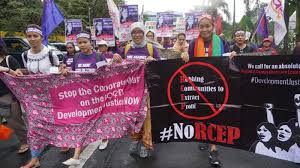 Women’s movement from Asia and the Pacific is angered by the decision of ASEAN and its five trading partners to sign RCEP, a mega free trade agreement. The trade agreement will cover 30% of the world’s population and women farmers, women workers and women-led small enterprises will be the worst hit from this trade agreement. Women’s groups support India for leaving RCEP taking these and other human rights concerns into account.

Leaked chapters of RCEP indicate that it will most likely undermine production of more affordable generic versions of life-saving medicines, negatively impact farmers and indigenous peoples’ rights to seed and food sovereignty, lock-in privatisation of public services, push workers’ wages down and constrain the creation of decent jobs, and restrict the ability of governments to introduce industrial and fiscal policies necessary to protect and regulate in the public interest. In the new post-pandemic reality, these vulnerabilities will be further deepened, marginalising communities even more.

It is deeply disappointing that governments continued to negotiate the trade agreement in the midst of COVID-19 pandemic. “Despite glaring evidence of how neoliberal policies have impacted negatively on the rights, security and wellbeing of majority of the peoples and communities in the Asia Pacific region, governments have signed a trade deal that will make things even worse in the future, especially in the context of the current neoliberal economic crisis exacerbated by the COVID-19 pandemic. RCEP will not help peoples and economies of the region build back better; it will leave us deeper in crisis and destruction,” said Joms Salvador of Philippine Women’s Alliance GABRIELA. RCEP reinforces a destructive development model that existing free trade agreements and the policies of liberalisation, privatisation and deregulation have inflicted upon the world’s poor and particularly poor women. “Women’s groups believe that RCEP is a race to the bottom with women at the bottom,” she added.

“The COVID-19 pandemic crisis should also be a moment to realise how much we rely on farmers, peasants, fisher folks, other food producers, our local market and shorter food distribution networks to get our food. Open market access in RCEP that drastically cuts tariffs of agriculture products will have terrible consequences to small-scale producers in developing countries like Indonesia, which lead agriculture production and will force the country to rely heavily on imports for several food producers. This is particularly detrimental to women, who play a significant role in subsistence and small-scale farming,” said Arieska Kurniawaty, Soliaritas Perempuan, Indonesia.

Despite repeated demands from civil society organisations, the text of the mega trade deal has not been shared with the public or parliaments across the region. “Signing a secretive free trade agreement is not a priority in this COVID-19 pandemic. Further, it is illegitimate nor legal. We know through the leaked documents that the RCEP will largely undermine human rights, environment, nation states’ sovereignty and fundamental principle of participatory democracy. We will continue to fight for all RCEP countries to release the full texts publicly, conduct independent gender, environmental and human rights impact assessment of RCEP, and ultimately cancel this mega free trade deal”, added Misun Woo, Regional Coordinator, Asia Pacific Forum on Women, Law and Development, Thailand.

Asia Pacific Forum on Women, Law and Development (APWLD) is a leading network of feminist organisations and grassroots activists in Asia Pacific. Our 252 members represent groups of diverse women from 27 countries in Asia Pacific. Over the past 32 years, APWLD has actively worked towards advancing women’s human rights and Development Justice. We are an independent, non-governmental, non-profit organisation and hold consultative status with the United Nations Economic and Social Council.