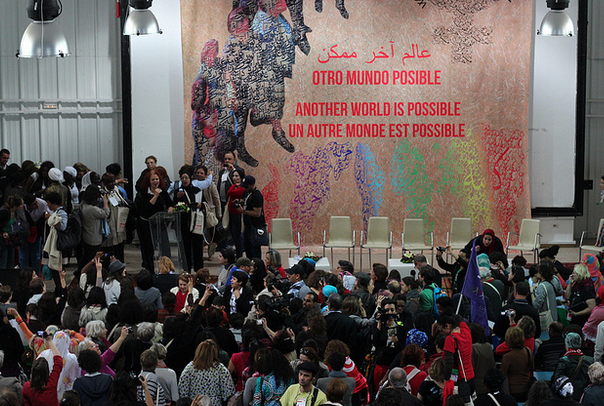 The World Parliamentary Forum was held in Tunis on 26 March 2015 as part of the World Social Forum. Parliamentarians from various countries and political orientations that share the Charter of Porto Alegre, representatives of social movements, and citizens engaged for alternatives to neoliberal policies, adopted the following motion:

The World Parliamentary Forum condemns the abusive power of Transnational Corporations, which has intensified as a result of Free Trade Agreements such as the EPAs, DCFTAs, TISA, TTIP and TPP, and expresses indignation at the impunity they enjoy while violating human rights, destroying the environment or evading tax payments.

welcomes the Resolution of the United Nations Human Rights Council (UNHRC) in establishing an Inter-Governmental Working Group (IGWG) on Transnational Corporations and Human Rights, adopted despite the opposition of the UE, the USA, and some other countries;

calls on national and regional Parliaments to carry resolutions supporting this Working Group that will hold its first working session in July 2015 with the aim of developing a new binding Treaty on Transnational Corporations and Human Rights;

calls on national and regional Parliaments to reject both the Free Trade Agreements (FTAs) that benefit Corporations and major international investors, as well as the abusive Bi-lateral Investment Treaties (BITs), that some governments have already cancelled;

calls on governments to reject Investment to State Dispute Settlement (ISDS) mechanisms which allow TNCs to both escape public justice by using special arbitrary bodies to sue governments for enormous amounts of money and dissuade governments from adopting regulations that protect citizens’ wellbeing, preserve public goods, and protect the environment.

encourages national and regional Parliaments to oblige corporations, by binding norms, to assume in their country of origin, the responsibility for their actions abroad, and those of their subsidiaries ;

calls on national and regional Parliaments to establish a permanent inter-parliamentarian committee to support the work of movements that fight for peoples’ sovereignty and to dismantle corporate power.