EN
ES
FR
DE
HI
NL
PT
JA
ID
TL
Can We Do A Deal With China?
26-Apr-2004
Dairy, meat and forestry exporters stand to gain the most if the government cuts a free trade deal with China and its market of 1.3 billion people.
MierScope: FTA with the US makes good sense
26-Apr-2004
A US-Malaysia FTA will demand strong obligations from Malaysia. It will push us towards greater liberalisation. Complain as we may that such an FTA will be an instrument of economic imperialism, it will not be pragmatic to deny it.
Japan and Mexico agree on conclusion of free-trade agreement
24-Apr-2004 FPCJ
On March 12 Japan and Mexico reached virtual accord on the conclusion of a bilateral free-trade agreement following 16 months of negotiations.
US-Paraguay MOU on IPR (2004)
23-Apr-2004
US-Ukraine BIT (1996)
23-Apr-2004
Thailand Trade Talks with Australia Wraps Up
21-Apr-2004
Thailand and Australia have completed talks on establishing a bilateral free trade area (FTA) agreement, and the pact will go before the Thai cabinet for approval within the next two weeks, according to Deputy Commerce Minister Pongsak Raktapongpaisal.
US Trade Promotion Authority Act (2002)
21-Apr-2004
Regionalism and the multilateral trade system
20-Apr-2004
Regional trade agreements (RTAs) are an integral part of international trade, accounting for almost half of world trade and expected to grow further in the next few years. These agreements operate alongside global multilateral agreements under the World Trade Organization (WTO), and have both positive and negative effects.
Big Brothers Behaving Badly: The Implications for the Pacific Islands of the Pacific Agreement on Closer Economic Relations
19-Apr-2004 Big Brothers Behaving Badly
The Implications for the Pacific Islands of the Pacific Agreement on Closer Economic Relations by Prof. Jane Kelsey - commissioned by the Pacific Network on Globalisation - interim report - April 2004
NAFTA Tribunals Stir US Worries
18-Apr-2004
After the highest court in Massachusetts ruled against a Canadian real estate company and after the United State Supreme Court declined to hear its appeal, the company’s day in court was over.
Bilateral Investment Treaties and Disputes
18-Apr-2004 IATP Trade Observatory
Bilateral Investment Treaties (BITs) have greatly proliferated in the last two decades, and play an increasingly significant role in global trade and investment protection.
PICIS Statement against the Korea-Japan BIT
14-Apr-2004 PICIS Statement against the Korea-Japan Bilateral Investment Treaty
Between 20th and 24th December, representatives from the two countries will meet in Tokyo and finalise the text of the BIT that has been under much criticism from peoples’ movements of both Korea and Japan.
Monsanto comments to USTR on US-Thailand FTA
8-Apr-2004 http://www.us-asean.org/us-thai-fta...
Monsanto Company appreciates this opportunity to submit written comments pertaining to the initiation of negotiations with Thailand on a Free Trade Agreement (FTA) as notified in the Federal Register (69 ER 9419, February 27,2004).
Japan: Free trade with Mexico
5-Apr-2004 Asahi Shimbun
Japan and Mexico have reached a basic accord on free trade. Japan promises to increase imports of pork, oranges and other agricultural products from Mexico, while that country says it will import more steel, automobiles and other industrial products from Japan.
USA-Morocco deal may extend drug patents to 30 years
4-Apr-2004
A free trade agreement due to be signed between Morocco and the USA by the end of this year could threaten access to medicines, several non-governmental organisations (NGOs) warned last week.
The right of everyone to the enjoyment of the highest attainable standard of physical and mental health, Addendum: Mission to WTO
3-Apr-2004 Report of the Special Rapporteur on the Right to Health, UN Human Rights Commission, 60th session
The Special Rapporteur recommends that States be cautious about enacting “TRIPS plus” legislation without first understanding the impact of such legislation on the protection of human rights, including the right to health. Equally, wealthy countries should not pressure a developing country to implement “TRIPS plus” legislation, unless reliable evidence confirms that such legislation will enhance enjoyment of the right to health in the developing country.
SADC appoints Botswana to co-ordinate EPA negotiations
2-Apr-2004 SADC appoints Botswana to co-ordinate EPA
SADC has appointed Botswana to co-ordinate the first phase of negotiations for an Economic Partnership Agreement (EPA) with the European Union. 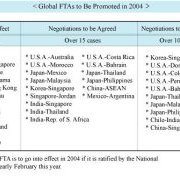 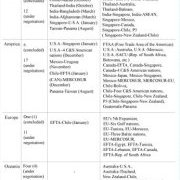