Extend deadline on partnership pact
16-Mar-2007
Civil society groups and other stakeholders in West Africa’s development process have unanimously called on the European Union to extend the deadline for reaching a deal on Economic Partnership Agreements (EPAs).
Costa Rica’s last stand: Widespread resistance halts implementation of CAFTA
16-Mar-2007 Indybay
While the passage of the Central American Free Trade Area (CAFTA in English, TLC in Spanish) is a distant memory in the public political debate, implementation of the treaty continues to meet organized, spirited opposition in Costa Rica. In the US, activists are standing in solidarity with continued opposition and resistance. 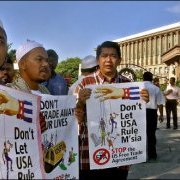 About 200 in protest over Malaysia-US free trade deal
15-Mar-2007 AFP
About 200 people opposed to a free trade agreement (FTA) with the United States gathered for a rare protest outside the Malaysian prime minister’s office Wednesday. 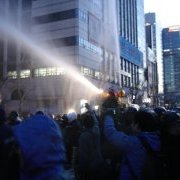 Five-thousand rally against free trade amidst strong police violence
13-Mar-2007
As the 8th round of Korea-U.S. FTA negotiations entered its third day, a peaceful mass rally was held on Saturday in protest of the talks. Police violence was heavy, but the protesters stood strong until the end, even when sticks came down and water cannon was fired on them. At the end of the day, ten were arrested, and as of today, five from labor and student groups are still held in jail. 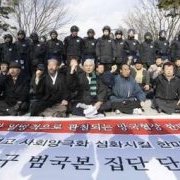 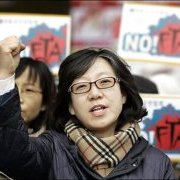 Riot police break up protest in Seoul
10-Mar-2007 Washington Post
Riot police used a water cannon Saturday to break up a noisy but peaceful street protest in downtown Seoul against a proposed free trade agreement between South Korea and the United States. 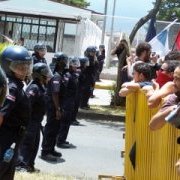 Costa Rica: Why we reject CAFTA
9-Mar-2007 Americas Program, International Relations Center (IRC)
On Feb. 26, tens of thousands of Costa Ricans took to the streets in a demonstration to block ratification of the free trade agreement and reject approval to implement legislation demanded by the United States. Costa Rica is the only country included in the Free Trade Agreement between the United States, Central America, and the Dominican Republic (CAFTA-DR) that has not yet ratified the agreement. A broad grassroots movement in the country is trying to make sure it stays that way.
Declaration of Nyéléni
28-Feb-2007 Nyéléni2007.org
What are we fighting against? Imperialism, neo-liberalism, neo-colonialism and patriarchy, and all systems that impoverish life, resources and eco-systems, and the agents that promote the above such as international financial institutions, the World Trade Organisation, free trade agreements, transnational corporations,and governments that are antagonistic to their peoples...
Cuba calls regional FTA meeting
28-Feb-2007 Prensa Latina
The Continental Social Alliance and its Cuban Chapter convened on Tuesday the 6th Hemispheric Meeting of struggle against Free Trade Accords (FTA) and for people s integration in this capital.
Group calls for halt to US-Malaysia FTA negotiations
28-Feb-2007
Malaysia should stop all negotiations with the US on a free trade agreement (FTA) as it has failed to conduct an assessment on the implications of such an agreement on the people, a grouping of concerned Malaysians urged on Tuesday. 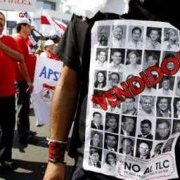 Costa Ricans protest free-trade pact
27-Feb-2007 Seattle Post Intelligencer
Tens of thousands of union members, farmers and political activists marched through Costa Rica’s capital on Monday to protest a free-trade pact with the US they say will be harmful to local businesses.
Entering into a dangerous battle
24-Feb-2007 Bangkok Post
The military-installed Thai government is entering into a risky new battle with farmer’s groups and the anti-FTA movement by pressing ahead with the Thai-Japan free trade agreement. Thousands of farmers, environmental activists and medical patients now plan to stage a mass protest next month against the government’s pro-FTA policy.
Fast approval of text rapped
22-Feb-2007 Bangkok Post
The National Human Rights Commission and FTA Watch yesterday rebuked the Thai government for endorsing the text of the Japan-Thailand free trade agreement without revising the 940-page deal thoroughly. FTA Watch said it would consult with others opposing the agreement to stage a major rally against the interim government if it rushed into signing the deal.
US-Korea trade negotiations get nowhere
17-Feb-2007 OneWorld
"A majority of people are opposed to this," Hyun Lee of the group Korean Americans Against War and Neoliberalism told OneWorld. "None of the benefits of these trade agreements go to ordinary people and ordinary workers. They only go to fatten the pockets of transnational corporations."
KoA No FTA newsletter #3
17-Feb-2007 KoA
For the Korean Alliance Against Korea-U.S. FTA, February and March will become a crucial month for mass mobilization both domestically and internationally.
Statement of concern regarding the proposed EU-ASEAN free trade negotiations
15-Feb-2007
Civil society movements and organisations from ASEAN and Europe express strong concerns about the proposed EU-ASEAN Free Trade Agreement (FTA) slated to be concluded within the next two years. 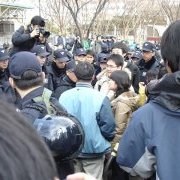 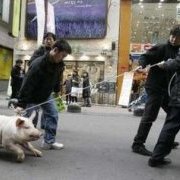 S Korean farmers use animals to oppose US FTA
13-Feb-2007 Asia Pulse
The farmers, wearing jackets emblazoned with messages disapproving of the talks to seal a free trade agreement (FTA) between the two countries, stormed into the bustling Myeongdong fashion district in several carloads and released one pig, six goats and about 300 radishes.
US and Korean labor unite to protest trade agreement
12-Feb-2007 PR Newswire
Leaders of labor federations in the United States and Korea today joined forces to protest the ongoing negotiations for the US-Korea Free Trade agreement (KORUS FTA).
0 | ... | 1800 | 1820 | 1840 | 1860 | 1880 | 1900 | 1920 | 1940 | 1960 | ... | 2100
Subscribe to bilaterals.org weekly