Signs of an emerging France-Algeria-Tunisia axis to restrain Morocco
7-Sep-2022 Morocco World News
The visit was thus a telling declaration of intentions from both the Tunisian and Algerian regimes, who have ever since appeared to be striving to deepen bilateral ties to form a Maghrebi bloc to undermine Morocco’s strategic interests. 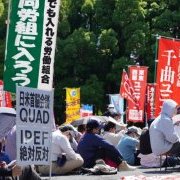 Q & A on IPEF (“Indo-Pacific Economic Framework for Prosperity”)
5-Sep-2022
The IPEF is the US’s latest strategy to be the global rule-maker on trade, food production, digital and data, the climate crisis, regulating services, corporate power to influence new laws, multinationals’ tax rates, and much else.
Trade agreement: Why India made a U-turn on free trade deals
25-Aug-2022 Yahoo
Increased collaboration between countries like India, Australia, Japan and the US reflect their growing anxiety over China’s control over supply chains and its ability to disrupt them.
On the trade deal with the Europeans
11-Jul-2022 Scoop
The official EU commentary on the deal mentions (a) the wider political ties that New Zealand has with Europe, and (b) NZ’s welcoming mat to Europe’s foreign investors.
Will Biden’s proposed Latin America deal seek to repair past ‘free trade’ failures?
7-Jul-2022 Public Citizen
President Joe Biden announced the launch of a new economic proposal called the Americas Partnership for Economic Prosperity to deepen economic ties in the hemisphere.
Biden’s Indo-Pacific Economic Framework is a paradigm shift
4-Jul-2022 Foreign Policy
The United States can no longer afford to buy geopolitical allies with market access.
China floats BRICS free-trade deal, while Russia’s Vladimir Putin calls for an alternative to US dollar
24-Jun-2022 Yahoo Finance
China has proposed a free-trade bloc among the five BRICS countries in a bid to enhance economic ties within the decade-old grouping, as its geopolitical rivalry heats up with the United States.
Why the US’ Indo-Pacific Economic Framework is really all about India
17-Jun-2022 South China Morning Post
The framework is another attempt to bring India into the Western fold while positioning it more strategically in the Indo-Pacific trade network
US analyzes excluding Nicaragua from CAFTA for exchange with Russian troops
15-Jun-2022 Q
Joe Biden’s government is analyzing the possibility of launching "strong measures" against Managua at the invitation of external armies, especially "one that has invaded another country," says a US official.
Korea pushes for trade pacts with Middle East amid geopolitical shift
15-Jun-2022 The Korea Times
Korea seeks stronger presence in the region as tensions between Israel and Arab countries thaw.
How tension with Russia & China is pushing Europe to do more business with India
6-Jun-2022 The Print
The European Union (EU) is now looking to do more business with India by way of greater investments in Europe as tension with Russia over the Ukraine war and geopolitical concerns with China pose massive challenges to the bloc and the world at large.
China to continue pushing for Pacific Island nations to sign regional trade and security agreement
3-Jun-2022 ABC
China’s government says it remains confident it can strike a sweeping trade and security agreement with 10 Pacific Island states despite being forced to shelve its proposed agreement.
Pacific nations walk away from trade and security deal with China as Australia aims to ’build stronger family’
3-Jun-2022 ABC News
Pacific Island countries have agreed not to sign a region-wide trade and security deal with China after a high-level meeting between Chinese Foreign Minister Wang Yi and his counterparts from 10 Pacific nations in Fiji.
India sees a second chance to pivot to the Indo-Pacific in new group that excludes China
2-Jun-2022 CNBC
Except for India and the US, all other nations in IPEF are part of the RCEP rival bloc. India’s aversion to a pact which includes China has geopolitical considerations at its root.
China offers South Pacific nations security, free trade agreements
31-May-2022 France24
China has put forward plans to dramatically expand security and economic cooperation with South Pacific nations, in what one regional leader called a thinly veiled effort to lock them into "Beijing’s orbit"
The what, where, how and why of the Indo-Pacific Economic Framework
27-May-2022 Madhyam
Unlike traditional FTAs, the IPEF employs a menu-based approach in which countries would launch separate negotiations under the four pillars of the initiative.
Indo-Pacific Economic Framework is not an FTA: 5 things to know
20-May-2022 Nikkei Asia
Tailored pact seeks to counter China’s clout while protecting US workers.
The US kicks off neocolonialism via Indo-Pacific Economic Framework
20-May-2022 CGTN
The IPEF represents continuity between the colonialist past and neocolonialist present in the Indo-Pacific region.
‘Indo-Pacific Economic Framework’ not a blessing to Asia
16-May-2022 Khmer Times
IPEF is created to encourage regional economies to “decouple” from the Chinese market by leading them to alternative supply chains.
What is India-EU Trade and Technology Council, and how it will help ongoing FTA negotiations
10-May-2022 The Print
Council will focus on areas like 5G and AI, seek to deepen cooperation in trade and security. Experts say it’ll ’smoothen’ overall FTA negotiations between India and EU.
0 | 20 | 40 | 60 | 80 | 100 | 120 | 140 | 160 | ... | 480
Subscribe to bilaterals.org weekly