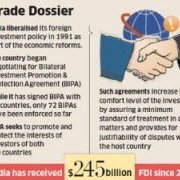 Voda seeks Netherlands treaty to snub govt, will others follow?
30-Mar-2012 First Post
Fearing the Indian government will use new tax laws to trap it back around Rs 12,000 crore in taxes, the world’s largest mobile operator, Vodafone, may invoke a bilateral investment treaty between India and the Netherlands to avoid doing so.
2G: Telenor plans to invoke India-Singapore treaty
29-Mar-2012 Economic Times
Norway’s Telenor will seek ’compensation for all investment, guarantees and damages’ if the Indian government fails to sort out issues related to its licence cancellation within the next six months, the company said.
Canada seeks to carve out agriculture, telecom in EU trade talks: documents
29-Jan-2012
Leaked documents from the Canada-European Union free trade talks suggest Ottawa is seeking to carve out telecommunications and agriculture from any agreement.
Top U.S. companies urge new Internet trade rules
6-Nov-2011
Google, Microsoft , Citigroup , IBM , GE and other top-tier American companies on Thursday urged the United States to fight for trade rules that protect the free flow of information over the Internet.
Hitch in bid to curb phone roaming costs
18-Jul-2011 SMH
Australia’s Department of Foreign Affairs and Trade is investigating if the introduction of price caps on mobile roaming fees will have an impact on the free-trade agreement with the US and agreements with Pacific countries.
ISPs targeted in Pacific trade agreement
13-May-2011
Representatives from Australia’s internet industry have called for full disclosure of a proposed free trade agreement between the United States and its allies in the Pacific, concerned that the deal asks ISPs to shoulder onerous burdens around copyright infringement.
11 companies apply to provide cell phone service in Costa Rica
9-Sep-2010
The country’s cell phone market was opened to private competition with the entry into force of the Central American Free-Trade Agreement with the US (CAFTA) on Jan.1, 2009.
Oman-US FTA?
18-Oct-2008 Zawya
The two major areas holding up the implementation of the FTA are the liberalisation of the telecom sector and policy changes changes in the Sultanate’s software policy.
Laing: Telecom, real estate excluded from EPA negotiations
12-May-2008 Bahama Journal
Telecommunications and real estate in The Bahamas are two sectors that are, for now, off limits for negotiations under the proposed Economic Partnership Agreement between the European Community and CARIFORUM, State Minister for Finance Zhivargo Laing reported yesterday.
Costa Rica telecom market seen opening soon
4-Apr-2008
Costa Rica, one of the few Latin America countries still with a state-run telephone sector, is expected soon to open to big foreign players as part of a trade deal with the United States.
UNI solidarity mission urges Costa Rica to reject the proposed Free Trade Agreement
24-Aug-2007 UNI Telecom
UNI Telecom Americas President told the Minister of Labour and Deputies from the Costa Rica National Assembly that the country should look to lessons from other free trade agreements, including from his country Mexico, where poverty had not decreased and the minimum wage was in effect lower than before the 43 trade agreements signed by Mexico.
Namibia: Communication industry threatened by EPA talks
14-Jul-2007 AllAfrica.com
Between 2004 and 2006, the Naimibian government made more than N$200 million in dividends alone from fixed telecommunication lines, provision of bulk communication infrastructures, and on mobile phone services. Liberalising the sector through the EPA with the EU may poke a hole to its bulging purse. Namibia is also worried that the inclusion of a New Generation clause may hamper the country’s expansion programme into SADC market.
Internet firms on alert over FTA
6-Apr-2007
Internet firms providing music, videos and other multimedia files are watching out for the government interpretation on the free trade agreement, as its draft contains much tougher anti-piracy measures on digital content than current regulations.
New $19B arbitration case threat to Turkish government from Dutch company on Telsim sale
17-Mar-2007 The New Anatolian
Dutch investment company Saba Fakes, who claim to hold the biggest part of shares of Turkey’s second big GSM operator Telsim, is preparing to file an arbitration case at International Arbitration amounting to 19 billion dollars in reparations.
Dominican Telecom chief says Free Trade means changes
15-Mar-2007
The president of the Dominican Telecom Institute (Indotel) affirmed that the Free Trade Agreement with the United States and Central America (DR-CAFTA) will force the country to transform the free zones into high technology industrial parks to be able to compete in the world market.
International court rules in favor of Hungary in Telenor case
21-Sep-2006
The International Centre for Settlement of Investment Disputes (ICSID) has ruled in favor of the State of Hungary in a case brought against it by Norwegian telco Telenor, business daily Világgazdaság reported on Monday.
UAE to resist US pressure to open telecoms sector: minister
12-May-2006
The United Arab Emirates will resist pressure in free trade talks with the United States to open its telecommunications sector to foreign investors.
Korea pledges to protect rice market in FTA talks
24-Apr-2006 Korea Times
The Ministry of Finance and Economy said that it would exert all-out efforts to shelter the Korean rice market from an influx of US agricultural imports after the enforcement of the proposed Korea-US Free Trade Agreement.
US investors seek to secure the level of rights enjoyed in their own country
7-Mar-2006
The USTR clearly stated in a negotiation report submitted to the US Congress that American investors should be able to enjoy the same rights in Korea as the ones that they enjoy in the US according to legal principles and practices.
0 | 20 | 40 | 60
Subscribe to bilaterals.org weekly