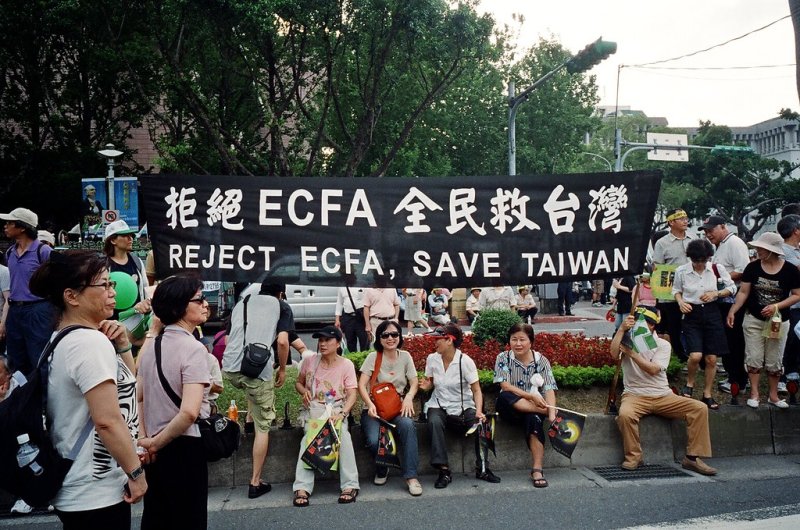 Calls for safeguards surge as Taiwan enters post-ECFA era
20-Oct-2010 PCT
Despite much controversy, the Ma administration proceeded to sign an Economic Cooperation Framework Agreement with China effective September 12, 2010, and Taiwanese people woke up to find themselves plunged into a post-ECFA era.
ECFA to widen income disparity: forum
12-Sep-2010
Experts at a forum on economics yesterday said the Economic Cooperation Framework Agreement (ECFA), which came into force yesterday, would exacerbate income disparity and unemployment in Taiwan.
ECFA heralds cross-strait government-to-government links: MAC
12-Sep-2010
Taiwan and China will be able to develop government-to-government links under the economic cooperation framework agreement (ECFA) signed in June, which will help boost mutual understanding and goodwill, a Taiwanese official said in the Belgian capital Friday. 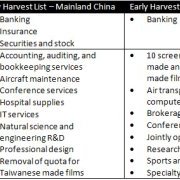 Details of China-Taiwan Economic Cooperation Agreement released
7-Sep-2010 Asia Briefing
More information has come through recently regarding the specific goods and services that will likely be affected by the China-Taiwan Cross Straights Economic Cooperation Framework Agreement (ECFA) which was signed back on June 29 in Chongqing, China.
Ma can no longer rely on gloomy economics
28-Aug-2010
On Thursday, the Taiwan Economic News reported that Taiwan’s export growth in the second quarter of this year was the highest of “Asia’s Four Dragons.” With year-on-year export growth at 46.2 percent for the quarter, along with 12.5 percent overall economic growth and a 1.1 percent inflation rate, Taiwan’s economic recovery seems certain.
ECFA to help with Taiwan’s FTA efforts: Japanese expert
26-Aug-2010
The economic cooperation framework agreement (ECFA) Taiwan signed with China in June is expected to spur interest among other countries in the region in forging free trade agreements (FTAs) with Taiwan, a former Japanese economics official said in an article published Thursday in the Nihon Keizai Shimbun, a Japanese daily.
ECFA overlooks human rights: watchdog group
20-Aug-2010 Taipei Times
A watchdog organization yesterday accused the Taiwanese government of overlooking human rights and environmental issues while developing closer economic ties with China. 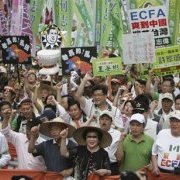 English version of trade pact with China to be posted online
17-Aug-2010
Taiwan’s Ministry of Economic Affairs decided Monday to make a virtue of necessity by granting a request by the opposition Democratic Progressive Party to make public the English version of Taiwan’s economic cooperation framework agreement (ECFA) with China.
Dancing Around the WTO
16-Aug-2010
Whether possessing formal statehood or not, Taiwan like all other 152 members of the World Trade Organization has to elbow its way through foreign trade disputes. Sometimes it loses, sometimes it wins. But it has to abide by WTO regulations, one of which requires the reporting of trade agreements.
Taiwan government faces challenges after ECFA: scholars
14-Aug-2010
The signing of a historic trade pact between Taiwan and China was just the start of a wide range of economic and political tasks for the Taiwanese government to overcome and cautiously review, scholars said.
0 | 10 | 20 | 30 | 40 | 50 | 60 | 70 | 80 | ... | 140
Subscribe to bilaterals.org weekly