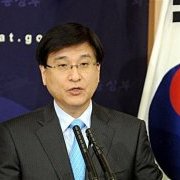 EU automakers urge Brussels to ditch SKorea trade deal
29-Sep-2009 AFP
European auto manufacturers on Monday urged Brussels not to sign a free trade agreement with South Korea due to be inked over the coming days. S. Korea to build farming infrastructure in Tanzania
24-Sep-2009 Yonhap
South Korea will develop 100,000 ha of farmland in Tanzania and make inroads into European markets, thanks to the EU-Korean FTA, a state-run rural development corporation said Thursday.
Korea, Italy to expedite FTA
14-Sep-2009
The leaders of South Korea and Italy agreed to expedite a free trade agreement between Seoul and the European Union yesterday in a summit in which culture eclipsed politics.
S Korea, EU to initial free trade deal next month
10-Sep-2009 Xinhua
South Korea and the European Union will initial their bilateral free trade agreement in October as the both sides completed legal reviews of the deal this week, Korea’s Ministry of Foreign Affairs and Trade said on Thursday.
Brussels divided over Korean trade deal
23-Jul-2009 BusinessWeek
An agreement between the EU and South Korea worth billions of dollars has been put on hold after politicians balked at trade conditions
Korea, EU conclude FTA talks
14-Jul-2009 The Korean Herald/ANN
Korea and the European Union Monday declared the conclusion of more than two years of negotiations for a free trade agreement.

EU trade deal would sell cars, hurt farmers
13-Jul-2009 Joong Ang Daily
The Korea-EU free trade agreement, if it crystallizes, is set to deal a blow to Korea’s agricultural sector, since the average tariff on imported farming products is a relatively high 41.6 percent.
S. Korea, EU to announce conclusion of FTA later Monday: official
13-Jul-2009 Yonhap
South Korea and the European Union (EU) have reached agreement on a proposed free trade deal, leaving only initialing and signing of the agreement before it can be submitted to their respective legislatures for ratification, a South Korean official said Monday.
South Korea-EU FTA’s poisonous articles
13-Jul-2009 Hankyoreh
Although the Lee Myung Bak administration is not revealing any concrete details, if you look at the draft agreement that has been unofficially confirmed, the content of the South Korea-EU FTA is just as worrisome as that found within the FTA with the US.
EU-South Korea trade pact marks trouble, Ford says
10-Jul-2009 Reuters
A proposed trade pact between South Korea and the European Union is one-sided and could threaten automobile manufacturing in Western Europe, a top Ford Motor Co executive said on Thursday.
0 | ... | 50 | 60 | 70 | 80 | 90 | 100 | 110 | 120 | 130 | ... | 180